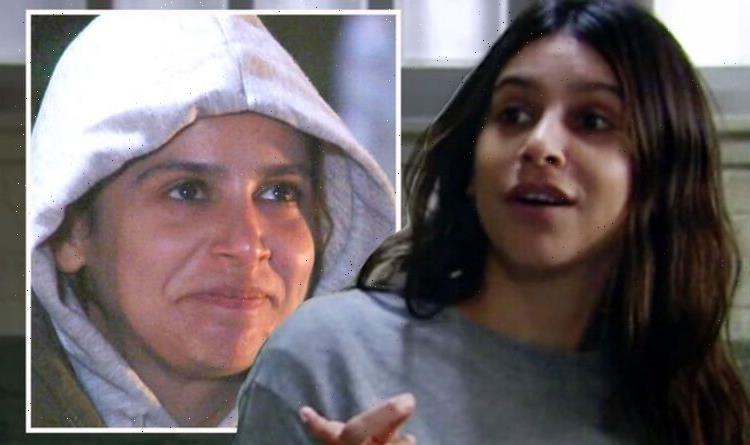 Meena (played by Paige Sandhu) has been serving time behind bars in recent weeks on Emmerdale, following her arrest in February when she was charged with over 20 crimes. The murder trial has been one of the most anticipated moments of the year, with viewers of the ITV soap set to be glued to their television sets this week as they discover how the storyline is going to conclude. With twists and turns along the way, it could be the villain who will get some help in ensuring she escapes from prison and continues to terrorise people with her serial killer ways.

Off-screen, Meena has been developing a very inappropriate relationship with her prison officer, Ian Beaker, with fans being given a glimpse of this bond in a few brief scenes last week.

The prison official seems to have taken a liking to the villain, as she has used her powers of manipulation to control him.

As her trial approaches, it seems he is the only one on her side as he has been gifting her with amenities from the outside world.

Ahead of the gripping trial episodes, the show has released a clip of the serial killer speaking with her new love interest.

Asking Ian how she should look for her big moment in court, Meena is appeased when he tells her she should let her hair fall down instead of tying it back.

“Oh, you prefer me au naturel, huh? I’ll remember that,” the villain replies in a flirtatious tone, manipulating Ian with her charm.

“Someone is in a good mood,” the prison officer remarks, to which the killer gleefully adds: “Ian, today is the day, right?”

“Unbeatable and I cannot think of anyone I would rather share my handcuffs with,” she continues, knowing she has Ian on her side.

Although he looks slightly uncomfortable, he is rather happy to be getting some attention and gives Meena everything she needs.

Today is the day

As she arrives in court, Ian will be by her side and the killer will give the performance of her life to try and persuade the jury she is not guilty.

Meena will throw everyone under the bus to make herself seem like the victim, including her sister, Manpreet Sharma (Rebecca Sarker), and her old boss, Liam Cavanagh (Jonny McPherson).

Unfortunately, her powers of manipulation might not work in the courtroom and by the end of the week, her position might not be looking too good.

With the verdict in, the villain will be furious to discover she has been found guilty of nearly every charge put upon her.

This means she will be facing years behind bars for her crimes and it is very unlikely she will be given the means for freedom.

However, knowing he wants to be with her but can’t be if she is behind bars, Ian could help Meena escape from prison.

This way, the pair could be together in the outside world and they could go on the run as he would never be able to work in a jail again.

Ian wouldn’t realise the killer would only want him to help her escape and she doesn’t really envision a life for them together away from prison.

He would do just enough to ensure she is far enough away from the Dales for no one to recognise her and from this point, she would leave him high and dry.

Those who have watched the clip ahead of this week’s drama have taken to Twitter to express their thoughts on this possible twist.

Viewer Pete wrote: “Would not be surprised if that prison guard helps Meena escape after she is set down for life #emmerdale.”

Michael added: “#emmerdale That prison guard is a proper numptie.”

Heidi shared: “No! Don’t let her get out! Mind you that prison guard has eyes for her. He’s not going to let her escape, is he?

“Perhaps she falls off the prison roof and gets killed if they try and escape. Punishment for what she’s done,” they added.

“If she gets off, I can guarantee you will lose viewers,” Caroline commented on the social media platform.

The soap star said: “Of course, I’m going to miss her. I think the show will miss her. I always say that. But I don’t think it’ll be long before we see her on our screens again in some other incarnation.

“We text each other the other day about it. I can’t allow myself to feel sad about it because I just feel that our relationship is so much more than Emmerdale.

“Yes, we had the good fortune to meet on Emmerdale, but it’s not where it ends. For me, anyway!

“It’s been wonderful. I can’t say any more than that. It’s been fabulous.”