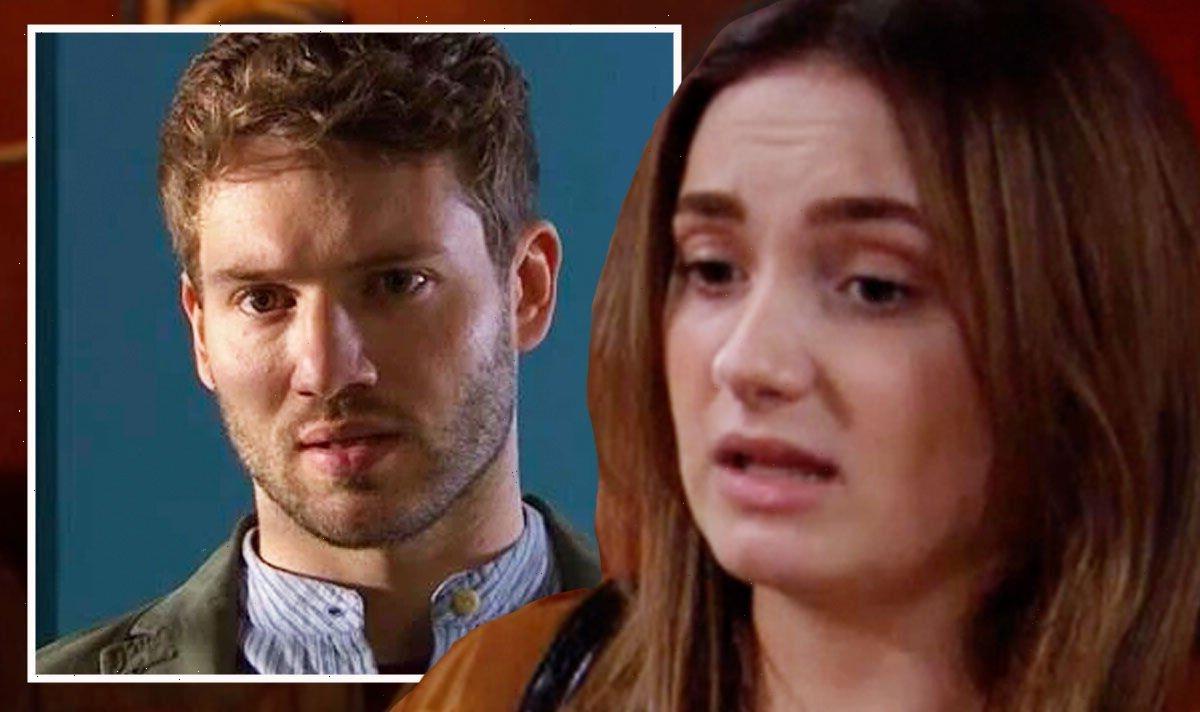 Gabby (played by Rosie Bentham) is terrified Jamie (Alexander Lincoln) is going to walk back into the picture and demand he has custody of their son, Thomas Tate. Having supposedly died last year in a tragic accident, his return to the Emmerdale visit would be quite the surprise, given even his mother, Kim Tate (Claire King), has no idea he is alive and breathing. For now, it is only Gabby and Dawn Taylor (Olivia Bromley) who know the truth but another young woman could also discover the mother of one’s secret whilst she was alone on her own at Home Farm. But could this have also led her into Jamie’s evil clutches as he returns to the ITV soap?

The episode started with Gabby taking on Amelia Spencer (Daisy Campbell) as a babysitter for Thomas after Laurel Thomas (Charlotte Bellamy) suggested the youngster could help out.

Wanting to make a good impression, the young schoolgirl dressed formally for what she believed to be an interview for the role.

Little did she know, Gabby was more than happy to take her on and she had full faith the churchgoer was going to take good care of her son.

To get the practice in nice and early, she left Thomas with Amelia for the day as she went off shopping, meaning the baby sitter had full access to Home Farm.

Away from the drama on-screen, it could be Amelia decided to go for a walk around the grand establishment to get her bearings.

Going into Thomas’ room, she could have found a diary which Gabby has been using to keep notes on her thoughts about Jamie’s return.

Having believed the father of two was dead, Amelia would have been horrified to realise he was alive and this might not have been the biggest shock of the day.

She might have seen the man himself, who took the opportunity to pay his son a visit, having been watching the house and therefore he would have known Gabby and his mother would be out for the day.

Amelia would have wanted answers when she came face to face with Jamie, asking him why she shouldn’t call the police.

Being the master of manipulation, he could have spun a tale about how Kim and Gabby had teamed up against him, leaving him with no choice but to fake his death.

Not expecting you to sit there staring at him

With Amelia starting to fall for his lies, he could have asked her a favour; to keep a close eye on his son and to not fall for the sweet and innocent person Gabby was pretending to be.

Having found herself under his spell, the young schoolgirl could have agreed but she would have needed him to leave as Thomas’s mother would have been returning soon.

Leaving his contact details with the teenager, Jamie would have asked her to message him on updates about Thomas and he would begin putting a plan together to get his son back.

This is why when Gabby returned from shopping, Amelia seemed so keen to keep herself as close to Home Farm as possible.

When the mother of one walked through the door, the youngster was scrolling through her phone and she quickly explained herself.

She might have been messaging Jamie at this point but she told Gabby she had been reading books to Thomas and keeping him entertained.

Seemingly falling for the lies, Gabby said: “Don’t be daft. I’m not expecting you to sit there staring at him [the whole time].

“Especially when he is asleep. It would be a bit weird. So he is obviously fine with his new babysitter, then?” she asked Amelia.

“I reckon so,” the teenager replied before she tried to move the conversation back to Gabby her day out shopping.

The mother of one proceeded to pull out a dress she had bought and Amelia started to talk about how much it must have cost.

Seemingly trying to see if she could get some more money for looking after Thomas, Amelia mentioned how she had her eyes on some clothes she wanted to get but couldn’t afford.

Gabby told her she would make more than enough money in a few weeks but Amelia also said she would need another address to send them to so Dan Spencer (Liam Fox) didn’t get suspicious.

The mother of one told her babysitter to send the parcels to Home Farm and she could pick them up whenever she wanted.

Amelia was extremely grateful but this could have been a ploy to ensure she had access to Home Farm when she needed it to follow Jamie’s plan.

However, will she be able to keep her role a secret or will she leave evidence around for someone to put the pieces of the jigsaw together?

Although there have been hints given Jamie is going to return, there has been no physical sighting of him since last year.

Speaking about the plot twist the character is still alive a few weeks ago, the actress who plays Gabby, Rosie, said she would like to see him back.

The soap star said: “I think Alex [Jamie] coming back would be great. It would certainly kick off a lot of drama and would be really fun to watch that play out.

“And he hasn’t met his son yet! I’d love for him to come back, however, if it came to it, I don’t really want to be kicked out of Home Farm, so if we could come to some sort of agreement first that would be great!”

Is Amelia going to help Jamie get back what he wants?