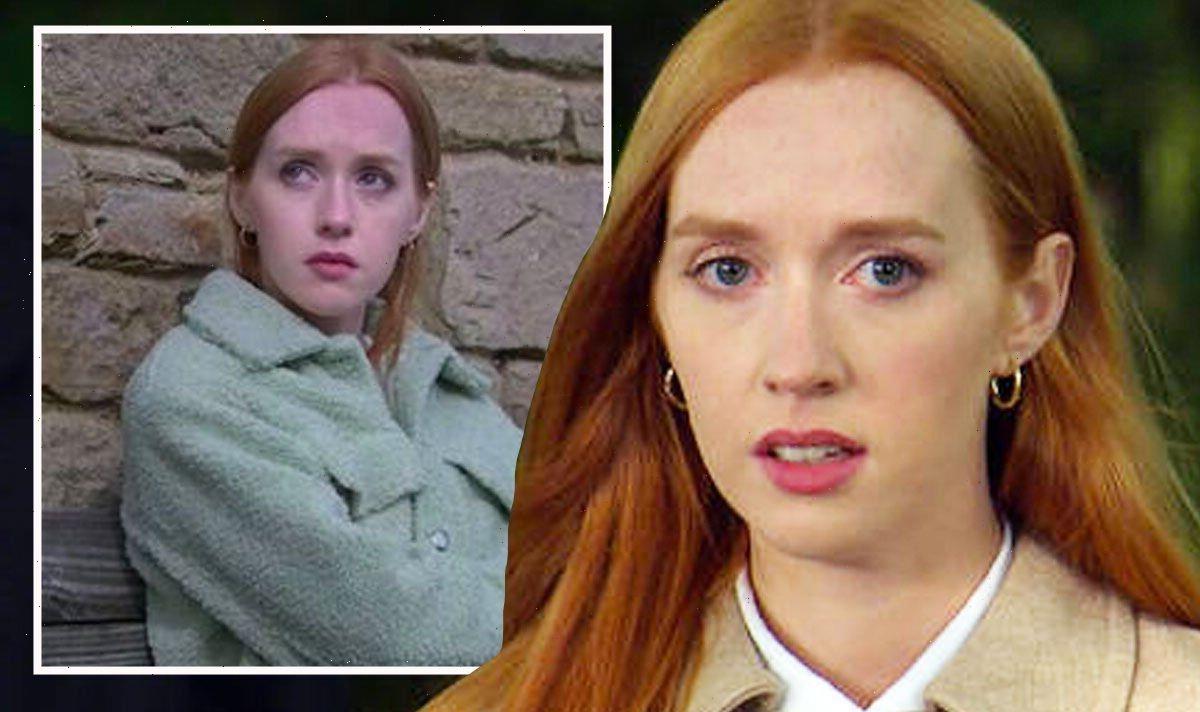 Chloe (played by Jessica Elland) has found herself in a messy love triangle recently on Emmerdale, as Noah (Jack Downham) has been fighting to be seen by her whilst she has been pining over Nate Robinson (Jurell Carter). So far, she has managed to keep her friendship with Noah separate from her blossoming relationship with her new love interest but in upcoming scenes, they will begin to cross over. Unfortunately, it doesn’t seem like it’s going in the right direction and as the storyline comes to a head, viewers of the ITV soap could finally be introduced to Chloe’s father.

The drama continues in next week’s episodes as Chloe and Noah go for a drink in the pub as friends, with the former having no idea the young man knows she has been sneaking off to meet Nate.

Not wanting her to know he knows her secret, Charity Dingle’s (Emma Atkins) son keeps tight-lipped as he paints on a smile.

When she goes to the toilet, however, Noah becomes a lot more sinister as he gets his hands on the young woman’s mobile phone.

It seems he is going to steal the device and this could possibly be because he wants to get her father’s private number.

Since Chloe arrived in the village, her father has been absent as he is currently serving time behind bars for tax evasion and money fraud.

However, with the man having so many connections to the outside world, Noah knows he would have a device of some kind in prison.

Finally getting hold of the number he needs, Noah could contact Chloe’s father and tell him all about how an older man is trying to make advances on his daughter.

With this information, the off-screen character would decide he needs to come up with a plan to get out of jail and back by Chloe’s side.

As he tries to find means of securing his freedom, he could tell Noah to keep him updated and continue to play innocent.

Once he is finally out, by unconventional means no doubt, he will make his way to the village and make his grand arrival.

There could be more stories with her dad

The villagers would be intrigued by Mr Harris, having heard so much about him and the danger he possesses to those who cross him.

Despite her father being in close proximity, Chloe will continue to play with fire as she makes secret visits to Nate.

As the newcomer begins to notice the subtle glances between his daughter and the village heartthrob, he would finally know his target.

With a plan in mind, he could take down Nate in the dead of night to make sure no one sees it was him who murdered the farmhand.

Chloe, along with many others in the village, would point the finger of blame at Mr Harris as Nate died around the same time he arrived.

But, the newcomer would be one step ahead of the game as he would already have an alibi in place to prove he couldn’t have done it.

As Chloe tries to uncover the truth, she could realise it was Noah who tipped her father off and he is the reason the newcomer has arrived out of the blue.

But she could be putting herself in danger as it seems Noah would go to about any length to make sure she is his and only his.

The actress who plays Chloe, Jessica, has teased her character’s father could be arriving at any time as it seems there is a lot more to learn.

Although Chloe’s past has been touched upon in recent months, viewers still don’t know what she and her father’s relationship is like.

Jessica said: “There could be more stories with her dad. There is so much we haven’t learned yet and so many questions unanswered.”

Teasing how Mr Harris could be appearing in the village anytime soon, she added: “Yes, I definitely think there’s potential.

“I think it would be really interesting to see how or when or if he comes into play,” the actress explained in an interview with Digital Spy.

Many viewers have guessed her father could be someone who is already known to the villagers and a villain in particular.

However, could they be right or is this someone completely new who is joining the cast?

Taking to Twitter, viewers have been sharing their thoughts on the recent storyline between Chloe, Nate and misogynist Noah.

Rachel added: “Not quite sure where this Chloe fits into the village #Emmerdale,” but will all be revealed when Mr Harris finally arrives?