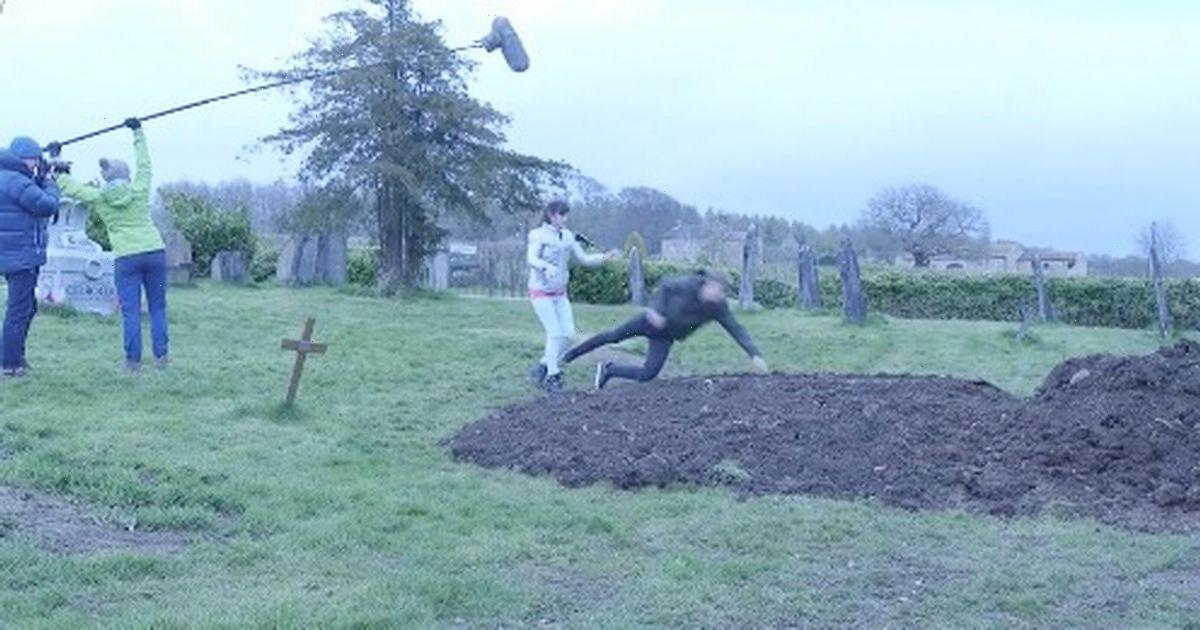 Emmerdale has shared behind-the-scenes secrets from the ITV soap's explosive flash forward week of episodes, which aired Monday 9 May to Friday 13 May.

Emmerdale captioned the video with: "Ever wondered how we film dangerous scenes safely?! Well wonder no more! Here's how it's done… #Emmerdale #BehindTheScene @itv @itvhub @WeAreStv."

In the video, it sees Noah actor Jack Downham and Kerry Wyatt actress Laura Norton rehearsing the scene when Kerry throws Noah in a muddy grave after discovering he had been stalking Chloe Harris.

The ITV soap revealed that they used crash mats to practice the scene before adding lots of "soft things" to land on, such as cardboard boxes, inside the grave for the explosive moment.

While Cain's almost deadly car crash with Chas Dingle, where he was saved by enemy Al Chapman, used fake smoke to give the illusion of a serious vehicle accident.

The ITV soap made sure they did plenty of safety checks with the telephone poll, which landed on the car after Cain escaped, carefully lowered for the scenes.

Viewers were quick to comment on the behind-the-scenes video, as well as the dramatic week of flash forward episodes.

One person said: "Amazing scenes tonight glad no one died, and so many different stories. Just hope all cast not too tired."

A different account put: "So epic! Well done to everyone involved. Ready for the 50th celebrations now. Any hints on what we can expect?"

For all the latest cast updates and juicy Emmerdale spoilers, sign up to our daily OK! Newsletter . Emmerdale continues weekdays at 7:30pm on ITV.