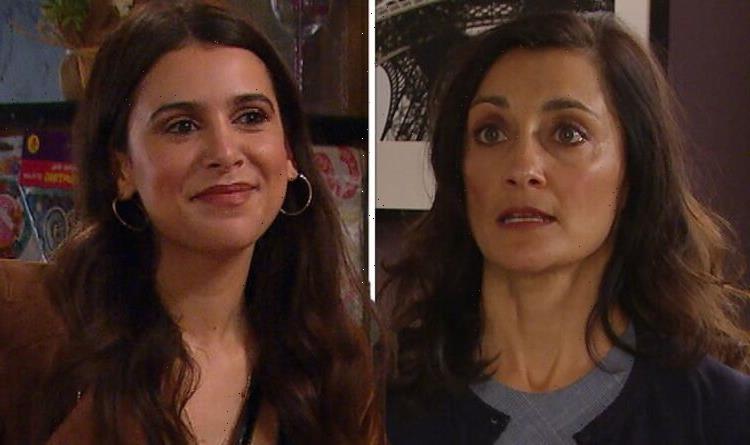 ITV soap fans have watched Meena Jutla (played by Paige Sandhu) cause havoc in Emmerdale over the past year as she murdered several villagers and committed several other crimes. She recently traumatised her sister Manpreet Sharma (Rebecca Sarker) further by stirring up yet more drama at her plea hearing. While Meena confessed to some of her crimes, she pleaded not guilty to the murders of Leanna Cavanagh (Mimi Slinger), Andrea Tate (Anna Nightingale) and Ben Tucker (Simon Lennon). However, one star from the show has suggested that when the case goes to trial, Meena could “get away with it”.

Recently on Emmerdale, following Meena’s plea hearing, Manpreet suffered a panic attack as the pressure of testifying overwhelmed her.

Her partner Charles Anderson (Kevin Mathurin) urged Manpreet to put her own mental wellbeing first and refuse to testify against her sister.

Manpreet agreed that it might be the best decision, but will she stick to her guns or change her mind at the last minute?

Emmerdale actress Rebecca Sarker, who plays Manpreet, recently opened up about her character’s emotional struggle in an interview with Express.co.uk and other press.

The actress revealed Manpreet is very aware of how crucial her evidence could be in the case.

“As far as Liam and Charles are concerned, you know, she really feels that she’s on her own,” she said.

Detailing Manpreet’s emotions, Rebecca said: “It’s basically me, myself and I. You know, it’s me here.

“I’m the one that’s going to be on my own. Sort of nobody else can help me, she confessed to me.

“I’m the sort of star witness. I’m the one who can either bring her down or she may well get away with it.

“So it’s a huge burden for Manpreet really,” the soap star explained.

Rebecca suggested Meena could be found not guilty if Manpreet fails to take to the stand.

The actress explained how the manipulative serial killer could manage to get a jury on her side.

“You know, nothing is beyond the realms of possibility as far as Meena is concerned,” she insisted.

Teasing ahead, the soap star added: “Anything is possible!”

Could Meena get away with the murders of Leanna, Andrea and Ben?

Rebecca seems to be hinting everything will come down to Manpreet’s decision whether or not to testify against her sister.

Will Manpreet take to the stand at the last minute and save the day or could Meena get away with the murders?