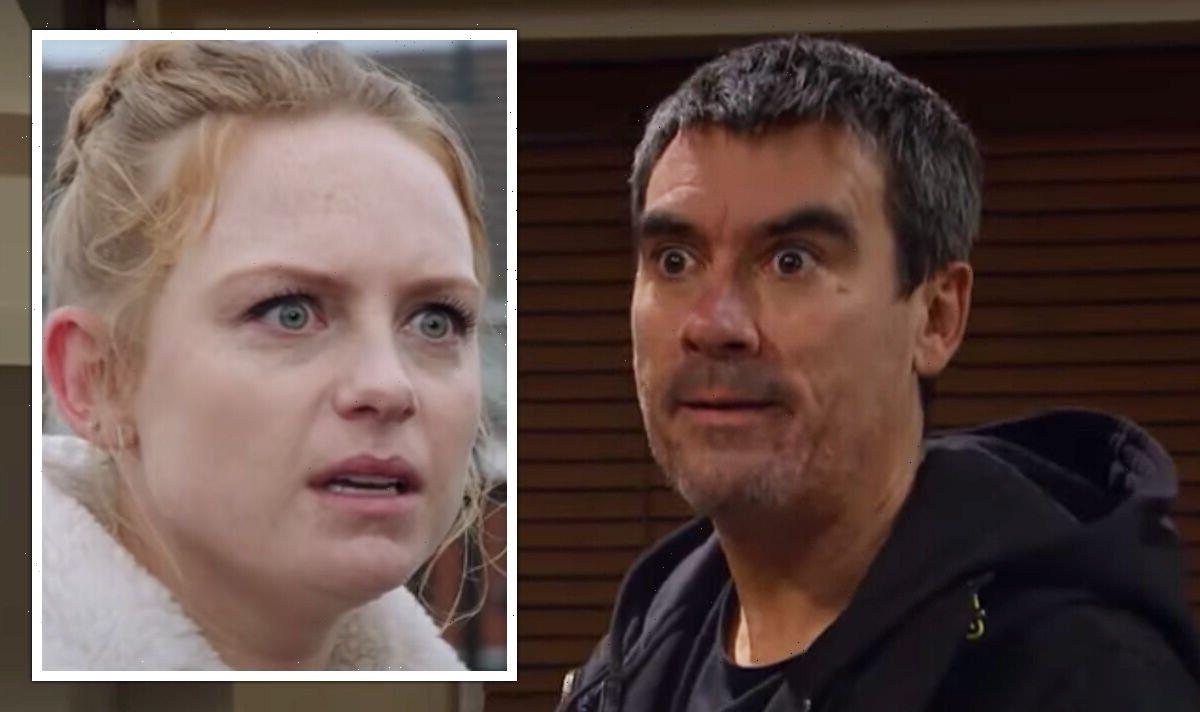 The Dingles gathered in the Woolpack to toast Kyle Winchester’s (played by Huey Quinn) being let out of jail ahead of his court hearing for the murder of Al Chapman (Michael Wildman). His father Cain Dingle (Jeff Hordley) was desperate to see Kyle, but the 10-year-old’s mother Amy Wyatt (Natalie Jamieson) stopped him from doing so. The Emmerdale hard man was left reeling, and fans “predict” he might expose Amy for her murderous past to get even.

During the latest episode of the serial drama, Cain was desperate to see Kyle, but Amy would not allow it.

Kyle was back in Emmerdale but a judge had ordered Cain to stay well away from him ahead of the youngster’s court hearing.

Cain was left raging and he nearly got into a physical altercation with Matty Barton (Ash Palmisciano) over the matter.

Cain’s anger intensified when he stopped by the Woolpack where he noticed the rest of his family celebrating his half-brother Caleb Milligan (Will Ash) for finding Kyle a solicitor.

As the Dingles noticed Cain at the bar, he said: “Well this looks cosy, doesn’t it?”

“Anyway, don’t let me interrupt your fun, you bunch of backstabbers.”

Mark Adam James fumed: “Fake Amy has a short memory of her own murderous past… #Emmerdale.”

Owen added: “Amy just killed Frank instead of going into a barn with a gun but the writers forgot that #Emmerdale.”

Bobby said: “#Emmerdale Amy is loving this level of power and enjoying lording it over Cain even though she killed Frank and covered it up. Classic hypocrisy.” (sic)

Emma Carroll shared: “Amy being self-righteous as per usual… You and your mum killed a man and have never faced the consequences, love #emmerdale.”

However, Jamal noted: “Cain needs to chill out. So Kyle isn’t living at home, at least he’s out. Before you couldn’t see him at all.

“You’re working in the garage, which is also opposite Amy’s home so you will still see him and talk to him. Don’t let Caleb feel like he’s won #emmerdale.” (sic)

Amy and Kerry Wyatt (Laura Norton) are both murderers, having killed Frank Clayton (Michael Praed) in 2019.

They started a fire at the local factory and when Frank realised his daughter was inside, he rushed in to save her.

But there was a massive explosion and he tragically died.

Frank was later blamed for starting the inferno and Amy helped point the finger at him by telling detectives she had seen him looking suspicious prior to the blaze.

Cain may have been holding onto Amy’s secret for these past few years, but will he report her to the police to get revenge on her?

Emmerdale airs on weeknights at 7.30pm on ITV.