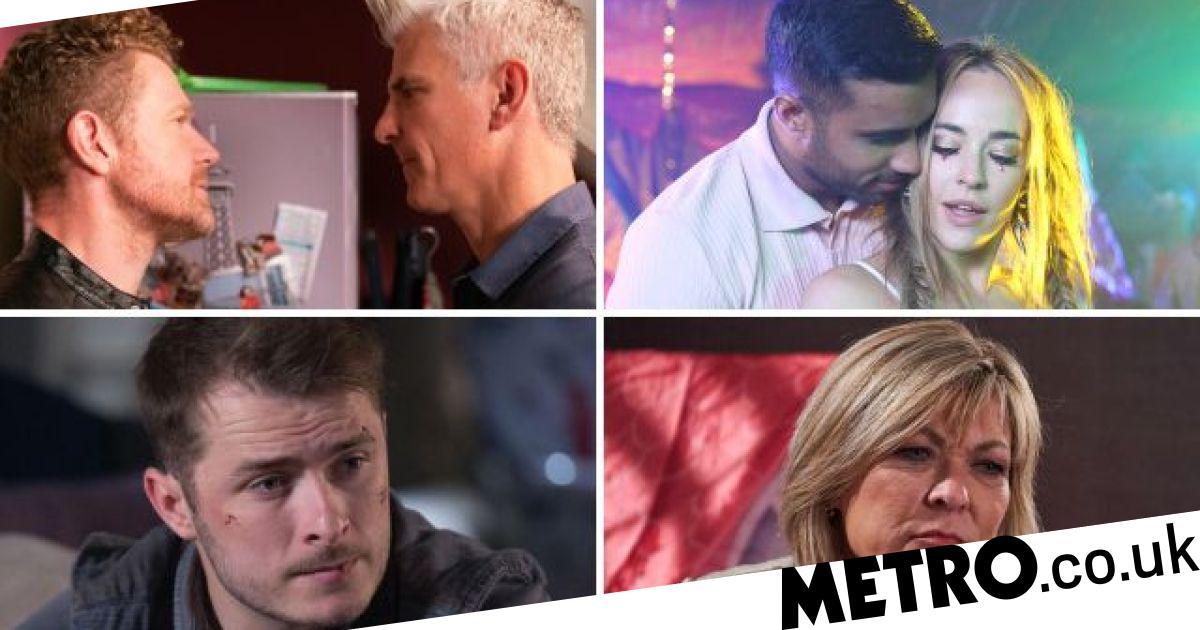 The soap police are working overtime in coming weeks as rapist Laurie Shelby (Kyle Prior) potentially escapes incarceration in Hollyoaks while the EastEnders investigators are trying to find out who attacked Phil Mitchell (Steve McFadden). Emmerdale cops have a fire to get to the bottom of but who does Kerry Wyatt (Laura Norton) pin the blame on? And over in Coronation Street, the force smashes a slavery ring – but is this the last that Seb Franklin (Harry Visinoni) and Eileen Grimshaw (Sue Cleaver) will hear of it?

In other major soap developments, there’s a nasty con, a dangerous theft, two risky business proposition, some tragic family news, a goodbye, some wedding fears, a new rivalry, a frightening collapse, a helping hand, a festival, a summer romance and a honey trap.

1. Mick is struggling with the stress of dealing with Ollie and his potential diagnosis and when Linda and Ruby end up in a fierce row over childcare, Mick takes the strain as he intervenes. Later, on the football pitch, there are frights all round as a breathless Mick suddenly collapses.

2. The police are swarming Albert Square looking for answers as the community reels from the violent attack against Phil. As those involved do all they can to cover their tracks, the police suddenly have their key suspect in their sights and prepare to make an arrest – but do they have the right person?

3. Callum is struggling to write meaningful vows for his wedding to Whitney and she is hurt. Mick, Mitch and Stuart all separately offer Callum advice but he can’t get his head around his task and is at a loss as his efforts prove fruitless.

4. Denise is less tha impressed as Sheree gets her feet under the table but she agrees to back down for Patrick’s sake. However, when Patrick has a solution for her staffing issue at the salon, Denise isn’t overly keen to be working with Sheree.

5. Iqra discovers that Bobby is exploring his faith and taking an interest in Islam and she offers to support him. But will he tell his family the path that he is looking into?

6. Ruby has a go at Honey and Billy about playing the music too loud but when she learns that it’s for Janet, she is mortified and apologises.

7. Habiba decides enough is enough and she sets a trap for Adam before making a decision.

8. Seb heads to the salon to confront Rachel about Alina’s situation but Nikolai attacks him and Jan is forced to leave him unconcious outside the hospital. Later, Eileen follows a lead and sees Jan working with Rachel and Nikolai and he comes clean about his true nature before the police swoop in and bust the trafficking ring.

9. Robert heads round to see Vicky and is horrifed to see her with Jed and her bags packed. As Jed and Robert square up to one another, he begs Vicky to say but what will she decide?

10. Imran discovers that the plans for the halfway house have fallen through and, knowing that Claudia is unaware, he offers her an unfair price for her flat. Toyah is uncomfortable when she finds out that he is trying to con a neighbour and eventually tells Claudia the truth.

11. When Gary stashes a wad of cash in a drawer, he later returns to find that Ryan has sold it and he goes in search of the money. However, he is incensed when he later discovers that Ryan took the money. Ryan insists that he didn’t know it was Gary’s but will he believe him?

12. Emma gets the bad news that her father has been diagnosed with stomach cancer and Maria comforts her as she reveals that her mum won’t even come back to see him.

13. Gary puts a proposition to Nick when he learns that the factory insurers aren’t paying out enough to cover the cost a rebuild but when Sarah learns that Nick is planning on working with Gary, she determines to block it. However, the staff lash out at her for putting her personal feelings first.

14. Mary catches Evelyn marking down goods in the shop to then buy for herself and threatens to report her to Dev – so Evelyn bars her.

15. In the wake of the fire, suspicions fall on Rishi and Manpreet as police wonder if there has been an insurance job committed. As the pressure mounts, Manpreet can’t cope and she prepares to leave the village – but can she be stopped?

16. Kerry and Amy are questioned over what happened at the factory and while Kerry finds a way to pin the blame on someone else, Amy is tempted to come clean about what happened to Nate. But as Kerry vows to ensure they stick together through this, can Amy cope with the pressure?

17. With the factory in ruins and Rishi under contract with Kim, Jai realises he has to take action and Kim has a proposition – but will he sell his soul to the devil and give Kim what she wants?

18. Debbie prepares to move to Scotland and she is surprised by how well Sarah is taking it. Meanwhile, Vanessa and Charity are given the opportunity to move into Debbie’s cottage – but there’s a catch.

19. Robert is keen to get the ball rolling on the surrogacy but he fears that recent events may have ruined their chances with the surrogate.

20. Nate is disappointed when he learns from Pete that Moira has gone away to Scotland.

21. As Laurie contacts Sinead ahead of his trial, Sinead refuses to engage with him and instead heads to the festival with Sami. On the way to court, Finn urges Laurie to accept his punishment but when he realises who he is, he attacks him and disaster strikes, leaving Sinead in danger.

22. At the festival, Sinead is determined to let her hair down while Cleo and Lisa take to the stage. Meanwhile, Juliet is doing her best to try and be pally with Brooke but when Brooke suffers a sensory overload in the crowds, she soon discovers that Juliet has been playing her.

23. Peri and Prince discover some passion for one another during a holiday romance but Tom does all he can to interfere with it. Later, Prince makes a big decision – but Goldie is far from happy.

24. Mitchell helps Scott when he accidentally glues his eye shut but he is soon behaving oddly around him. Later, when Mitchell jumps to the rescue again, is there an atmosphere brewing between them?

25. Ste prepares to go on another march as Jonny sets him up with Jed once again.