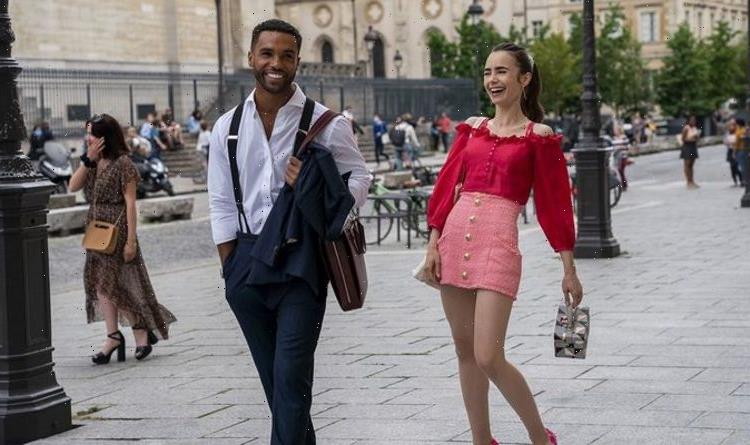 Emily in Paris is due to make its season two debut on Netflix on December 22. The escapist TV drama set in the heart of France will continue to see the titular character (played by Lily Collins) go through challenges with romances. New love interest Alfie is about to stir things up even more and Express.co.uk has all you need to know.

Who is Alfie in Emily in Paris?

Alfie is a fellow student taking French classes in Paris, and Emily is sent back to the beginners’ class.

Having been told she must brush up on her basic knowledge of the language if she is to succeed in her job, she is keen to give anything a try.

Emily’s eye falls on a good-looking suited and booted student, who introduces himself as Alfie.

The pair get off to a rocky start, but will they be able to get along?

Lucien Laviscount plays the new hunk, who seems to become friends with Emily this season.

In first-look photos, the pair can be seen walking casually along the streets of Paris together.

Emily is laughing, whilst Alfie is smiling widely with his suit jacket over his arm.

In another photo, he is seen kissing Emily on the cheek, so it seems the pair’s relationship will escalate quickly.

Lucien Laviscount is a 29-year-old British actor known for his role as Jake Briggs in Grange Hill in 2007.

He went on to become well-known as Ben Richardson in Coronation Street in 2009.

The star had a regular role as Jonah Kirby in Waterloo Road, before joining the cast of Celebrity Big Brother in 2011.

The actor spoke to L’OFFICIEL USA about his latest recurring role in Emily in Paris.

Opening up about how he felt about his role, he said: “I was flabbergasted, in all fairness, it all happened so fast for me.

“My manager called me and said, ‘Darren Star would love to see you for Emily In Paris’.

“In less than an hour, I learned that I had a Zoom the next day. Everything was getting real…Our call was supposed to last 15 minutes…And we must have talked for over an hour in the end!

“Whether it’s the show, our lives…And an hour after hanging up, I was told, ‘You’re going to Paris’.

“So everything happened very, very quickly, and I still haven’t come down from my cloud since this announcement. It still applies today!”

The actor is on Instagram and he shared some snaps of what fans can expect from season two.

One viewer responded: “If you’re in it, it will be so much more amazing than the first series.”

When he first shared the news, the actor said: “Let the adventure begin”, and he hopes his story will continue into a third season.

Another fan responded: “Another hottie joining our favourite show.”

Alfie will have to contend with love interest Gabriel (Lucas Bravo), who had an ‘affair’ with Emily at the end of season one.

The pair undoubtedly still have feelings for one another, but will Alfie be enough to keep Emily away from Gabriel?

Emily in Paris season 2 airs on Netflix on December 22.