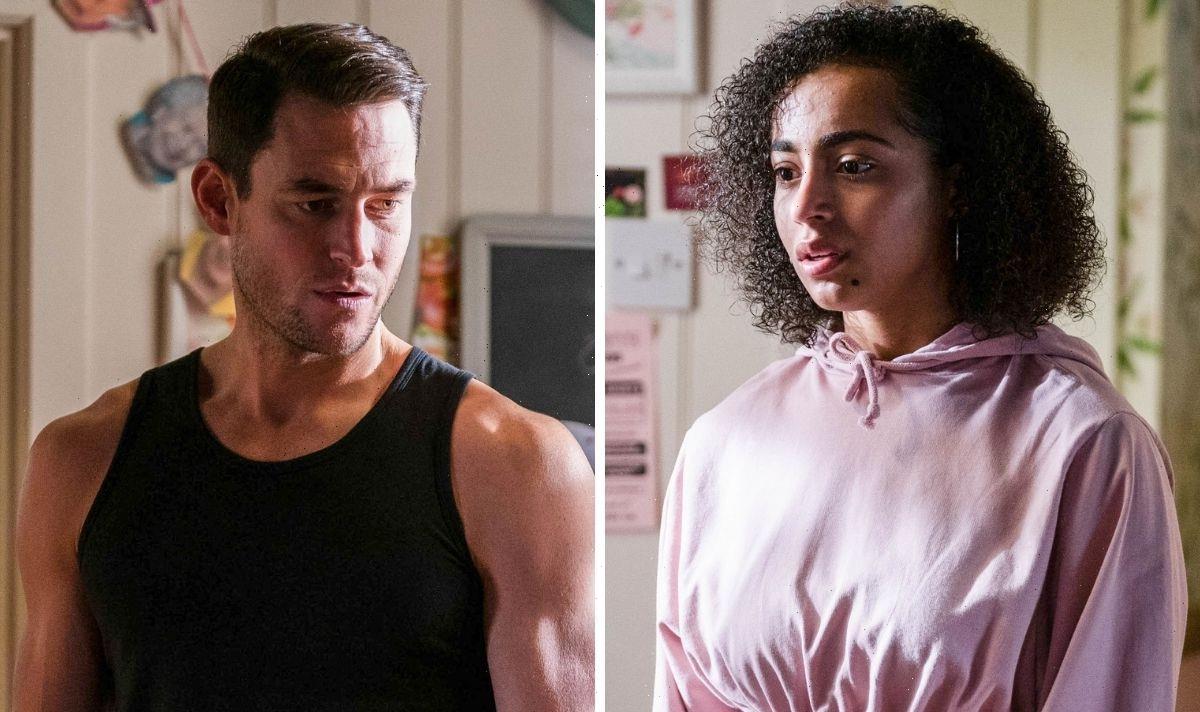 EastEnders: Stuart tells Rainie he will get the surgery

Zack (played by James Farrar) has always been protective of Jada Lennox (Kelsey Calladine-Smith) and even convinced Sharon Watts (Letitia Dean) to take her in when she had nowhere to go. The EastEnders favourite will soon see Jada’s manipulative side though when she tries to kiss him and is rejected. When the teenager lies and tells Sharon Zack is the one who tried to kiss her, could her lies spiral out of control and lead to Zack’s arrest on the BBC soap?

Official EastEnders spoilers confirm that Zack and Nancy (Maddy Hill) will continue to plan for their restaurant.

While making decisions, Nancys leads on decor and asks Zack to pick up the keys later.

However, a miserable Jada is upset after losing her job, and Zack tries to cheer her up.

They soon begin to bond over their similar childhoods and Jada begins to feel better.

After Zack returns from taking Jada on a trip to London to visit the famous sights, Nancy is furious to learn he didn’t pick up the keys.

Jada is less than impressed by Nancy’s attitude towards her boyfriend and tries to comfort Zack.

However, she gets the wrong end of the stick and leans in for a kiss.

Zack is mortified but plays it down, not wanting to embarrass her.

Later, Jada is surprised when Sharon returns home and, feeling hurt by Zack’s rejection, tells Sharon he kissed her.

A furious Sharon kicks her confused brother from the house Nancy shares some harsh words and questions his involvement in the business.

After making the dangerous claim, Jada might realise the impact of her decision.

With Zack out of the house and potentially kicked out of the business, his life could be destroyed.

However, feeling humiliated by her mistake and already deep in the lie, it’s possible she might take things even further.

Sharon will likely want to know exactly what happened, which may give Jada the chance to fabricate more lies about Zack being “inappropriate” towards her.

She might say his behaviour has made her uncomfortable for a while.

Their recent trip to see the sights may also be turned into something sinister if Jada lies about Zack’s intentions.

If Sharon is worried, she may well decide to get the police involved.

Despite Zack being her half-brother, she hasn’t known him for very long and may question what he is really capable of.

Once she is firmly involved in the lie, Jada will be scared to go back on her word to the police.

Will she report Zack even though he’s done nothing wrong?

If so, the popular character might be arrested on the grounds of sexual assault.

His arrest would definitely get tongues wagging in Walford, and his reputation could soon be in tatters.

It’s possible he will lose his job at the bar, and with Nancy kicking him out of her business plans, he may be left with nothing.

Jada hasn’t shown a manipulative side of herself yet, but lying to Sharon about Zack indicates she could be capable of more.

How far will the lie end up going? Will Jada come clean before things are taken too far?

Perhaps Zack will feel he needs to leave the Square and go on the run from the police if he can’t prove his innocence.

With Sharon used to having family around again, she will likely be devastated.

But how will she react once she learns Jada has made the whole thing up?

EastEnders continues on Wednesday at 7.30pm on BBC One.