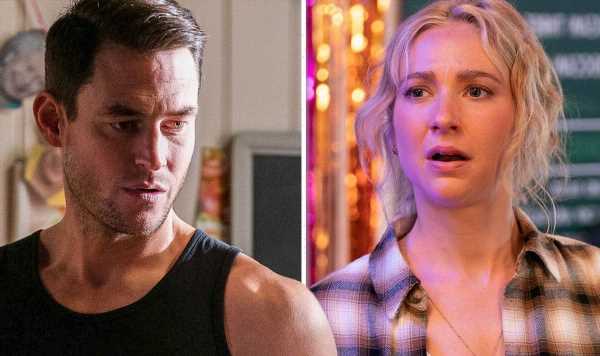 Nancy Carter (played by Maddy Hill) will be left devastated when she discovers Zack Hudson (Jame Farrar) and Sam Mitchell (Kim Medcaff) spent the night together. EastEnders spoilers confirm the chef will propose to his girlfriend in a bid to save their relationship but a new theory suggests an unplanned pregnancy could be behind the gesture.

In upcoming scenes, Zack struggles to cope with guilt following his night with Sam.

His horror at his own actions only increases when a courier delivers a gift from Nancy.

Once Sam leaves, Zack breaks down and tells Martin what happened.

After some soul-searching, he agrees the best thing to do is to be honest with his girlfriend.

However, when Nancy apologises for her recent behaviour and vows to put their relationship first, Zack changes his mind.

Meanwhile, Kathy Beale (Gillian Taylforth) tells the Carters she’d like to put up a plaque in The Albert in memory of Tina Carter (Luzia Bradshaw-White).

The grieving family are touched by the gesture and Zack suggests throwing a party in Tina’s honour.

Later, Sam tells Zack she plans on keeping their illicit night a secret.

However, at The Albert, Nancy discovers the truth about her boyfriend and the Mitchell sister.

Nancy is heartbroken while Mick and Shirley struggle to hide their anger.

Shirley punches Zack before Mick has the chance and the cheating chef is thrown out.

After everything the family have been through, Shirley can’t believe Nancy has been let down in the way that she has.

She storms over to find Sam and berates her in front of Kat Slater (Jessie Wallace) and Sharon Mitchell (Letitia Dean).

Meanwhile, Zack begs Nancy to give him another chance but she can’t bear to be around him and ends their relationship.

Sharon is infuriated with her brother and makes it clear she doesn’t condone his behaviour.

As the siblings clash, Mick turns up and gives Zack a piece of his mind.

However, the confrontation gets heated and Mick almost hits Zack when the chef crosses a line.

Martin tells his friend he should give Nancy some space but he doesn’t listen and instead rushes over to her.

She doesn’t want to talk but Zack decides it’s time he proved how much he wants to be with her.

The chef proposes leaving Nancy stunned but how will she respond?

EastEnders fans will have to wait to find out whether Nancy will agree to plan a future with her cheating boyfriend.

Zack is desperate to win his girlfriend back but there may be another reason for his declaration of commitment.

Could Nancy be pregnant with the cheating chef’s child?

EastEnders will remember Nancy’s decision not to have children is what destroyed her marriage.

If Zack discovers Nancy is pregnant he may propose as a way of proving he’ll stick by her no matter what.

EastEnders airs on BBC One from Monday to Thursday at 7.30pm.