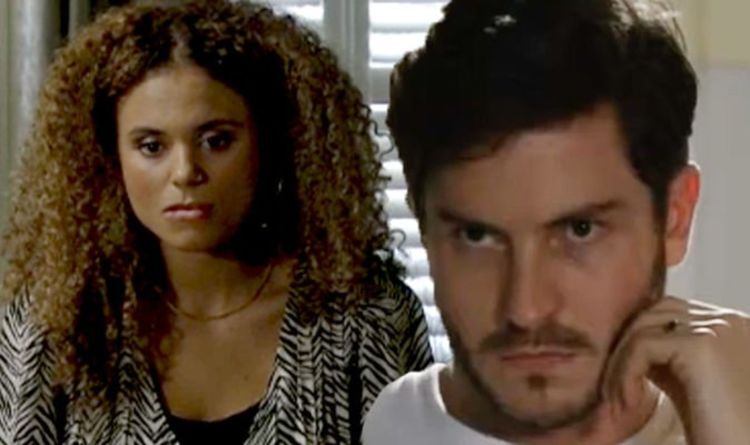 Chantelle (played by Jessica Plummer) discovered she was pregnant with Gray’s (Toby-Alexander Smith) baby during last week’s episodes of EastEnders. The news has seemingly made the hot shot lawyer change tact about abusing his wife but his dark ways are about to be unravelled on the BBC soap.

So far, Chantelle has remained quiet about the abuse, believing her husband when he tells her he will change his ways every time he hits her.

Things escalated last week when Gray told his wife to come home for a romantic meal he had prepared, only for the newcomer to lose track of time at a hairdressing competition.

It wasn’t long before the lawyer was subjecting his beloved to yet more abuse, with the expectant mother then taking a test which revealed she was with child.

Since discovering she is pregnant and telling her husband the news, upcoming scenes will see him tell his long-suffering wife he is seeking help from a therapist. 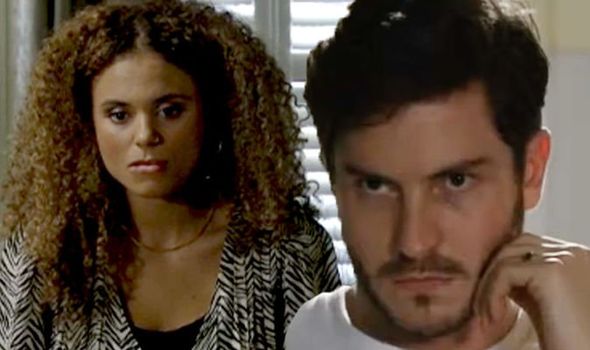 Gray is also becoming obsessive about his wife’s well-being, telling her to take time off from work and even issuing a warning to the couple’s other two children they need to be careful around their mother.

When the hairdresser cuts her hand next week, her husband soon rushes her to A&E to receive treatment for the wound.

However, his actions could be his downfall as when a nurse examines Chantelle at the hospital, they notice visible bruises on her body.

It’s yet to be seen how the expectant mother will explain her situation and whether she’ll admit to the harrowing ordeal she is enduring.

Could this be the moment Gray is exposed, or will his terrified wife lie about her circumstances to avoid her husband’s wrath?

Following the hospital visit however, Chantelle offers support to the father of her children as he heads for his first therapy session in later episodes.

The consequence of his decision to seek professional help will see the abuse once again promise not to hit his beloved again.

With the hospital sure to make a record about the bruises the expectant mother has, will someone closer to home soon realise what’s going on and expose the ordeal?

We’ve got some great stuff for Chantelle and Gray

Speaking to press, including Express.co.uk, at a recent press event for the BBC soap, Head of Continuing Drama Kate Oates teased what’s to come for the storyline.

“We’ve got some great stuff for Chantelle and Gray,” the soap boss began.

“That storyline will be continuing. It’s the EastEnders tradition of exploring stories which are really important issues and we’re going to be pushing that story.

“We’ve been building quite gently deliberately and building the public, by which I mean within the Square, the public perception of the kind of man Gray is and the kind of marriage they have.”

Some fans of the show believe tragedy is on the horizon as they predict Gray will break his promise to stop his abuse which could lead to a double death.

Taking to social media, one fan wrote: “I’m calling it now, Chantelle is gonna end up dead at the hands of Gray @bbceastenders So sad but so powerful.”

Another added: “Chantelle needs to leave the sadistic Gray or he will end up killing her.”

A third posted: “I think Chantelle is going to get rid of the baby, Gray will find out, lost it and kill her in a fit of rage #EastEnders.”

EastEnders continues tonight at 7.30pm on BBC One.

If you or anyone you know has been affected by Chantelle’s storyline, the BBC have a wide range of information and support regarding domestic abuse. See the full list of helplines and charities here.