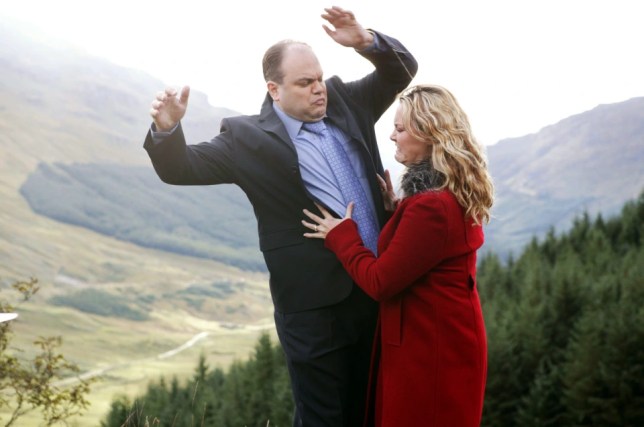 It’s a moment etched in the memories of us all, so poignant that there is an actual plaque to Barry Evans at the Scottish hill he died on, and EastEnders tonight revisited his murder at the hands of evil Janine Butcher (Charlie Brooks).

In the wake of Janine’s arrest, it became clear to the Albert Square community that she had played a part in the disappearance of Mick Carter (Danny Dyer), who is presumed dead, lost at sea.

Viewers saw Janine arrested for perjury, due to her framing Linda (Kellie Bright) for a car crash that she herself caused.

But the real crime in the eyes of fans is her driving her car over a cliff, prompting Mick to dive into the ocean to save her.

When he went back for Linda, he didn’t realise that she was already out and safe, and he was last seen struggling against a turning tide.

At the Vic, Shirley (Linda Henry) was drowning her sorrows, succumbing to the belief that her son is dead and blaming herself.

Also blaming herself is Janine’s abandoned daughter Scarlett, who knew that her mum had been up to no good.

As she overheard things about her mum, the name Barry Evans was cropping up all over the place, putting a fresh dagger in our hearts as we remembered our favourite bumbling Walfordian.

Shaun Williamson’s character was infamously murdered by Janine, who put on a masterclass performance of a grieving widow when she wailed that he should have worn slip on shoes, then he wouldn’t have tripped on his laces.

She’s never changed, has she? If only Mick had worn armbands!

Ricky (Sid Owen) comforted her and tried to distract her with chips and a film. It would work for us, to be fair, but Scarlett still wanted answers about Barry.

Please don’t YouTube it Scarlett, it will haunt you for life.

With Scarlett feeling the scars of her mum’s many crimes, she came to realise that Mick may still be around if it weren’t for her.

Will Janine’s evil taint Scarlett forever? And, if so, will a Barry of her own in the future get a ‘bottom of the cliff’ plaque?

Let’s hope Scarlett can break the mould – for everyone’s sake.