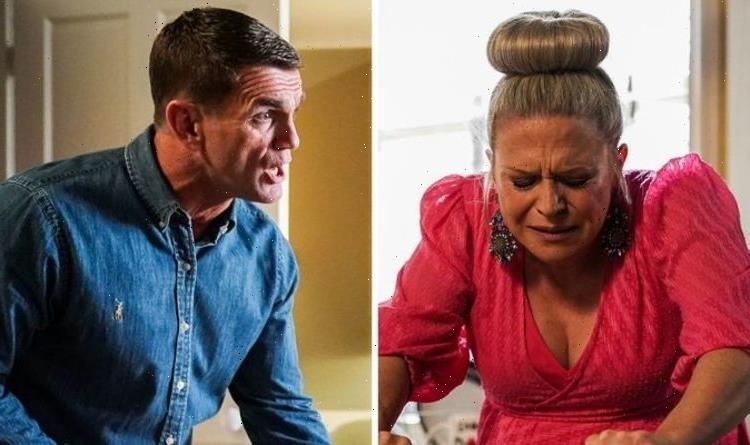 Linda Carter (Played by Kellie Bright) discovered she was pregnant earlier this year after embarking on an affair with Max Branning (Jake Wood). After being heartbroken over the fact the baby wasn’t his, Linda and her husband Mick Carter (Danny Dyer) decided to keep their baby’s truth a secret. However, their charade is starting to crumble as Max’s brother Jack Branning (Scott Maslen), and ex-wife Rainie Highway (Tanya Franks) are hot on their heels and starting to suspect the Carters aren’t telling the truth. Will the stress of Jack demanding answers and no one around to help result in troubling consequences for the baby and Linda?

In recent scenes, Jack’s suspicions concerning the paternity of Linda’s baby were aroused last month when he overheard the expectant mother telling a police officer that she was 36 weeks pregnant.

Quickly working out that she would have still been seeing Max at the time of conception, Jack was left with a flurry of questions.

Having sat on the information for a little while, in upcoming scenes, Jack bursts into The Queen Vic to confront Linda and Mick, not leaving without the answers he wants to hear.

However, when Jack arrives, Linda is experiencing contractions and denies Jacks allegations that Max is her baby’s father.

Will she be able to keep her secret as she prepares to give birth with the help of Jack?

Fans of the show took to Reddit to hypothesise what they thought was going to happen, with one user writing: “I really hope Linda doesn’t lose the baby due to lack of help and knowledge from Jack!”

Another agreed and commented: “Let’s hope Jack can put aside his feelings for one second and help Linda through the labour, it’d be heartbreaking if she lost it!”

A third user was supportive of Jack and said: “He knows the baby is Max’s so I’m sure he will do everything he can to help the baby be delivered as safely as possible!”

Linda embarked on an affair with Max after she was constantly being rejected by Mick, who was struggling to come to terms with his historic child abuse secret.

When Mick finally opened up to Linda, she chose to stay with her husband and sent Max on his way but didn’t tell him about the pregnancy.

Soon, Max ran off with his granddaughter Abi Branning Jr without telling any of the family, leaving her adoptive mother Rainie heartbroken.

In recent scenes, Rainie has been suspicious of Linda after overhearing grandmother-in-law Vi Highway (Gwen Taylor) mention she looks much bigger than she should for how far along she is.

Linda just laughed off the remark, but it left Rainie beginning to put two and two together and wanting answers.

Rainie went to see Linda for a cup of tea and spotted her hospital bag packed in the corner, with Linda out of the room, Rainie rooted through in the hope to find an answer.

With Rainie desperate to get Max back to the square with her daughter, Linda and Mick are in an increasingly dangerous position.

Elsewhere in Walford, Shirley Carter (Linda Henry) hit Phil Mitchell (Steve McFadden) over the head with a baseball bat, leaving him unconscious on the floor.

Janine Butcher (Charlie Brooks) came looking for daughter Scarlett Butcher (Tabitha Byron) to find her at the Mitchell/Moon residence with Tommy Moon (Sonny Kendall), refusing to leave with her.

Soon, the three find themselves locked in Tommy’s room, searching for the key that has dropped into the floorboards, unaware of the fire-starting downstairs.

Walford residents gather around the Mitchell house as a fire begins to engulf the residence, unaware if and how many people are inside.

With Mick busy helping at Phil’s, can Jack find him before Linda delivers her baby?

Or will Jack be forced to help Linda?

EastEnders boss Jon Sen recently spoke about the Carters not being able to keep their charade up for long.

He explained that Rainie, in particular, “is intent on finding the truth”, and with the baby’s arrival imminent, things are going to get even more complicated.