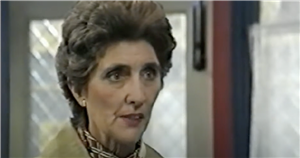 Eastenders actress June Brown was one of the show’s much loved stars after she played Dot Cotton for 35 years on the BBC soap.

The TV star died "peacefully" at her home on Sunday at the age of 95 on Sunday 3 April.

June first appeared on the BBC soap's set in July 1985, during the first year the show aired, appearing as Dorothy Cotton before she was lovingly nicknamed “Dot” later on by the cast and eventually viewers.

Introduced in the show as criminal Nick Cotton’s mum, Dot first arrived on Albert Square via the cafe dressed in her signature trench coat belted at the waist, with her handbag hanging daintily from her arm as she held onto a pair of gloves.

The character sported a brunette quiff — which went on to become Dot’s iconic favoured hairstyle of choice — and expressed her less-than-impressed glance viewers came to know all too well from her on the show.

Showing herself to be a Woman of God seconds into her first appearance, Dot quickly told off a swearing Arthur Fowler, who was also in the cafe. She said: “Language! That shalt not blaspheme”.

June, in her 60s at the time, appeared ever so put together in character as she discussed her stress in dealing with troublesome Nick to Arthur later as she sipped on a glass of water.

“I’ve seen Nick this morning that’s why I’ve got the head ache,” Dot said in the scene, highlighting the difficult nature of her relationship between her and her son at the time, which soap fans would grow to become familiar with.

In the same episode, June appears in character arriving late for her shift at the Laundrette, to an unimpressed Kathy Beale, whipping on her second signature outfit worn on the show – her light blue uniform – as she gets to work.

June played Dot during her first stint on the BBC soap up until 1993 and returned four years later before exiting for another break in 2000.

The 95 year old actress reappeared on EastEnders frequently throughout the next 20 years and became a much adored character on the soap among viewers, featuring in several major storylines before bowing out finally as Dot in January 2020.