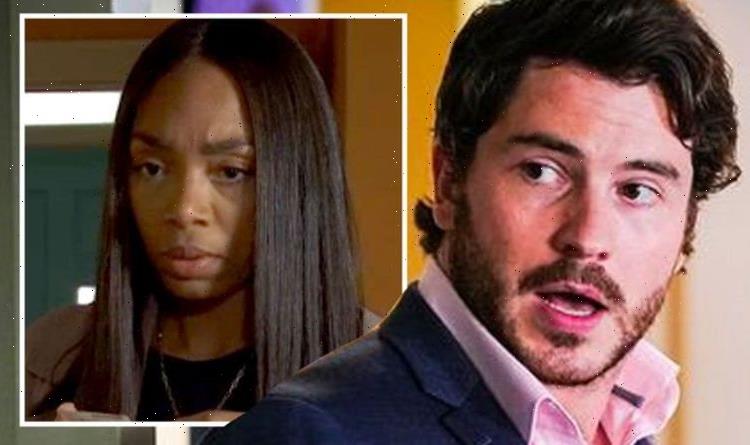 Gray (played by Toby Alexander Smith) has managed to pull the wool over most of the EastEnders resident’s eyes with his charm and good looks over the past two years. What they don’t realise is he is a serial killer who has taken the lives of three former characters of the BBC soap but in recent weeks, he seems to have calmed his anger after discovering Chelsea (Zaraah Abrahams) was pregnant with his child. The hotshot lawyer got down on one knee and asked the mother of his baby to marry him and with the festive season on the horizon, they plan to tie the knot on Christmas Day. However, Gray cannot afford a lavish affair or fund the future for his family having lost his job so will he decide to fake his own death to get his hands on some money?

The drama begins next week on the serial drama as Denise Fox (Diane Parish) asks her daughter’s suitor if he is marrying her for the right reasons.

Known for manipulating the most powerful characters on the show, Gray tells the mother of his bride he has only the best of intentions.

As the mother and daughter begin to plan their big day, they realise they have both booked to get married on Christmas Day.

They go head to head as Jack Branning’s (Scott Maslen) fiancée tells Chelsea she is rushing into things with the father of her baby and they should hold off tying the knot.

Wanting to prove Denise wrong, the expectant mother invites her mother and stepfather around for lunch at the Atkins’ residence.

However, what Chelsea doesn’t expect is for her husband-to-be to side with her mother as he tells her they should delay the wedding.

Earlier this year, the father of three lost his job as his vendetta against his boss reached an explosive conclusion.

Although he has managed to get himself a job at McKlunky’s fast food restaurant, he is not getting paid enough to afford a wedding and new accessories he and his wife would need for the future.

Though, Chelsea isn’t buying what her future husband has to say and believes her mother is behind his sudden decision.

Determined to get married on Christmas Day, the expectant mother assures her loved ones she will be sticking to the original plans.

[Gray] needs to be caught

As the villain prepares to pay out for a wedding he cannot afford, Chelsea later tells him they are going to need a new car.

With the baby bringing the family up to a total of five people, the expectant mother demands she has the very best.

Knowing he cannot buy a vehicle of any kind, Gray is given food for thought as he gets an idea which could solve all their problems.

Official soap spoilers have not revealed what this is but it could be he is going to fake his own death to get life insurance money.

He would let his wife to be in on the plan so she wouldn’t worry but he could tell her they need to leave Walford and begin a new life away from the Square.

Feeling her mother breathing down her neck at every turn, Chelsea could agree to go along with the scam but to make it seem realistic, the drama of Gray’s death could begin on Christmas Day.

When the villain fails to show at the alter, this could spark panic to his whereabouts and with no one able to locate him, the authorities could get involved.

Gray would have to be clever to ensure all his tracks were covered to make it seem as is he was gone for good and wouldn’t be coming back.

The police could find evidence to suggest the father of three will have died in an unfortunate accident, closing the case.

As the life insurance money enters Chelsea’s bank account, she could leave Walford with her baby and Gray’s other two children.

They would all begin a new life abroad, with Gray finally able to afford things again and getting away with a series of murders he committed on the Square.

After killing so many characters, including his late wife Chantelle Atkins (Jessica Plummer) his time on the show could also come to an end with a death, of sorts.

But as they pave a new life for themselves, Chelsea could discover her husband isn’t the man he says he is as she sees his anger in full force.

This could allow for the mother of one to return to the Square in the hope she can seek refuge with her mother but will anyone believe Gray is still alive?

Or will Chelsea’s reputation proceed her as her loved ones believe she is lying to them?

The actor who plays Gray, Toby-Alexander, has stated his character will get his comeuppance eventually during an interview on Loose Women.

He said: “I mean I’m asking the same question, he needs to be caught! No, his comeuppance is definitely on the cards, when that may be, I still don’t know.

“I’m sure he’ll be punished in true soap fashion,” he continued so if Chelsea returns to Walford with his baby, Gray could follow to get the child back.

However, this is when he could be caught out as one of his neighbours realises he isn’t dead at all.

The police will have more than a few questions to ask the father of three as he is charged with murder and fraud for faking his own death.

EastEnders continues Thursday at 7:35pm on BBC One.