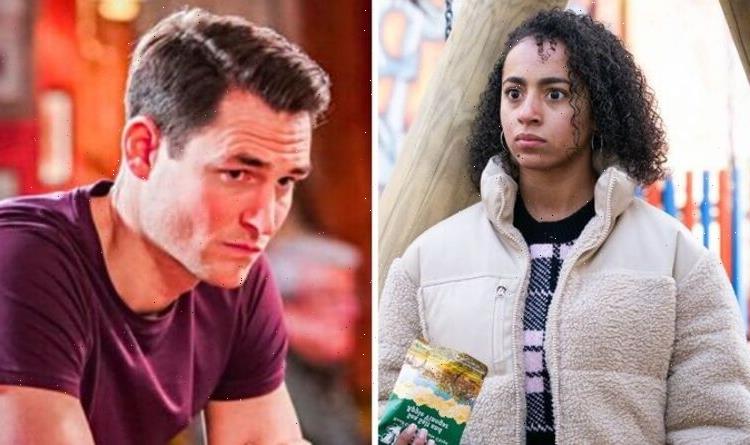 Sharon (played by Letitia Dean) kicked her formerly estranged brother Zack (James Farrar) out of her house last time she realised he had lied to her, and he promised not to do it again. The EastEnders siblings have since moved on, but in upcoming episodes of the BBC soap, Jada Lennox (Kelsey Calladine-Smith) will ask Zack to lie to Sharon for her again. If he does, could Sharon kick him out for good, resulting in his exit from Walford?

In recent scenes, Zack lied to Sharon about Jada’s whereabouts.

She had been trying to track down the mother of her grandchild after initially scaring her away by threatening to try to get custody, and Zack had been helping the young mother out.

“Jada needed some help, she has in it her to be a good mum,” he argued at the time.

“You and Phil weren’t playing fair, you’ve got to see that,” Zack pointed out.

Sharon wouldn’t forgive her brother easily though and kicked him out of the house.

“I know I went too far with Jada,” she admitted, adding: “I let grief cloud my judgement.

“But losing Denny, it ripped my heart out. Finding Alyssa gave a tiny bit of it back.

“It breaks my heart to think that little girl might be in trouble.”

She turned to Zack and commented: “I don’t think you’re family at all, you are Gavin, through and through.

“You do not betray family, I didn’t know you last year and I wish I still didn’t – now get out.”

Although the two have since sorted through their problems, Zack might be tempted to lie to his sister again to protect Jada.

Future episodes will see Sharon going away with her son Albie, which leads Jada to inform Zack about a planned party for the next day, but he tells her to cancel it.

Later, Will Mitchell (Freddie Phillips) enters the salon asking for an invite, and a confused Jada realises that her friends have arranged a massive event on her behalf at Sharon’s house, despite her cancelling it.

Trying to get an empty house, Jada urges Zack and Martin Fowler (James Bye) to go out on the day of the party.

To her relief, they agree. The men prepare for their night out but Zack is suspicious about Jada’s plans.

When the two leave, Jada’s friends, including Will, come round – clearly ready for a party.

The girls question why no one else has come.

Sonia Fowler (Natalie Cassidy) ends the party when she checks in and takes Will home.

Zack is disappointed with Jada, who pleads with him to keep quiet about the party and not tell Sharon, but he tells her he is going to.

Before Sharon arrives, Zack gives Jada an ultimatum – either she tells his sister or he will.

In the market, Will tries to encourage Martin to not tell Sharon about the party, but Martin has his doubts.

Later as Sharon arrives back, Jada plucks up the courage to tell her.

But noticing she was about to be honest about what she had done, could Zack stop her from revealing the truth?

It’s possible Martin and Will will convince him to have a change of heart.

Worrying that Sharon could kick Jada out if she learns the truth, he may cover up for her.

The real story is bound to come out soon though, and this time Sharon might want Zack out of her life for good.

Believing she can’t trust him, she could tell him to leave Walford.

Will the popular character make an exit from the soap?

EastEnders continues on Wednesday at 7.30pm on BBC One.