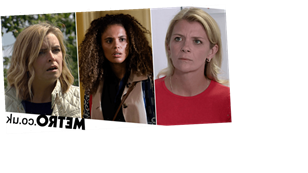 The beginning of a new week brings with it plenty of drama in the lands of EastEnders, Coronation Street, Emmerdale and Hollyoaks, and this week is a particularly big one for all four serial dramas.

Chantelle Atkins’ (Jessica Plummer) abuse at the hands of violent, controlling husband Gray (Toby-Alexander Smith) reaches a tragic end in EastEnders, as she’s killed by the abuser in an incredibly important story.

Meanwhile, Coronation Street and Emmerdale return to six exciting instalments a week, and big events ensue in both, as Leanne Tilsley (Jane Danson) learns that Oliver is only being kept alive by life support in Corrie, while Charity Dingle (Emma Atkins) discovers that Kirin Kotecha (Rish Shah) has returned to cause trouble in Emmerdale.

Chantelle is killed by Gray in EastEnders

Chantelle plans to escape via a family holiday with the Taylors, but her plan is foiled when Gray insists on keeping Mia and Mackenzie at home.

Having sensed that Chantelle is missing her kids, Mitch returns to Walford and picks them up. However, Gray ends up tagging along, and he later persuades Chantelle to return home with him. Mitch detects a flicker of fear in Chantelle’s face.

The couple return to Walford, and Chantelle finds the courage to tell Gray that she is leaving him once and for all, but she’s unaware that things are about to get a whole lot worse — and ultimately have tragic consequences for her.

Leanne is over the moon when Dr Howarth tells her that Oliver’s sedation can be reduced, but her happiness is short-lived when she later learns that his sedation had to be upped, and the machine is now the only thing keeping him alive.

Nick tells a thrilled Leanne about a hospital in Germany where they can treat people with Oliver’s condition.

But their hope is short-lived when the consultant breaks the news to Steve and Leanne that having obtained a second opinion, unfortunately it has only confirmed that Oliver will never be able to breathe unaided and the time has come to talk about switching off his life support.

Kirin returns and causes trouble for Charity in Emmerdale

Kirin approaches Priya and asks for money, and then to see Johnny. He’s horrified to learn Charity is intent on adopting Johnny, and then confronts her. He reveals that he’ll make it impossible for her to adopt Johnny if she doesn’t give him the large sum of money he’s after.

Charity does whatever she can to get a hold of the cash, but when she’s short a few bob, Kirin makes clear that he wants the full amount.

She later turns up to the meeting spot, once again with less money that she and Kirin agreed — and things turn nasty as a result. However, they’re taken aback when Tracy shows up — and the police aren’t far behind her!

One to watch: Monday September 14 at 7pm on ITV.

Juliet and Peri kiss in Hollyoaks

Jordan kisses Leela in the alleyway, and Juliet witnesses the whole thing! Given that Jordan is in a relationship with Peri, she’s horrified by such a betrayal.

Juliet wastes little time in confronting Jordan, but matters are complicated when he introduces her to his dangerous boss, Victor.

Juliet and Sid are subsequently tasked with selling twice as many drugs as before, and therefore they decide to target Imran Maalik’s party. Juliet is more focused on Peri — much to Sid’s dismay, as he’s concerned about meeting Victor’s demands. Peri goes outside for some fresh air, and she and Juliet share a kiss.

One to watch: Wednesday September 16 at 7pm on E4.

Tina and Frankie bond in EastEnders

Tina struggles to know if Frankie is flirting with her when she suggests a drink after work, but matters are complicated further when she puts her foot in it regarding something she said about Frankie’s deafness.

However, the two ultimately bond, and later Tina takes Frankie to the Vic, where she hits it off with Ollie.

Ray tells David that he and Shona are welcome to stay at his hotel for as long as they need and he’s happy to recommend a builder, but little does David know that the hotelier has ulterior motives.

Harriet makes a choice in Emmerdale

Harriet reveals that she’s quitting as vicar, but Dawn pleads with her to reconsider — reminding her that she needs to remain a woman of the cloth so that they can continue to hide Malone’s burial spot. Harriet tears off her dog collar, and is full of self-loathing — but will she listen to Dawn’s words?

One to watch: Monday September 14 at 7pm on ITV.

Diane makes a big decision about Tony in Hollyoaks

With Tony and Diane having separated in recent episodes, there has been tension aplenty. However, in spite of Tony refusing to come back home, Diane decides that she’s not ready to give up on her husband just yet, and Edward isn’t best pleased!

Ben and Callum’s happiness is short-lived in EastEnders

Ben informs Jay that he’s got a plan to set up Danny. As they prepare for Stuart’s stag do, Ben tells Callum about Danny, and — afterwards — Callum wonders if the offer to move in is still on the table. Unfortunately, the couple’s happiness is short-lived.

Paul is upset by Billy’s suspicions in Coronation Street

When Billy reveals that a body was found in the canal and he suspects it might be that of Kel, Paul’s distraught and heads out leaving Billy worried.