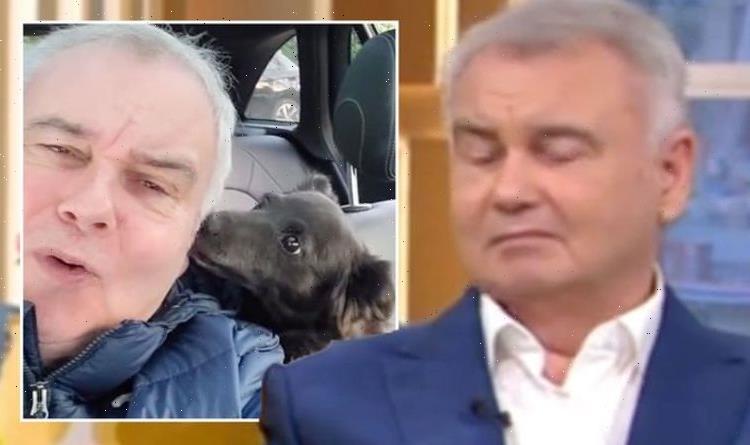 This Morning: Eamonn says he misses holding dog after back surgery

Over the past few months, This Morning host Eamonn Holmes has been regularly updating ITV viewers and his social media followers with his ongoing battle with chronic back pain. Earlier this year, the presenter was diagnosed with chronic pain due to a dislocated pelvis which resulted in his back being thrown out of alignment. Luckily, Eamonn has been seeing a physio and doing what he can to try and remedy the issue. But speaking to Ruth Langsford on Thursday morning, he revealed the one thing his health woes have stopped him from being able to do.

Thursday’s This Morning featured a number of interviews and segments about pets as Eamonn and Ruth spoke to several guests who put their cats above all else.

Keen to hear from viewers about their pet obsessions too, the pair appealed to fans for their input via the show’s email and social media channels.

However, Eamonn took a moment to reflect on his own pet woes as a result of the chronic back pain he’s been struggling with over the past few months.

At one point during the ITV show, he turned to Ruth: “Do you know what I miss?”

And intrigued Ruth looked back at her spouse as he continued: “Because I can’t bend down at the moment with my back,

“Not being able to hug the dog,” Eamonn added he looked deflated.

Feeling sympathetic to her other half, Ruth weighed in while mimicking a pawing motion: “Yeah, she does this to you.”

A disappointed Eamonn concurred, as he added: “She looks up to me and…”

As sadness descended onto Eamonn’s face, Ruth said: “I have to lift her up and hand her to you now.”

“Hmmm,” Eamonn added the two carried on with the show and left the discussion about pets behind them.

Eamonn’s heartbreak is down to the fact he’s been suffering from chronic pain, something he first informed his fans about back in April.

Sharing a snap from a hospital waiting room, Eamonn penned to his Twitter followers on April 1: “At hospital… pain like I’ve never experienced in my life. Need to find out what’s causing this. Wish me well. [prayer emoji].”

DON’T MISS:
Ben Miller opens up on feeling ‘ashamed’ of health battle
Naga Munchetty struggles to speak as she gets choked up by guest
Lorraine Kelly red-faced as she kills off Buzz Aldrin in space chat

At the time of recording, he told the panel show: “I actually had to come on here with a crutch.

“It’s pretty bad but honestly the thing about this, what I want to say to people, is you know, I’ve got steroid injections and everything and hopefully I’ll be on the mend.”

Ever since, Eamonn has continued to keep his fans in the loop in regards to his recovery.

His latest update came earlier this week when he took to Instagram to show himself relaxing after undergoing a physiotherapy session.

Soaking in the sun, Eamonn shared a snap of his legs as he captioned the post: “That’s my barefoot garden back/leg strengthening exercise routine done.

“This is a good stretch position for me to finish with. Nice Day. Hope it is with you too,” he added to his 737k followers.

Eamonn and Ruth will continue to host This Morning for the next few weeks during his recovery as Holly Willoughby and Phillip Schofield take time off from presenting duties.

This Morning airs weekdays at 10am on ITV.