A Place in the Sun: Guest tells Ben he ‘can do better’

Channel 4 viewers were transported to the sun-soaked location of Almeria, Spain on Wednesday as Ben Hillman helped guests Sue and Ali find their dream holiday home. With a £70,000 budget, the pair were keen for at least a two-bedroom property situated inland with plenty of outdoor space for their pet pooch, Leo. And while the A Place in the Sun host had a number of options lined up for the two, it’s safe to say they weren’t impressed – and didn’t hold back in letting him know.

Right from the get-go in property number one, it was clear Ben would have a challenge on his hands as Sue and Ali didn’t mince their words about their disdain for the property.

A two-bed house in Pechina listed for £73,000, Ali right away blasted the decor of the property and by the time the search had ended, neither of them had been won round.

Sadly for Ben, this trend continued as they approached the second property on his list.

The A Place in the Sun expert had lined up a two-bedroom house in Gador, surrounded by just under an acre of land complete with fruit trees. 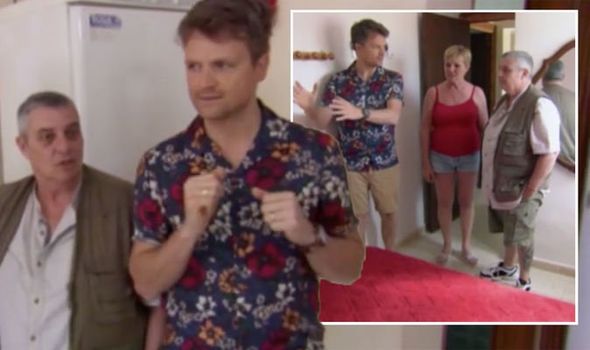 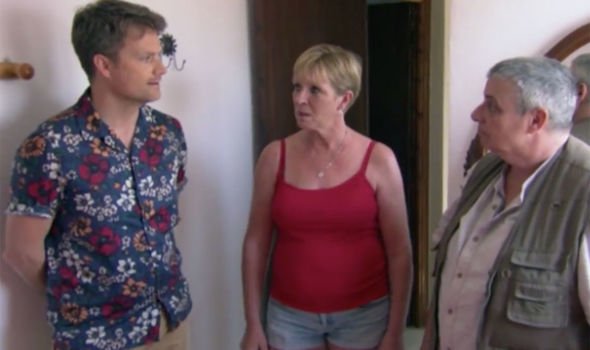 And while it received a better reception from Sue, Ali remained rather reserved about his feelings for the property.

Ali didn’t replicate his other half’s enthusiasm as he pointed out he’d need to change the kitchen and was unimpressed with the bathroom being situated outdoors.

As they entered the bedrooms, however, it was clear Ben’s frustrations began to grow along with Ali’s list of complaints.

“One of the bedrooms, the other is actually twice the length of this but the reason I’m showing you this is because behind that wall is the bathroom,” Ben explained. 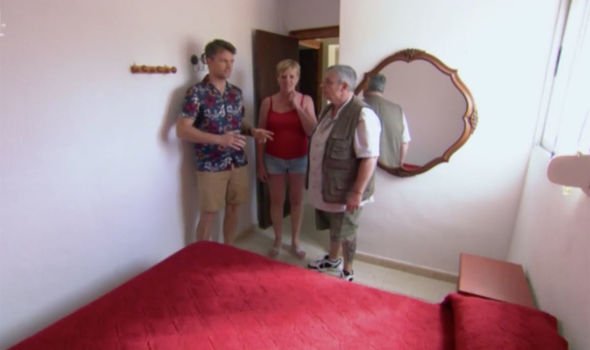 “You might wanna punch through to have an ensuite and access to a shower room indoors,” he added.

“Would be a lot better,” Ali said but it was clear he still wasn’t warming to the property despite Ben’s ideas for an ensuite.

“It’s not a bad place, is it?” Sue added, which prompted an irked Ben to reply: “Not a bad place? I’m not getting it…”

“It’s getting better,’ Sue insisted before Ben asked: “Does that mean I could do better?”

DON’T MISS:
A Place In The Sun’s Lee Juggurnauth rejected from show two years ago
A Place in the Sun’s Danni admits show ‘puts stress on relationships’
A Place in the Sun: Laura Hamilton bewildered by guest’s offer

Quick as a flash, Ali answered “yes” and Ben finally appeared to snap at the couple’s demands.

“Flipping heck,” an exasperated Ben said. “You don’t as for much, do you? Come on, let’s go outside.”

Sue and Ali laughed off the outburst but they still were not coming round to the second property and ruled it out.

Properties three and four fared no better either, leaving everything hanging on Ben’s fifth and final property.

But he had finally pulled a contender out of the bag with property number five, a three-bed house in Canjayar.

After showing them property number five, Ben even admitted the search had been “tough” thanks to Ali and Sue’s “straight-talking” demeanour”.

This was rejected, as was their second offer of £64,000, and Ben informed viewers Sue and Ali were still looking for their dream home after the cameras stopped rolling.

A Place in the Sun continues weekdays at 4pm on Channel 4.