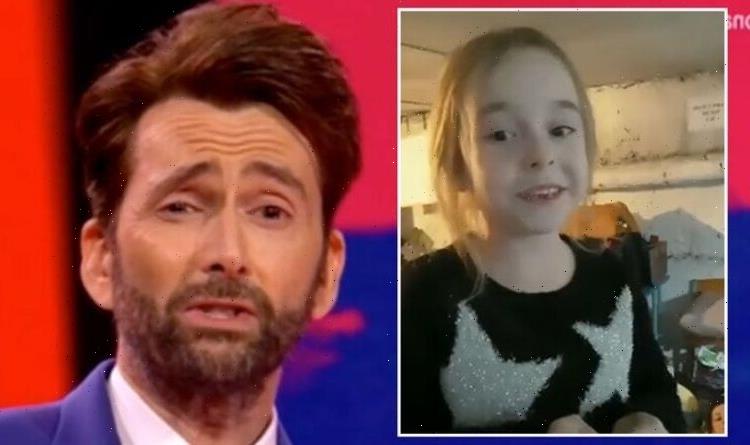 Guest hosts of Red Nose Day 2022, Sir Lenny Henry, Paddy McGuinness, Alesha Dixon and David Tennant presented a full night’s worth of comedy and entertainment with huge stars. The charity telethon aimed to raise money for the most vulnerable across the UK and beyond (including Ukraine relief). During the live programme, the former Doctor Who star broke down when a video of a Ukrainian child singing Let It Go from the movie Frozen was aired.

Addressing viewers at home, David began: “I think it hit me because I feel so helpless.”

His voice began to crack when he drew comparisons between the Ukrainian girl and his own children, who also like to sing from Disney’s Frozen.

He confessed: “Because there’s a wee girl in a basement singing the same song that my kids all grew up singing, you’re probably did too.

“And she’s in this awful, unimaginable situation, it’s so scary and it’s so wrong,” he asked: “What the hell can I do about it?”

With tears in his eyes, David remarked: “But then I remembered that I’m presenting on Red Nose Day, and that is what Red Nose Day is all about.

“Cause we ask for money, we also do lots of comedy.

“Because everyone like that little girl, everyone, everywhere deserves to sing and be happy, have some joy and to be safe,” the Staged star added.

Empathising with the cause, he pleaded: “I’m an actor off the telly, so I’m just as helpless as you and right now, you may be feeling a bit shorter of cash than ever.”

He said: “But once a year, we do this thing together that reaches out across borders, reaches out to strangers.

“Suddenly, there’s safety and support for children and women in Ukraine who’ve just left their homes, with their husbands and their fathers with no plans and your cash will miraculously be waiting for them at their unknown destination.”

“Let this be the moment you decide to pick up the phone.”

Later on in the Red Nose charity special, it was revealed the three-plus-hour live appeal had managed to raise £42,790,147.

Strictly Come Dancing fans were treated to a one-off reunion for 2021 winners Rose Ayling-Ellis and Giovanni Pernice as they performed a beautiful version of their waltz from the semi-finals.

Comedians French and Saunders were also reunited along with Little Britain’s David Walliams and Matt Lucas, who performed a few of their old Profile sketches.

Speaking of music, there were live performances from Lola Young and the cast of the West End’s groundbreaking musical & Juliet.

Unfortunately for BBC Radio Two DJ Zoe Ball, after being due to present, the host contracted COVID-19 and was forced to pull out at the last minute.

Red Nose Day 2022 is available to stream on BBCiPlayer