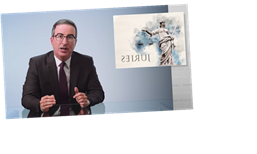 During the most recent episode of Last Week Tonight with John Oliver unpacked the racial disparities that come with the jury selection process in Connecticut and at one point, dragged the city of Danbury saying “If you’re going to forget a town in Connecticut, why not forget Danbury? Because, and this is true, f*** Danbury!” It didn’t take long for Danbury’s Mayor Mark Boughton to retaliate on Facebook.

“John Oliver, don’t mess with Danbury,” Bougton wrote in the caption to a video on Facebook. At first, he thanked Oliver for all the positive things he said about the town. This includes being ranked the second best city to live in by USA Today in 2015 as well as their railway museum and its Hearthstone Castle. He then brought us to the town’s sewage plant and said, “We are going to rename it the John Oliver Memorial Sewer Plant…Why? Because it’s full of crap just like you, John.”

During last week’s episode Oliver also said that Danbury was once the center of the American hat industry and then said, “If you’re from there you have a standing invite to come get a thrashing from John Oliver — children included — f*** you.”

In 2017, Boughton was part of another story on Last Week Tonight when Oliver poked fun at the lengths mayors were going to in order to get Amazon to build facilities in their cities. Boughton did a call back to that in his Facebook video saying, “Oh by the way, thanks for showing that Amazon video. We did get Amazon here in Danbury.”

Watch Boughton’s Facebook video below and the Last Week Tonight segment above.