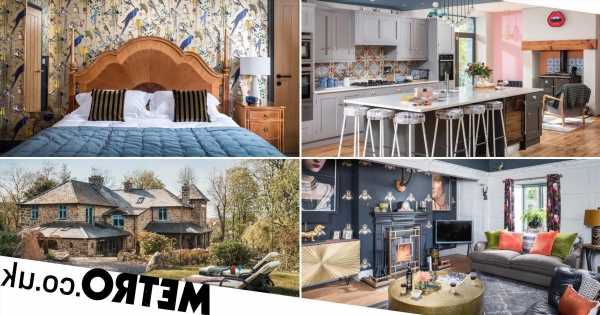 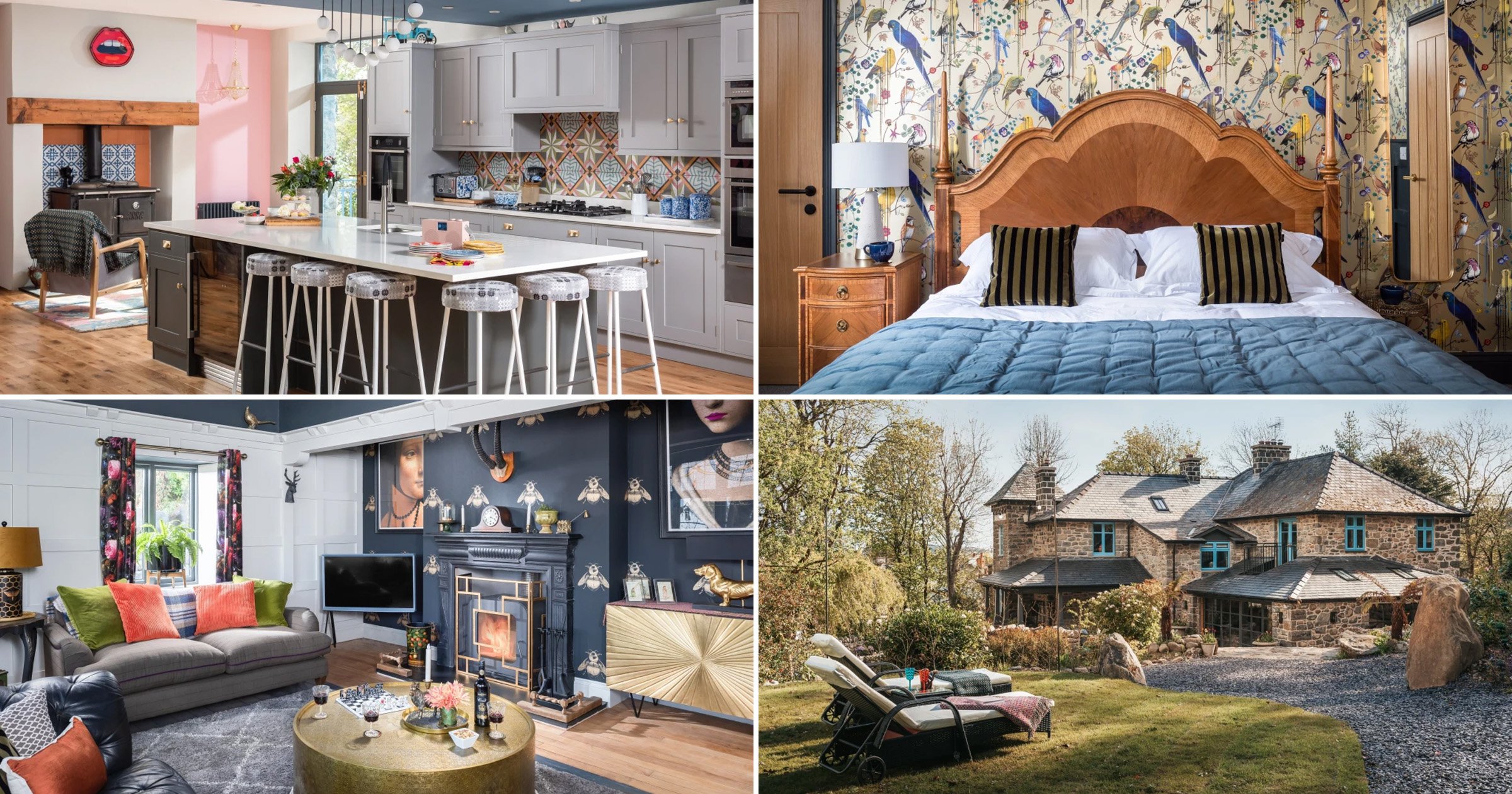 Hidden away in the hills of Snowdonia, encircled by a trickling stream and accessible only via an ornate private bridge, is something quite magical.

Once a fulling mill, used to cleanse sheep wool, Pandy House is a unique four-bed property jutting from the Welsh ground like the stone that it is hewn from. Only the windows give you a hint of what is inside.

‘A lot of people asked when we would take the plastic covers off our PVC windows – they didn’t realise it was finished,’ laughs owner Rebecca Murphy-Peers.

‘The Welsh stone is a beautiful material but it can be quite oppressive in large quantities so we thought we would use a vivid blue to give it a nautical feel and a pop. In Portmeirion [an hour away] they use a lot of blues and turquoises and they go side by side with the natural colours, so we thought: go for it.’

Open the front door and you realise that this is this kind of open-minded thinking that makes Pandy House so wonderful.

The property is as playful as one of Rebecca’s dogs – Bertie the basset hound and Dotty the springador – and no style is fastened down, leaving opposing colours and eras free to intermingle, mesh and make friends.

An antique cocktail trolley from eBay jostles for attention with an antique Chesterfield, a BHS cut-price chandelier and a neon green sheep.

It wasn’t always like this. Rebecca and husband Michael live in a small cottage nearby – originally purchased as a holiday home to escape work in Manchester but it soon became home with a daily commute to the Lancashire city – and they were intrigued by the dark and mysterious house brooding across the bridge.

‘We had watched the property for years; it was an anonymous, dark building that sat on the river but had some real charm about it.

‘There used to be signs everywhere saying it was private property, with barbed wire, and it was always dark – the place was a mystery to everyone, no one could cross the bridge to get into the property.

‘We said if it ever came on market we would have a look.’

Then one day it came up for sale – and almost as quickly was sold. Then the sale fell through and Rebecca went to have a look at it. ‘We went on a Saturday at 11am and the estate agent offices closed at 12.30 – I was so worried it would sell again I put an offer in before they closed.’

The house inside was mostly white, very dated, with strange rooms and dusty furniture, and had loads of potential. Even though their plans for it were eclectic to say the very least, Rebecca and Michael have been sympathetic to its history. They have even fitted a modern twist on a mill water wheel on the outside, in Manchester United red.

‘The house was cold and quite naked but great because it’s amazing to find places like that with original features,’ Rebecca says. ‘We wanted to keep the skirting boards and fireplaces, we were looking at what we could keep as opposed to ripping things out. Your mind goes into overdrive.’

The first job was to get a feel for their new purchase.

‘It took a while just to walk around. We stayed there at different times, we watched when the sun came up, where would people want to sit and have breakfast, and dinner, where would flowers grow – it was a lot to learn about the place.’

The kitchen area was extended and now houses a huge open-plan dining area, complete with bespoke table from a local sustainable carpenter, a second-hand kitchen from Used Kitchen Exchange – ‘the extension was planned around the kitchen,’ laughs Rebecca – and a pair of neon Seletti lips on the wall.

There is a cool nook round the back for watching TV but arguably the coolest element, or at least one of them, is the little pink wall, not dissimilar to Nancy’s Blushes by Farrow & Ball, with a BHS chandelier hanging down. It’s like a photograph of a different house, but real.

‘I have a pallet of colours I wanted to use – that wall came from the Ca’ Pietra tiles in the kitchen. People say they could spend hours just looking at the details,’ says Rebecca.

‘Even when I had my first flat at 17, I had a crazy carpet with paint brush marks on it and 1960s and 1970s glasswear from car boots – I always had a mixed up, eclectic interior design style. I don’t like things boring.’

Across the corridor in the front room, the interior design rulebook is not so much torn up but turned into papier-mâché Art Deco light fitting and painted gold and terracotta.

Bees follow you everywhere in this house and in this room are resplendent in Timorous Beasties wallpaper, matching a gold cabinet from Swoon and lush brass table that was collected along the way.

The black vintage Tetrad Oskar black buffalo leather sofa – very popular in the 1980s – is from eBay. It is the kind of wild interior style that wouldn’t work without confidence – a flash of floral and a gold dog alone would look too kitsch – but as a single-minded passion it forces you to love it.

‘I use my instinct,’ says Rebecca. ‘If I like a particular kind of wallpaper and particular type of light I put them together. It doesn’t matter if they wouldn’t work, I put something with them that will draw them together, a connector. In the front room we have a bee theme going on, but the pieces are not very similar, so I put a floral curtain in there and bees and floral are connected so it brought everything together.’

Each of the four bedrooms has a different theme, a different world – ranging from India to a nautical children’s room, complete with real portholes and bulkhead lights reclaimed from a ship.

Outside is a wood-fired hot tub that is shrouded by a pink wall, the corner of which can be glimpsed from the road. Not only do Rebecca and her family use the house as a place to meet at Christmas and get cosy but she also rents it out, which helps to pay for such a detailed project.

Sharing it with family, friends and even strangers gives her an enormous sense of satisfaction, she says.

‘It’s nice for people to appreciate it. It’s my style and I didn’t decorate it with anyone’s taste and appreciation in mind and I’m pleased that it appeals to other people. It’s nice there is something tangible that we have achieved through lockdown that we can look at and love.’