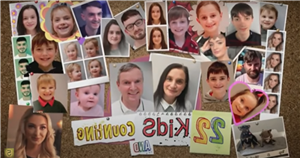 Missing the Duggar family? Counting On might be canceled, but there are still plenty of other shows on TV featuring large families, including Welcome to Plathville and Doubling Down With the Derrricos. And then there are Radfords. This English family is even bigger than the Duggars, and while they don’t have their own reality show in the U.S., they’ve received plenty of media attention across the pond.

Michelle and Jim Bob Duggar have 19 kids. The oldest, Josh Duggar, is 33, and the youngest, Josie Duggar, is 11. But their family isn’t as large as the Radfords. U.K. couple Sue and Noel Radford have 22 kids. Their oldest is 32 and their youngest is just a year old.

The Radfords are the largest family in the U.K., according to ITV. Sue gave birth to her and Noel’s oldest child, Christopher, when she was just 14. Twenty-one more babies followed, including the couple’s stillborn son Alfie in 2014. Noel and Sue also have six grandchildren.

The Radford family has also appeared on reality TV

Like the Duggars, the Radfords have also appeared on reality TV. The family has been the focus of a number of specials and series in the U.K., including the most recent 22 Kids and Counting, which aired earlier in 2021.

Full episodes of the Radford family’s TV show aren’t available in the U.S., but you can watch clips on YouTube. In one, the family explains that they’ve spent about £1 million raising their kids so far and that Sue, 46, has been pregnant for 16½ years of her life.

The Radfords do some things differently than the Duggar family

Both the Duggars and the Radfords have a lot of kids. But when it comes to raising their children, the Radfords do some things quite a bit differently than their counterparts in the U.S.

While Michelle and Jim Bob opted to homeschool all of their kids, Sue and Noel send their children to school. Several of their older kids have even attended college, unlike the Duggars, who typically don’t pursue higher education.

The Radfords, who aren’t openly religious, also don’t force their kids to follow the same strict rules that the Duggars do. There are no requirements for the girls to dress modestly and or for the kids to have a chaperone while dating (or “courting,” in Duggar-speak). And while the Duggars tend to have modest birthday celebrations — some have even characterized them as “bleak” — the Radfords are a bit more generous, spending around £100 on presents for each kid, according to LancLive.

The Radfords have this in common with the ‘Counting On’ family

But the Duggars and the Radfords do have some things in common. The Duggar family has a number of businesses, mostly real-estate related, which helps them fund their lifestyle and provides jobs for the younger Duggars. The Radfords are also business owners. They have a pie shop, Radford’s Pie Company, and several of the children are involved in the business.

Both families also rely on similar tricks for stretching a dollar. The Duggars embrace shopping at thrift stores and buying in bulk to save money. Sue also likes to hunt for deals so she can feed her large family.

“We buy in bulk things like wash powder, toilet rolls and we shop about for things and see what’s on offer,” she told Closer. “It’s all about planning and being savvy.”