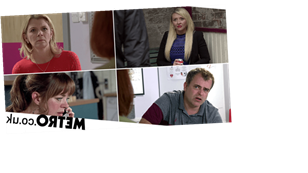 There’s tragedy in the air over in Coronation Street as Leanne Battersby (Jane Danson) and Steve McDonald (Simon Gregson) face the worst possible time with the news that they need to consider switching off Oliver’s life support.

But Leanne is determined not to give up – and is soon on a mission. Meanwhile, news of a death brings distress to Paul Foreman (Peter Ash) and soon he finds himself under suspicion from Billy Mayhew (Daniel Brocklebank)

The doctor announces that they will reduce Oliver’s sedation and Leanne is delighted – but Steve and Tracy are cautious.

Mary and Billy call at the police station to find out that if the body was Kel. Billy relays the news to Paul, who is left distressed.

David and Shona return and Ray tells David they can stay at their hotel as long as they need. David then gets bad news about the insurance – they won’t pay out.

Karen questions Toyah over the situation with Eva and Susie.

As Bernie is delighted that Kel is dead, Billy finds Paul drinking in Victoria Gardens and can see he is struggling.

After speaking to Aadi and taking advice from Nina, Asha sits down with Dev – but she is annoyed when he presents a spreadsheet detailing the costs of her and Corey living together.

The doctor breaks the news to Leanne and Steve that life support is the only thing keeping Oliver alive. Toyah and Imran get good news about fostering but it is overshadowed when they hear about Oliver. Leanne tells Nick, Steve and Tracy that she will never give up on her son.

David is pleased when Ray says he can stay at the hotel – but then he offers to ask a developer friend to buy the house from David.

Kevin sets off with Jack to the athletics event, leaving Abi and Debbie alone to bond. Sally tells Debbie that Abi is a good person and loves Kevin, unaware that Abi is on the phone to Peter telling him that she can only think about getting a fix.

Steve and Leanne are pleased that a specialisit will give a second opinion. Nick tells Leanne about a hospital in Germany which treats children with Oliver’s condition. But the second opinion confirms that Oliver will never be able to breathe unaided – and it’s time to talk about switching off life support.

A police officer calls round and confirms Kel’s death. Paul says that he isn’t surprised Kel was murdered but the police officer points out that he never says he was.

David tells Sally that he is responsible for the hole in the garden according to the insurance. Shona admits how much she enjoyed her night with David, Nina urges her to tell David.

George Shuttleworth apologises to Mary for being short with her but Emma can tell she has taken a shine to him.

Leanne accuses the consultant of giving up on Oliver and announces she is taking him to Germany. She and Steve Facetime the German doctor but Leanne plays down the severity of Oliver’s case – and she is delighted when the doctor says he will treat Oliver.

Abi tells Debbie that she stole some morphine and it reignited her addiction – Peter is only trying to help her.

David reveals he is selling the house and Sarah is gutted. Shona calls round and tells David how much she is ready to move back in with him, leaving him with a dilemma.

Billy asks Paul what makes him think Kel was murdered and he becomes defensive. Adam persuades Daniel to join him for an online pub quiz.

Abi tells Peter about her conversation with Debbie. Debbie suggests she takes Jack out to give Kevin and Abi for some time alone. Abi braces herself and tells Kevin the truth – how will he react?

Steve tells Tracy and Emma that they need £500k for Oliver’s treatment abroad. Emma vows to come up with some ideas but Tracy insists that Steve talks to Leanne about playing down Oliver’s symptoms. Leanne calls the doctor and gives a truthful account.

Craig calls at the flower shop flat and confirms that Kel’s death was accidental. Paul is angry that Billy thought he had murdered Kel.

Daniel bumps into Nicky. Kirk spots them and worries that Beth will be furious. Craig recognises Nicky but can’t place her. When Kirk comes over, Daniel steers Nick away but she insists she has a client to see.

Shona calls round and announces that she’s moving back in. David rips up the house sale contract. Emma is miffed when customers vote for her to do a sponsored silence over a sponsored dance.