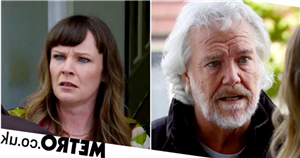 Stu Carpenter (Bill Fellows) is finally set to come face to face with his estranged daughter, Bridget, according to a new teaser video from Coronation Street.

Stu arrived on the street in October 2021, as a rough sleeper who had unintentionally become involved in Seb’s (Harry Visinoni) death after finding Corey’s (Maximus Evans) backpack.

Since then, he has managed to turn his life around. He is living with Yasmeen (Shelley King) and working at Speed Daal. However, there is one relationship that he still wishes to mend.

Despite sending her gifts over the years, Stu has had no contact with his daughter Bridget. However, it appears he has finally managed to track her down.

The teaser video reveals that Bridget is terrified to come face to face with her dad for the first time in 30 years, as she attempts to slam the door on him. However, determined to make amends, Stu begs for Bridget to let him be part of her life, claiming that he ‘didn’t hurt that girl’.

What does this mean?

Stu has dabbled in crime in the past, but is he a violent man?

And why does Bridget believe he did hurt the girl?

With Bill Fellows hinting at a big storyline for Stu this Autumn, are we set to discover more about Stu’s sinister past?

He told us: ‘It’s a massive year and I’m right in the middle of the storm and I think it continues for some while trying to get this sorted out because it’s so well written, they’re making it real. Things don’t happen overnight. Sometimes things in programs can happen too quickly but this one is just taking its time, loads of people get involved. It’s a good storyline because it covers all sorts of things and life generally.

‘A lot of people will relate to a lot of things and ask a lot of questions about our society. It’s very clever. I think it’s going to raise a lot of awareness about something – I can’t give the game away!’