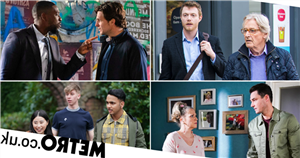 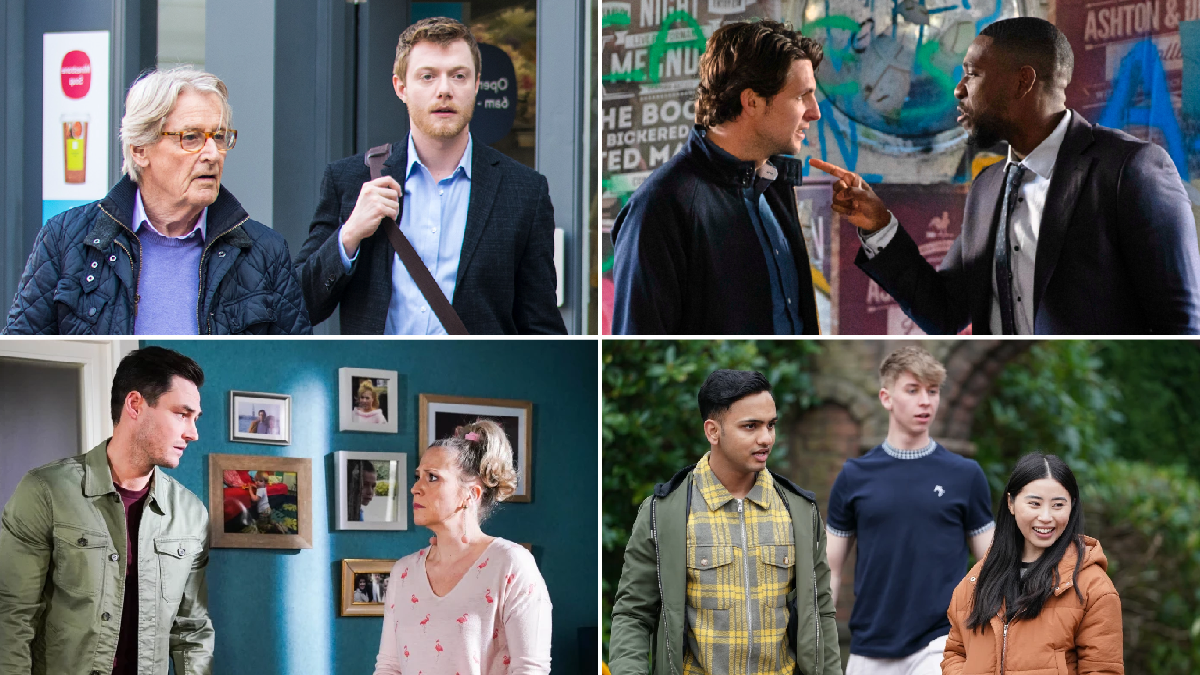 Many a soap mainstay has to make a big decision next week, with dramatic events ensuing as a result.

EastEnders’ Linda Carter is offered money by Janine Butcher to leave the Square immediately, but will she do so?

Imran Maalik, meanwhile, goes on a date with Serena Chen-Williams in Hollyoaks, but he decides to invite along his friends, which confuses matters for Serena.

Over in Coronation Street, Ken Barlow is accused of betraying Tracy Barlow after he’s spotted out with Daniel Osbourne, while Emmerdale’s Ethan Anderson is attacked by racist Jordan.

There’s a lot to unpack, that’s for sure, so make yourself a brew and enjoy a deep-dive into next week’s soapy shenanigans, courtesy of Metro.co.uk.

1. As Imran, Toyah, Kelly, Nick, Leanne and Adam gather for Alfie’s naming ceremony, Abi arrives! Abi grabs the opportunity to take some pictures of her son, and secretly meets up with Matty, an old contact. She hands him a couple of envelopes, orders him to work his magic. Toyah, meanwhile, lets Abi take Alfie for a walk, which horrifies Imran.

2. Tim buys some tickets for the charity raffle in memory of Oliver, and he wins a romantic night for two in her hotel. Sally packs for the evening, while Tim orders some erectile dysfunction tablets, ignoring the warning about heart conditions. At the hotel, Tim and Sally kiss passionately, but things soon take a turn when Tim’s heart starts to pound. He subsequently confesses to Sally that he’s taken an erectile dysfunction tablet, and collapses on the bed. Horrified, Sally calls an ambulance.

3. Daniel tells Mrs Crawshaw that he doesn’t think he’s cut out for teaching, and later, he reveals that he’s decided to quit. In the flat, Daniel tells Nicky about how he doesn’t deserve to be a teacher. When Nicky suggests they could have a future together, how will Daniel react?

4. Fiz meets up with Phill and his friends, Graham and Angela. Graham recognises Fiz from her trial and explains that he was the solicitor for the prosecution. Fiz confides in Tyrone how she’s never told Phill about her crazy ex-husband in case he ran a mile – what will Phill think?

5. Tracy and Amy are shocked to see Ken and Daniel sharing a laugh together. Tracy rails at Daniel and threatens to report him to Mrs Crawshaw. Tracy calls at the barber’s in a bid to recruit David on her mission to sabotage Daniel’s job, what will David decide?

6. Amy and Jacob worry about their broken boiler and where they’re going to get a shower. Mary realises she’s left Tracy’s order book at home so Jacob offers to pick it up for her. Eileen returns home and she’s shocked to find Jacob wearing only a towel having just had a shower. As Eileen screams and threatens to call the police, how will Jacob get out of this one?

7. Putting their differences aside for once, Eileen and Gail place flowers by the Arena memorial bench to pay their respects and mark the 5th anniversary of so many lives lost.

8. Mick reaches out to Martin and Zack, urging them to let Linda stay, promising them that he will see to it that she seeks professional help. Linda, meanwhile, accompanies Mick on a walk, but when she finds out he’s trying to make her go to a meeting, she’s livid. Soon enough, however, the former couple confide in one another about their struggles, and Linda admits that she needs help.

9. Linda is on cloud nine when Nancy invites her to a meeting at their new business. The landlady invites Mick along, but he declines, that is until he learns that Linda aced the meeting for Nancy, securing a reduced price for the space. Linda opens up to Mick, professing her love for him.

10. Janine’s paranoia spirals, and despite Sonia giving her a reality check, she decides to do whatever it takes to get Linda out of the picture, offering her £25,000 to leave Walford. Linda agrees, but wants double the money! Will she really leave the Square?

11. Callum is fuming with Ben over his latest actions, and thus he breaks up with him! Lewis intervenes, trying to make Callum see sense. Callum receives some advice from Frankie, and subsequently agrees to give Ben another chance.

12. Stuart has his first chemotherapy appointment and on his way home, he bumps into Dotty – who assumes he is high! She threatens to tell Bernie, but Stuart, feeling the pressure, admits that he doesn’t feel a connection with Roland.

13. Jean returns home, and Kat and Eve share their concerns with Stacey, who is determined to help her mum. Jean fails to interact with the children, while Stacey comes to realise the challenge that is ahead of her.

14. Frankie is on a mission to create her photography portfolio and Rocky suggests that she captures the real East End. She photographs Rocky posing by the car lot but is disappointed about how the pictures have come out. After photographing Mick in The Vic, Rocky and Mitch convince Jay to take part but after Frankie leaves, they set him up.

15. Jordan confronts Billy, making it clear that he is part of a gang. Charles, meanwhile, expresses his doubts about Ethan representing Jordan, and thus Ethan pulls out of the case, regardless of the consequences for his career. Jordan is livid, which leaves Ethan shaken. Outside the subway, Ethan arranges an evening with Marcus. Little does he know, however, that Jordan is following close behind. At the subway, Ethan is alarmed to be accosted by Jordan – his racist tirade is too much and he calls him out for what he is. Jordan responds by throwing him to the floor. Ethan is filled with dread over what this man is capable of.

16. Suzy suggests to Moira that she hire out her barns for weddings, but she inadvertently puts her foot in it when she asks Moira about using one field in particular, unaware that this is where Holly is buried. Leyla nods to a photo of Holly, and Suzy recognises her! Leyla’s confused when an unsettled Suzy bolts from Moira’s after repeatedly staring at Holly’s picture. Back at the cafe, Leyla finds Suzy browsing an online remembrance page for Holly causing Suzy to admit that she knew her.

17. Moira’s appalled when Cain wishes death upon Faith, despite Faith wanting them to heal their differences.

18. Marlon is anxious as his physio Kit arrives at Smithy Cottage to assist him with the next stage of his recovery. Marlon’s dejected after finding his physio session a struggle. When Kit recommends painting as a way to rehabilitate his motor control, Marlon is quick to reject the idea. Mary, however, sets about changing his mind.

20. Mercedes turns to old habits, at the very same time Wendy drops Bobby off for the afternoon, seemingly as a gesture of good will. Bobby proceeds to question Wendy about what happens next. Wendy, however, feeds him doubts about Mercedes’ capabilities. Afterwards, the schemer airs Mercedes’ dirty laundry in front of Bobby, before the courts make a shocking decision about the little boy’s welfare!

21. For his first date with Serena, Imran invites their friends along for support, which leads to Theresa playing goalkeeper at the park. Later, when Serena suggests something more intimate, Imran hurriedly makes an excuse to leave, but will Serena get the wrong impression?

22. Things get tense between Warren and Maxine when he implies that he doesn’t believe she’s unwell, but is he wrong? Liberty, meanwhile, is brought in under similar conditions, and Warren and Sienna must lean on each other for support. But a moment of passion leaves him with a decision to make between the two women in his life!

23. Honour helps Cindy find her happy place as she struggles to cope with Luke’s declining condition.

24. James is seemingly a new man as he makes the surprising choice to get help for his gambling if his family agrees to group counselling, but is all as it seems?

25. It’s the launch of a menu at The Dog and Tony is determined to make sure it goes well. Ahead of the livestream, he asks Imran to taste a new dish, but Imran fakes a mouthful.