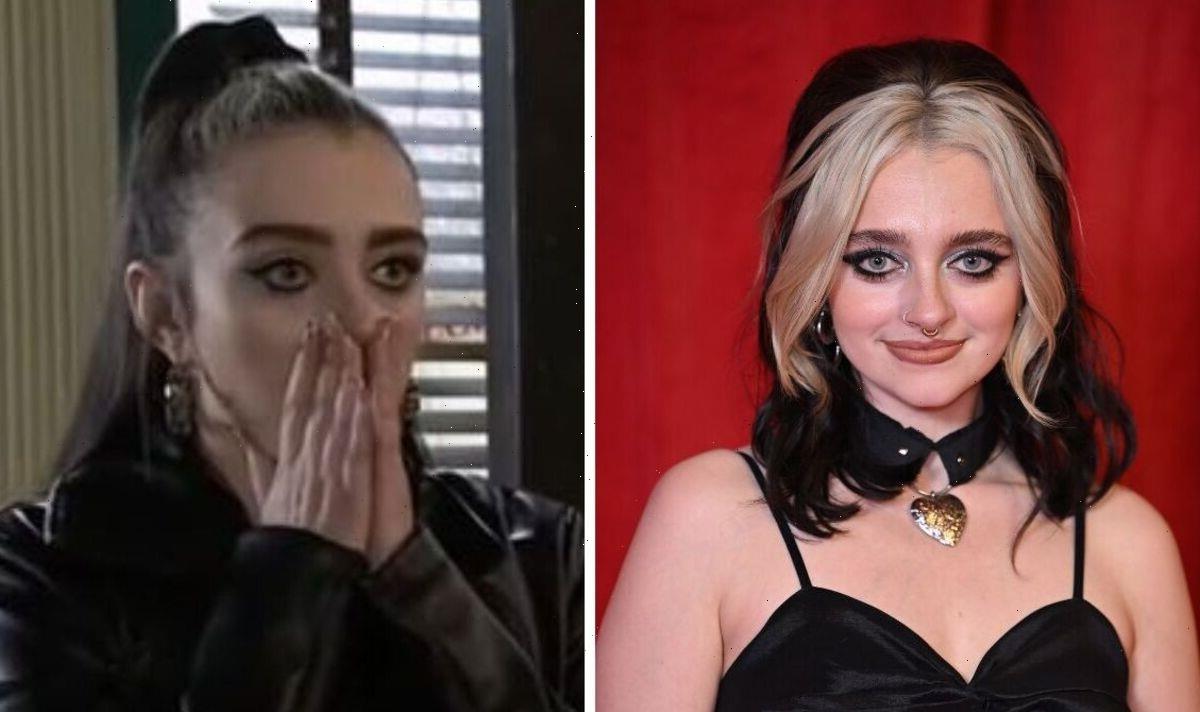 This week, ITV viewers tuned in to watch a second batch of celebrities make their Dancing on Ice debut. One of these was soap star Mollie Gallagher who impressed the judges with her first routine. Although as training for the show is known for being intense, she spoke to Express.co.uk about her character’s future in Coronation Street as she juggles both ventures.

The Dancing on Ice star is best known for playing Nina Lucas in the ITV soap after joining the cast back in 2019 as the long-lost niece of Roy Cropper (played by David Neilson).

Throughout her time on Coronation Street, the actress has been involved in harrowing storylines such as being the victim of a hate crime which landed her an NTA in 2021 for Best Serial Drama Performance.

With her character quickly becoming a much-loved resident in Weatherfield, many fans feared she’d make a soap exit after it was revealed she’d be competing in the new series of Dancing on Ice.

Speaking to Express.co.uk and other media publications, the 25-year-old was asked whether or not Nina will be being written out of the soap.

She replied: “I’ve still been filming!”

A Dancing on Ice representative also confirmed Nina’s character isn’t being written out of the soap while she’s in the competition.

Touching on the actress’s hectic filming schedule, her fellow Dancing on Ice star Carley Stenson commented: “I don’t know how Mollie’s doing it!

“She does 12-hour days shooting and then trying to skate, finding a rink that’s available to get.”

Admitting she loves being busy, Mollie added when she’s shooting for the soap up North, she struggles to find a rink.

Throughout the years there’s been an array of soap stars competing in Dancing on Ice including Sally Dynevor who took to the ice last year.

Speaking about the advice she’s gotten from her co-stars, Mollie shared they’ve all been extremely supportive.

She said: “They all just say it’s the best experience ever and it really is. Also to enjoy it, there’s no point in panicking, it’s good fun. Just do your best and it’ll all be good.”

After her first routine on Sunday evening, the actress was awarded a total score of 26.5 by the four judges, putting her joint third on last weekend’s leaderboard with Darren Herriott.

However, storming ahead with an impressive 34 out of a possible 40 was Carley Stenson and her partner Mark Hanretty.

Speechless over the scoring, Carley told hosts Holly Willoughby and Phillip Schofield: “Oh my gosh I’m having the best time, thank you!”

Olympic skater Christopher Dean had nothing but praise for the actress as he said: “I wrote down, excellent wonderful, lovely and sublime.”

However, on the other end of the scale was John Fashanu who found himself in the skate-off against Ekin-Su after both getting the lowest public vote.

Although they both took to the ice to try and secure their place in the competition, it was former Love Island star Ekin who the four judges decided to save.

Speaking about his short Dancing on Ice time, John confessed it was a great experience and he’ll continue to skate after the show.

Dancing on Ice continues Sundays on ITV1 and ITVX from 6:30pm