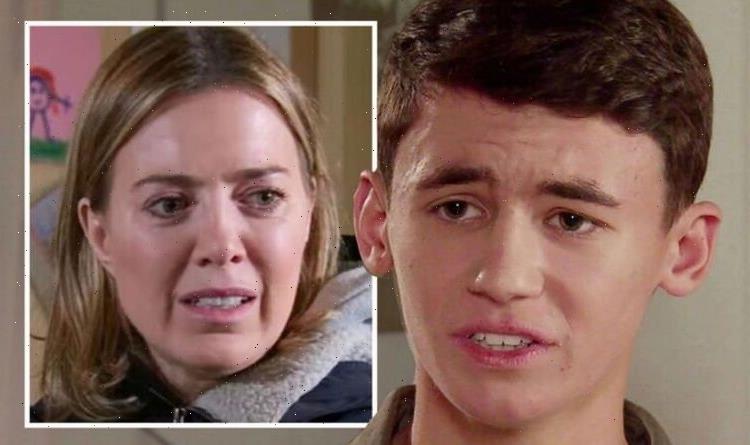 Corrie: Jack Webster makes a joke about his amputated leg

Jack (played by Kyran Bowes) was delighted when Abi Franklin (Sally Carman) wanted to adopt him after she married his father, Kevin Webster (Michael Le Vell) on Coronation Street last year. However, his world came crashing down around him when it was revealed his mother figure had cheated on her husband before their wedding and the dream came to an abrupt stop. In Wednesday night’s episode of the ITV soap, the youngster discovered his mother-to-be had given birth to a baby but he was left devastated when he discovered it wasn’t his half-brother. Though, as Kevin tries his hardest to help his wife in the aftermath of all the revelations, he could end up losing his son in the process.

The episode began with Debbie Webster (Sue Devaney) telling Abi she was the headline news for abandoning her baby in the hospital shortly after giving birth.

As the news spread around the cobbles, Abi was more focused on being with her son as he was going to have major surgery.

With the baby undergoing an operation on his bowel, the mechanic received a visitor and she was stunned to see Kevin sitting in front of her.

For the past couple of weeks, he had been living away from Weatherfield as he took Jack on a holiday to get away from the drama unravelling at home.

His sister had filled him in on everything and although he was still furious with his wife for cheating on him, he knew he still loved her.

Also knowing the child wasn’t his, believing the lie Abi had told him the baby was Seb Franklin’s (Harry Visinoni) father’s, Kevin was willing to stop up to the plate.

With his wife needing a stable home and address to help her case to get custody of her son Alfie, Kevin said she could remain living at the Webster household.

The mechanic was over the moon but knew it wasn’t going to be straightforward living with her husband and his son as she had messed up.

Needing to tell his son about the developments, Kevin took him to the bistro and also told Debbie what was going to happen.

It’s fair to say the youngster wasn’t happy as he told his father: “I don’t care, I don’t ever want to see Abi again.”

“Look, I know you’re angry, but it’s not as simple as that,” Kevin explained adding Abi would be staying with them as she fought for custody of Alfie.

“She’s desperate, I can’t just chuck her out. I can’t have her sleeping on the street,” he continued, with Jack telling him in no uncertain terms: “I’m not staying at the house whilst she’s there.”

“So where you going to stay?” his father asked, to which he replied: “Anywhere. I don’t want anything to do with her.”

Later on in the episode, Kevin explained his sister Debbie was going to look after the youngster as Abi continued with her custody case.

Unfortunately, she read the situation wrong as she tried to plant a kiss on Kevin, who told her this didn’t mean they were going to get back together.

By the end of the episode, Abi told her husband although she appreciated his willingness to support her, she didn’t feel she could stay with him.

Instead, she said she had enough money to get her a room in a hotel for a couple of nights as she tried to get herself sorted.

It seemed there would be no return to the Webster house for Abi but as she begins to feel sorry for his wife, Kevin could tell her she can come back as long as she doesn’t overstep the mark again.

The mechanic could agree as she would know she wouldn’t have enough money to stay at a hotel for too much longer.

However, this would mean Jack would not return to the Webster household and he could start to think of alternative living arrangements.

Sitting down with his father, he could ask him if he could go and stay with his mother’s aunt, Pam Hobsworth (Kate Anthony).

The former cobbles resident hasn’t been seen in Weatherfield for over 10 years but she still has a fondness for her great-nephew.

Knowing he needs to help Abi, Kevin could decide his son is right in the fact he should move away for a little bit to stay out of the drama.

This would give Abi enough time to fight for custody of Alfie and when the case is over, Jack can return to living with his father.

At this point, Abi could have found herself a new place to live and will be getting used to life without her husband.

However, a twist in the tale could be Jack would not want to return to the cobbles as he feels his father put Abi first.

Kevin would try to explain this was not the case and he was trying to protect him but the youngster would be having none of it.

He would tell the mechanic he is going to stay with his aunty Pam for the foreseeable as he wants to break ties with his father.

Could this be the end of Jack’s time on the cobbles and will Kevin blame Abi for driving his son away from him?