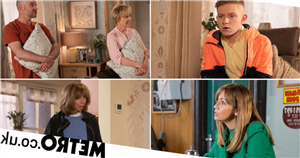 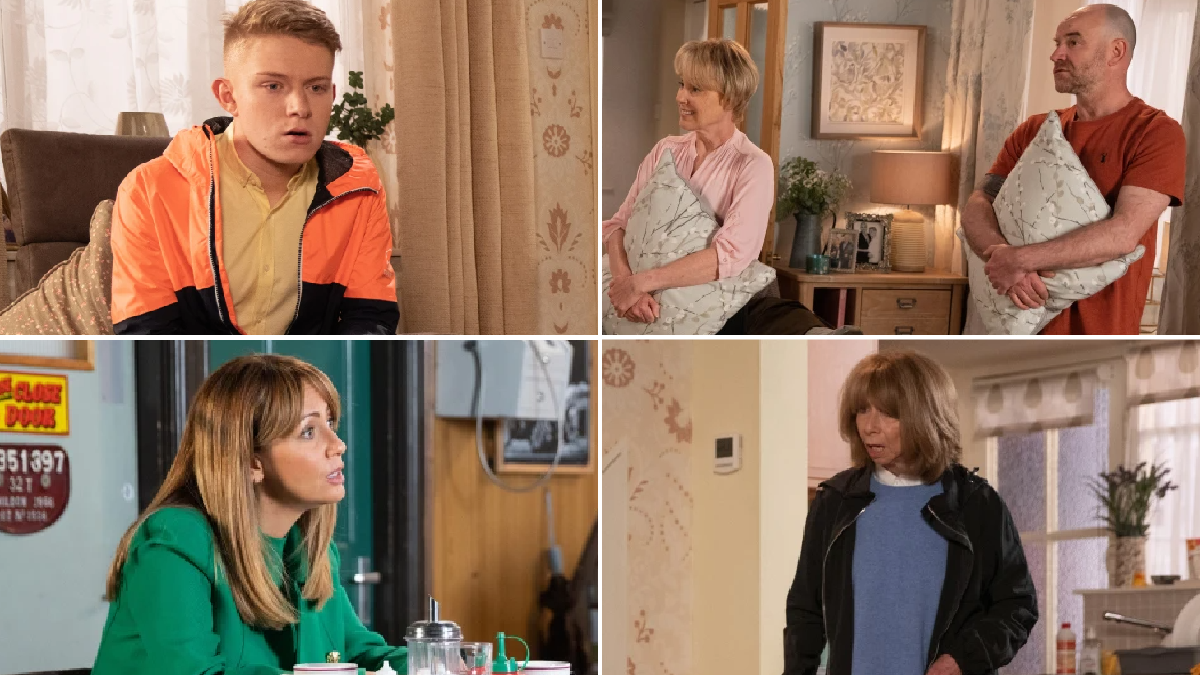 The Platt family is facing turmoil in next week’s Coronation Street as fears grow for Audrey Roberts (Sue Nicholls) amid her drinking.

As relatives worry about how much she is putting away, a rift forms but then Audrey finds herself injured – under a motorbike.

Tricked into sending a nude picture of himself, Max finds himself in a deeply uncomfortable situation…

As Max prepares for his date he receives a message from Sonya asking him to send her a picture of the whole package so she can see what to expect. Max is stunned but returns home unbuttoning his shirt.

Over dinner a perplexed Sonya reveals that she’s never received any messages from him nor sent any back. Max and Sonya are horrified to realise someone has set them up. Outside Max’s phone pings with a message demanding £1k or his naked picture goes viral!

Shona agrees to keep an eye on Audrey, on condition Gail disposes of the Thai brass elephant. But with Audrey gone walkabout, Gail tracks her down to the Rovers where she tries to wrestle a bottle of red wine from her hand. Audrey and Rita finally bury the hatchet and raise a toast to growing old disgracefully.

A despondent Tim laments to Sally that changing his medication has had no benefit and he’s worried their sex life is over. Sally assures him that she loves him no matter what. Dr Gaddas recommends that he and Sally see a sex therapist, Tim’s not keen.

Rita finds Audrey in the Rovers, enjoying her first drink of the day.  Pointing out that she owns the barbers, Rita suggests it’s time Audrey went back to work. David despairs as Audrey announces she’s returning to work, before cracking open the wine and flirting with Ryan who’s in for a cut.

David asserts it’s time Audrey went home, but as she heads for her coat, she trips over the Thai elephant, sending her sprawling across the floor.

Arriving to find a tipsy Audrey playing table football with Ryan, Maria insists she go home but Audrey refuses. At her wit’s end Gail tries to talk some sense into Audrey, but when she raises the subject of her drinking, Audrey hits the roof and announces she’s moving back home with immediate effect.

Meanwhile at the barbers, Audrey staggers into the motorbike which falls and knocks her over as Audrey cries out for help.

Trina conducts the first sex therapy session and urges Sally and Tim to gaze into each other’s eyes. Tim feels awkward and declares it a total con and a waste of time. Sally’s disappointed by his attitude.

David reaches a decision and tells Max that they won’t be paying the blackmailer and he’s to go to school and front it out. At the bus stop, Chris and Blake take the mickey out of Max, quoting his messages to Sonya.

A despondent Maria tells Gary that the recycling collectors are going on strike because of the extra bins she set up and it’s all her fault. After a meeting with Adam, Peter angrily tells Carla that there isn’t enough evidence to bring Mr Thorne to justice. Carla reckons he should let it lie

Audrey lies motionless in the barber’s having been there all night. A passing Brian and Elaine hear a weak cry coming from inside. As Brian hurries off to fetch help, Stephen Reid emerges from a taxi. Breaking down the door, Stephen’s shocked to find his mum barely conscious.

Meanwhile the Platts have called a family meeting to discuss Audrey’s drink problem with Peter. As they debate Peter’s advice, Brian dashes in with the news that an ambulance is outside for Audrey, who’s in a bad way.

Stephen’s furious with the family for failing to notice that Audrey was missing all night. As he leaves for the hospital in the ambulance with Audrey, Gail’s sick with guilt and worry.

Aggie confides in Tim that she and Ed have had a stupid row but late for a lunch date with Sally, Tim doesn’t have time to listen. Sally and Tim pretend to be on a first date but Tim’s distracted to hear Ed telling Ronnie and Debbie about his row with Aggie. Fed up of being ignored, Sally heads home.

Maria meets with a team leader from the refuse workers’ depot, and offers to propose a pay rise, on account of the extra workload caused by the new recycling bins. Maria hopes it’s enough to get the binmen back on the job.

Ken and Simon are concerned when Peter resolves to get Thorne to confess to malpractice. Meeting Thorne he demands a full confession and apology. But Thorne susses his game and forces Peter to produce his phone which is recording.

Eileen despairs as George continues to ignore Frank. Having got the lowdown from his mum, Todd tells George they need to expose Frank for the bully that he is.