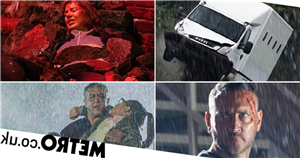 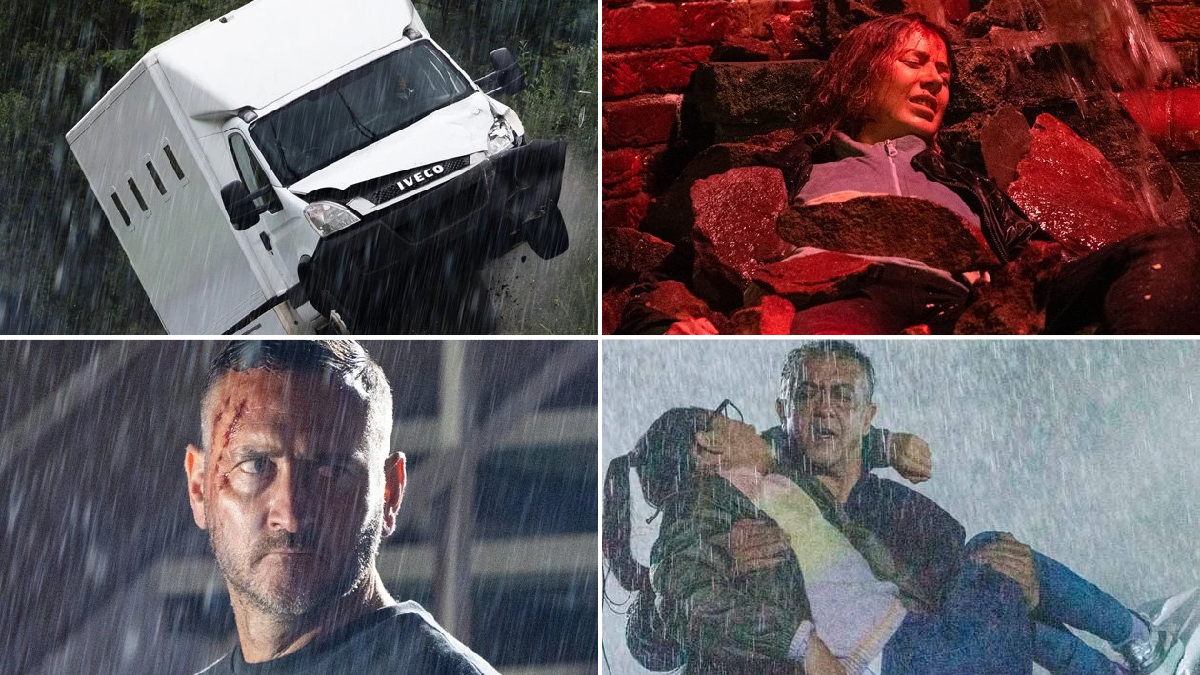 Coronation Street is airing some seriously stormy scenes in a major week – both literally and figuratively.

With a sinkhole swallowing characters, a van crash putting a family’s lives on the line and Harvey Gaskell (Will Mellor) back for a killer revenge on Leanne Battersby (Jane Danson), who will live and who will die.

Harvey deliberately injures himself in prison and demands to go to hospital.

Dev, Aadi and Asha set off for their trip but as the storm gets worse they  get lost on a country road and their way is blocked by a fallen tree.

On the same lane in the prison van the guard pulls a knife and the van swerves into the Alahan’s stationary car, Harvey pulls himself out of the van into the torrential rain and prepares to escape.

Debbie makes last minute preparations for her House of Horrors event, the drayman drops barrels of beer by the beer tent. Nobody notices that as each barrel lands, a tiny amount of earth dislodges itself into the Platts’ sinkhole. The storm starts to blow in.

Abi watches an instagram video of Corey packing for Germany and packs a gun into her bag. Nina discovers what she is planning. Abi is shocked to find police outside Corey’s house.

Abi goes in search of Corey but with everyone in Halloween masks it proves tricky. Eventually she confronts him and as he goads her she prepares to pull the trigger – when the ground gives way beneath them.

Abi and Corey find themselves trapped in a Victorian sewer, unaware that the gun lies midway between them on the ground.

Alone in the bistro Leanne, dressed as Morticia, finds herself face to face with Harvey.

Carla breaks the news to Jenny that Johnny is moving to Bali. Jenny’s stunned.

At the House of Horrors the music suddenly cuts out as a panicked Ryan peers out of the tent through the rain, he and Debbie realise the generator has gone and there is a hole in the ground where it one stood.

Trapped in the sewer and with the water rising around them Abi and Corey have a face off but who has the gun and what will Roy find when he peers down into the hole?

The emergency services arrive at the crash site but are they in time to save Aadi?

Harvey has Leanne trapped in the Bistro, when she tries to escape he gags her and binds her hands together with gaffer tape. Can she escape?

In the beer tent, Jenny tells Johnny that she hopes he isn’t leaving because of her.

Ryan shows Leo the hole where the generator was. Leo tells David and Shona that he suspects it’s linked to the sinkhole in their garden and they need to evacuate the area.

In the beer tent, Ryan calls everyone to attention and announces that they need to leave. Debbie’s furious and assures everyone that there’s nothing to worry about.

Intent on murder Harvey gives chase as Leanne tries to escape but suddenly the ground opens up. Who has fallen into the water below?

As panic ensues Shona watches in horror as Jenny searches for Johnny only to be swallowed up by the ground. Ignoring Shona’s words of warning, Johnny edges himself into the sinkhole, determined to rescue Jenny.

Dev waits for news at the hospital.

Can Roy save the day as there is a deluge of water in the sewer threatening to sweep Corey and Abi away?

In the sewer, Johnny hears Jenny’s cries for help and battles his way through the water towards her. As the water continues to rise, Johnny assures Jenny that it’s only a matter of time before someone rescues them.

Have Leanne and Harvey survived? Will Harvey live to carry out his revenge?

An emotional Dev sits at Aadi’s bedside, willing him to wake up.

The police have some questions for Roy, will he tell the truth about what he saw?

As the water below continues to rise, Johnny and Jenny scream for help clinging to the ladder, On the street, David and Shona help Leo prise open the manhole cover outside the factory.

To David’s horror, Shona takes matters into her own hands and grabbing a rope, disappears down the manhole in search of Johnny and Jenny. Will any of them get out alive?

At the hospital Kevin is shocked to hear what has happened to Abi.

Dev struggles with his guilt over the accident.

Nick makes a shocking discovery at the flat.