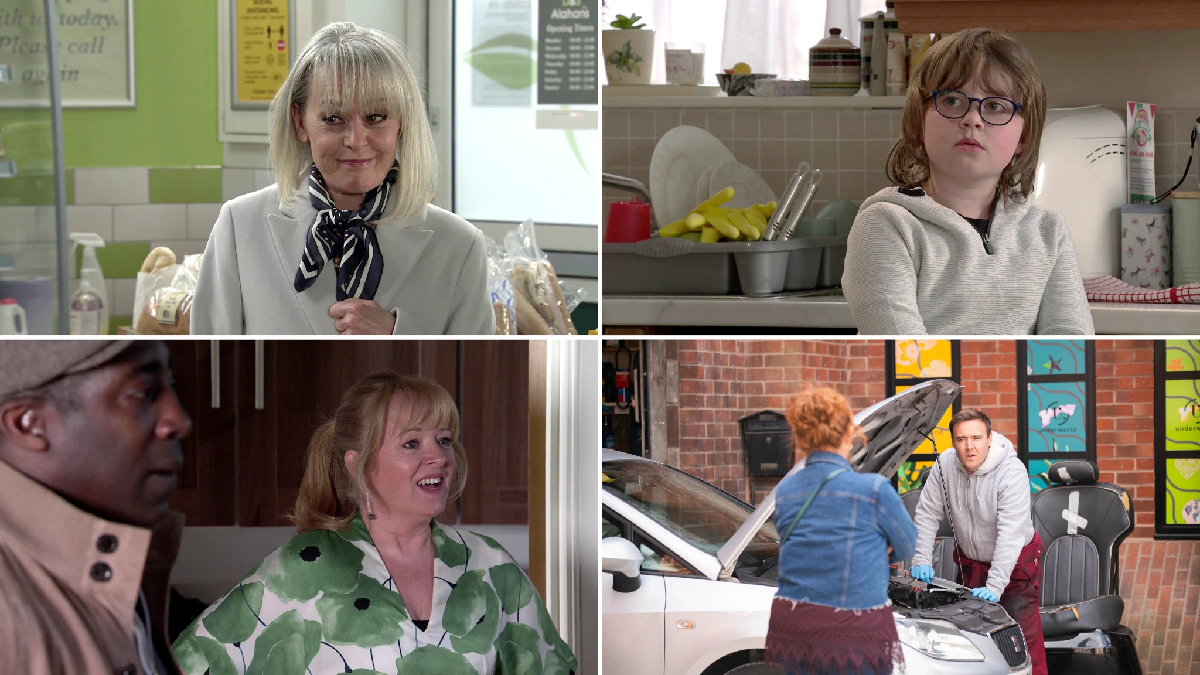 Dramatic Coronation Street storylines continue to develop as Asha Alahan (Tanisha Gorey) takes a stand against Corey Brent (Max Evans) – but can she get justice for Seb Franklin (Harry Visinoni)?

Monday May 17 Part One

Ed returns from Birmingham and is perplexed to find his campervan gone. How will he react when he finds out what Ronnie had done to it?

As Ronnie suggests to Jenny that she could come with him to pick up Ed’s camper van, Daisy clocks their intimacy. Jenny is uncomfortable when Johnny calls and quizzes her about the new B&B guest.

Having returned to The Rovers, Jenny thanks Ronnie for the ride in the camper van and the chemistry between them is evident. Will they act on it?

Natasha drops Sam off with Gail for the day. After cleaning Natasha’s house while Audrey babysits for Sam, Gail is shocked to discover he has made an electricity conductor board using Natasha’s silver bracelet and takes it off him. When Natasha returns to collect Sam, she is baffled to spot her bracelet in Gail’s purse.

Sean finds Carol chatting to Daisy in the Rovers. Daisy reckons Sean should sign up Carol to Double Glammy.

Jenny tries to get Ed and Ronnie to settle their differences over a drink in The Rovers. As Ed and Ronnie bury the hatchet and reminisce about their childhood, they’re interrupted by the arrival of Kat.

Both Ed and Jenny are shocked when Kat reveals she is not Ronnie’s business partner but his wife. How will Jenny react?

Aadi wonders why Asha has decided to defend Corey and reckons she’s hiding something. Asha confides in Aadi how she despises Corey, she reckons he’s guilty as sin and she’s only pretending to take his side in the hope that he’ll slip up and she’ll get to the truth.

When Natasha accuses Gail of stealing her bracelet, an upset Sam admits he took it, not Gail. David accepts Natasha’s offer to lend them the money to fix the sink hole. Natasha suggests to Gail that she should set up a proper cleaning business.

Sean refuses to sign up his friend Carol to Double Glammy. Carol takes offence and reckons he doesn’t think she’s good enough. Daisy is mystified at Sean’s refusal to sign up Carol.

Sharon tells Harvey how she plans to find out Simon’s gamertag and trace him online. Having formed a plan, Sharon invites Dev to share a bottle of wine with her.

Wednesday May 19 Part One

Jenny makes it clear it’s time Ronnie moved out. Ronnie’s shocked, while Daisy is intrigued. Daisy finds a distraught Jenny in the Bistro. A dejected Ronnie tells Ed that he’s going to sell his half of the business to Kat and then see where the mood takes him. Ed’s shocked to realise he’s leaving.

With his bags packed, Ronnie begs Jenny to give him another chance. Will she agree? And what will Johnny think as he arrives home unexpectedly with a bunch of flowers?

Sharon thanks Dev for a lovely evening, but makes out she lost an earring and it’s most likely at his house. Dev hands over his keys and Sharon can’t believe her luck. Sean reckons Dev misread the signals and Sharon has got the hots for him.

Sharon lets herself into Number 7 and messages Simon from Aadi’s console. Will he take the bait? And when Dev returns, worried that Aadi might see her message to Simon, she convinces Dev to ban Aadi from his console for a week as his choice of games is far too violent.

Alina confides in Tyrone that she’s not ready to look for a new flat as the salon flat reminds her of Seb and she finds it comforting. Tyrone’s understanding. When Debbie announces that she’s selling the salon flat and wants them out, Tyrone wonders how he’s going to break the news to Alina.

Roy is perturbed to find a bin bag full of Nina’s dresses. Asha offers to look after them in the hope Nina will change her mind and Roy’s grateful.

Over lunch in the café, Sean admits to Carol that Double Glammy isn’t all it’s cracked up to be.

After some awkward introductions, Ronnie explains that he’s just leaving. Picking up his bags, he heads out. Johnny hugs Jenny, glad to be home and thanks Daisy for looking after Jenny while he was in prison.

Ronnie calls to say goodbye to Ed. When Ed suggests that he can stay in the campervan, Ronnie’s delighted and grateful to his brother for the lifeline.

Dev’s in his element when Sharon agrees to go round to Number 7 for another drink. Dispatching Dev to the shop for some vodka, she logs onto Aadi’s gaming console and sends a message to Simon asking him where he is. Will Simon give anything away?

Debbie offers Tyrone first refusal on the salon flat if he wants to buy it. Tyrone plucks up the courage and asks Kevin if he’d consider lending him £8,000 towards a deposit on the salon flat.

Daisy goes behind Sean’s back and signs up Carol as a Double Glammy rep.

Finally, Asha texts Corey, determined to win his confidence and find out the truth.

When Natasha discovers from Sam that he has been in touch with Nick, she confiscates his phone. Sharon clocks that Sam and Natasha are due to have tea with Gail and tips off Harvey, sneakily taking a photo of Sam that she then shows to Harvey’s sidekick.

As Sam approaches Number 8, Noddy lures him into his van, slams the doors shut and drives off. A grim Sharon watches from Rita’s flat, aware she has done something terrible.

A worried Natasha calls at Number 8 and explains to Sarah and Shona that Sam has gone missing and she can’t call him as she confiscated his phone. Natasha calls the police to report Sam missing while Sharon plays the concerned friend, but how far is Harvey prepared to go?

At the hideout, Nick and Leanne are told the news that Sam has gone missing.

Johnny assures Daisy that he loves Jenny, he hasn’t been the best husband but he intends to make it up to her. Ronnie agrees to keep his distance but they are both troubled when Ed insists Johnny go back to Number 3 for a game of dominoes. At the same time, Jenny is uncomfortable when a downcast Fiz pours her heart out about Tyrone’s affair.

At Number 6, Yasmeen and Elaine survey a pile of empty pizza boxes with revulsion. Elaine reckons it’s time Cathy started pulling her weight. Cathy ignores Brian’s phone calls and tells Yasmeen that she feels safe at her house. Clearly with no intention of going anywhere, Cathy takes delivery of an exercise bike. Yasmeen and Elaine share looks of dismay.