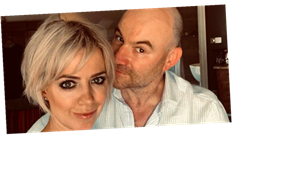 Coronation Street’s Joe Duttine and Sally Carman have opened up on their recent engagement following a romantic lockdown proposal.

The couple, who play Tim Metcalfe and Abi Franklin on the ITV soap, are set to tie the knot after Joe proposed while in quarantine at home.

Appearing on Good Morning Britain, the pair revealed how they fell for each other behind the scenes on the show, saying they “clicked slowly”.

Sally, 39, shared: “We clicked slowly. We were friends for a while but started sharing puddings and that's when I thought something was on the boil.”

The soap star then joked that she's “glad” they don't share many scenes together, adding: “Johnny is a bit of a joker so he can put you off his stride. I lived with the horse in the back room for a bit. That was all right.”

It comes after Joe shared a picture on Twitter of the pair clinking glasses of champagne in the garden, with a stunning green-emerald ring seen on Sally’s wedding finger back in March.

The actor captioned the image: “She said yes everyone, convid 19 can f**k off…"

His followers flooded the comments section with messages of congratulation as one person said: “Wonderful news! Congratulations to you both, wishing you many happy years together.”

Another said: “Congratulations guys so happy for you (btw beautiful ring).”

A third wrote: “Such lovely news! HUGE congratulations to you both @sallycarman1.”

Sally re-tweeted Joe’s announcement of their news to her own account and wrote: “I did”, along with a yellow heart emoji.

Sally shared the same image of them clinking glasses on her Instagram and wrote: "So this happened…#yes.”

She shared another stunning image of the pair celebrating their engagement in the sun-soaked garden, as they sipped on the champagne while gazing at each other.

Sweetly captioning the image, she wrote: "We’ve got each other."

Joe has starred on Corrie since 2013 as cab boss Tim, while Sally joined in 2017 as Seb Franklin's drug-addicted mum Abi.