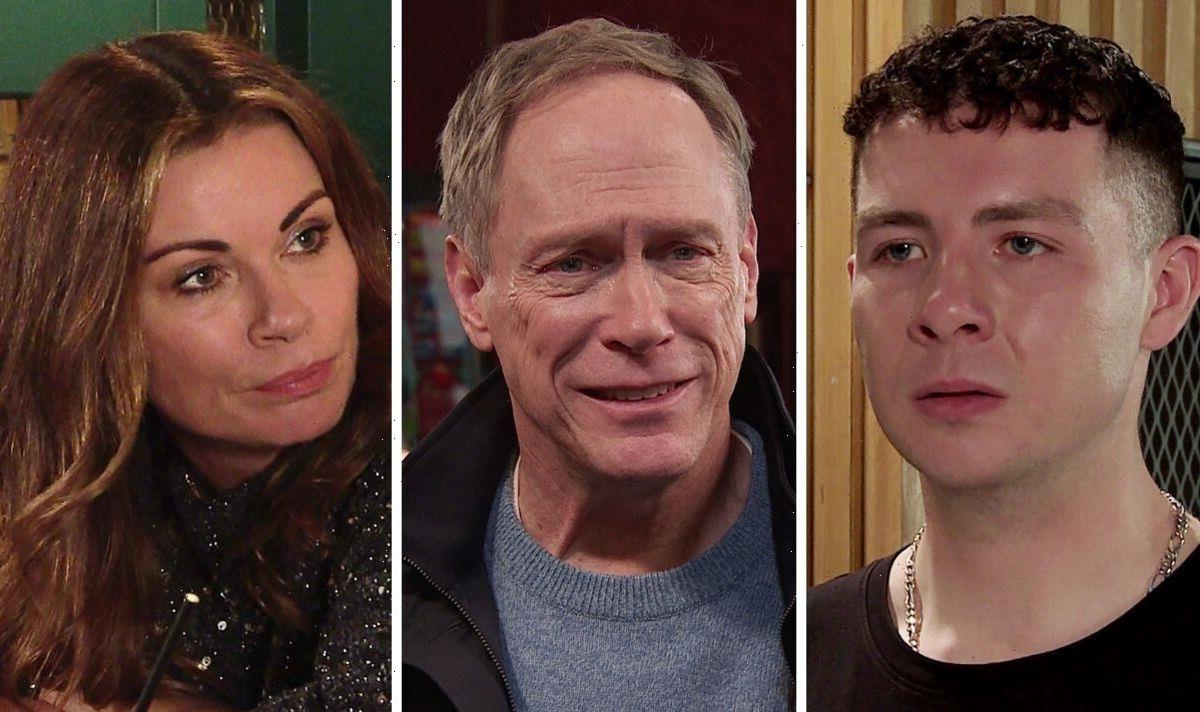 Coronation Street had an amazing 2022 which tackled some important storylines and saw some explosive stunts. Max Turner’s (played by Paddy Beaver) grooming storyline will come to a close in the coming months, with Summer Spellman (Harriet Bibby) getting herself into more danger during her surrogacy storyline. Coronation Street boss Iain McLeod has teased what else is to come for the residents of Weatherfield later this year.

Damon Hay (Ciaran Griffiths) stormed onto the Cobbles in the last couple of weeks and surprised his son Jacob Hay (Jack James Ryan).

However, his intentions aren’t as pure as they seem, with Iain McLeod teasing a showdown between Damon and his criminal brother Harvey Gaskell (Will Mellor).

He explained: “It’s tricky when fictional characters are in jail, how do you import their influence into your show when they’re actually over there somewhere?

“But we’ve overcome more difficult hurdles than that in the past. I’d love to think at some point, we can get Harvey out on the street and stick him in a room with Damon.

“Damon and Harvey would be absolute blood enemies by the time he got out, so the idea of Harvey versus Damon’s and when the future is kind of tantalizing.”

Hope Stape (Isabella Flanagan) recently stole the book which was written about her father and sold them to her classmates.

However, she is set to delve deeper into her father’s past and form an “unhealthy obsession” with his crimes.

Iain teased: “She’s still got the late father’s name for a time even after the wedding and she does start to dwell on her dad.

“She had a little bit of corrupted information, she doesn’t know a great deal about John Stape (Graeme Hawley) and she develops this increasingly toxic curiosity about her dad that leads into some fairly interesting sort of blackly comedic territory.

“She becomes sort of slightly obsessed with John in a way that causes problems with the entire family, as they thought they left their troubles behind them.

“But of course, it was apparent that troubles have never entirely behind due to this difficulty parenting.”

Stephen Reid (Todd Boyce) has been lucky enough to not get caught out over the murder of Leo Thompkins (Joe Frost) and defrauding his mother Audrey Roberts (Sue Nicholls).

He has also had some recent trouble with Teddy Thompkins (Grant Burgin) which is set to upend his life even further.

The boss said: “Stephen encounters some fairly serious jeopardy in the form of Leo’s dad Teddy, he has a whiff of suspicion around Stephen and he thinks he might have something to do with Leo’s disappearance.

“And of course, we know what Stephen did last time he was backed into a corner, so I guess the question is, to what lengths will Stephen go to kind of bridge himself with this new threat?”

Romance on the horizon for Todd, Paul and Billy

Over the last couple of months, Billy Mayhew (Daniel Brocklebank), Paul Foreman (Peter Ash) and Todd Grimshaw (Gareth Pierce) have been looking out for their adoptive daughter Summer.

However, in upcoming scenes, there is set to be a romance on the horizon for two of the trio with Iain leaving fans to guess who it could be.

He admitted: “I’ll leave you to try to guess which of them it might be I know, historically there are very strong feelings for people that are kind of team Todd and Billy, or team Tilly.

“And then the other side of the argument is Paul and Billy and we’ve been back and forth about this since Paul came to the show, really.

“So we picked a team, but actually whatever team ends up being a couple of them, that story will be about three of them. We love that dynamic. It feels entirely unique.”

At the end of the year, a new precinct was revealed in Weatherfield which is set to be the heart of a long-term storyline for the younger cast of the ITV soap.

Discussing the events, Iain teased: “We’ve still got a fantastic cohort of younger cast. There’s a huge story we can tell with them right at the heart of it – it’s very relatable and very teenage.

“We’re hoping it’s the kind of story that shocks a bit and provokes awkward conversations in front of the TV.

“I’m pleased with it. We’re working with charities to make sure we get the detail right and fundamentally it’s just about those brilliant young actors being the superstars they are, then reaching out into the wider street through people who are connected to them.”

Carla Barlow (Alison King) has been the Queen of Underworld for many years, with her workers respecting her judgement and knowing not to test her.

However, Carla could be set to suffer from a relapse in her mental health as Stephen puts pressure on her business.

“Peter’s role in that is essentially being deeply concerned about his wife’s history of mental health problems,” Iain concluded.

“Stephen sees his first step back on the ladder to the top of the international rank trade and getting the gig and Underworld.

“He tries to topple the current Queen of the pile, Carla. So there’s really good psychological warfare that begins between those two and of course, it’s all freighted.”