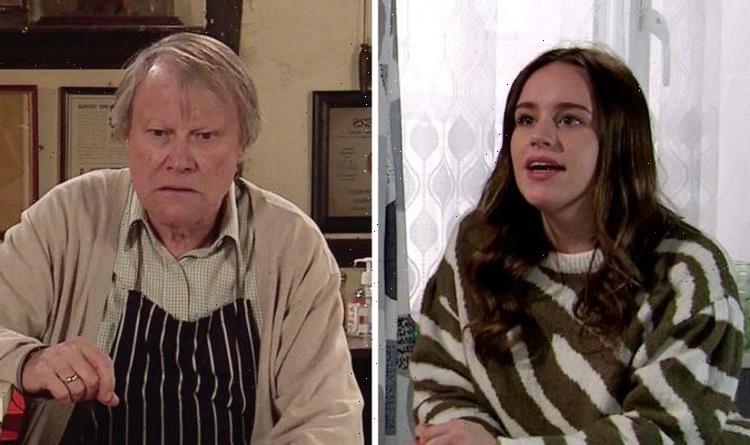 Faye Windass (Ellie Leach) and Emma Brooker (Alexandra Mardell) have been sitting on a dark secret for weeks. In scenes yet to air on the ITV soap, Craig Tinker (Colson Smith) gets closer to working out what happened to an elderly man who died after Faye accidentally hit him with her car. As it stands, only Emma and Faye know the truth about his death but that could all change next week when Roy Cropper (David Neilson) gets involved with helping Craig.

Craig is getting closer to working out what happened to Ted, as well as Faye’s involvement with his death.

Fans of the ITV soap will remember learner driver Faye accidentally hit Ted while she was on a driving lesson with Emma.

While the women were convinced the elderly resident would make a full recovery, he ended up dying from his injuries in hospital.

Emma and Faye are now running the risk of facing time behind bars after covering up the death.

The duo have been trying their hardest to keep everything a secret, but police officer Craig is growing closer to the truth.

The discovery has left Emma and Faye seriously alarmed, but Craig doesn’t know the significance of the item as of yet.

However, in scenes to air next week, Craig is set to get another step closer to solving the crime.

In an upcoming episode, a very bored Craig starts to look out over the street with his binoculars, but he’s left stunned by what he sees.

However, he later pledges to use his time to work out who the original owner of the wooden crutch was.

The officer strikes a £20 bet with Tyrone Dobbs (Alan Halsall) that he will be able to work out who it belongs to.

However, when Faye overhears their conversation, she’s left concerned she’ll be sussed out.

Using the tools available to him, Craig decides to send the crutch to the lab to have it tested for fingerprints.

As he reveals his plans to everyone, Faye and Emma are terrified they will be caught and taken to the police station.

Craig summons the help of Roy who is convinced the crutch could belong to Trafford Health Services.

Later on, Craig heads home and starts investigating the lead Roy gave him while Emma is in the flat.

As he taps on his laptop, he’s thrilled to work out it did belong to Trafford Health Services.

Emma tries desperately to mask her panic, but will Craig sense she’s hiding a huge secret? Will Faye start acting suspiciously when she learns about Craig’s discovery?

Perhaps Craig will head over to Roy’s house to tell him about the latest development with his investigation work.

However, will Roy manage to link Ted’s death to Faye and Emma?

Could he be the Weatherfield resident to report the women to the police and get them arrested?

Coronation Street airs Mondays, Wednesdays and Fridays at 7:30pm and 8:30pm on ITV.