Gentrification, or what can also be described as modern-day colonialism, has always been an invasive parasitic process and a severe detriment to the Black community. In North Philadelphia’s Strawberry Mansion neighborhood, gentrification and harmful city mandates are threatening the survival of the Fletcher Street Urban Riding Club (FSURC), a Black-owned and -operated horseback-riding group that mentors neighborhood children by teaching the century-long tradition of urban horsemanship. The community’s fight has gained plenty of media coverage and, more recently, has made its way to the screen with Netflix’s Concrete Cowboy.

The film introduces a new kind of Western, one that isn’t set on the ranch, but instead on busy city streets. It features Caleb McLaughlin as Cole, a teen who after getting in trouble at school is sent to live with his estranged father and Fletcher Street stable owner, Harp (played by Idris Elba). The story is 100 percent fictionalized and based on the novel Ghetto Cowboy by Greg Neri, rather than the real-life riding club founder, Ellis Ferrell, but the film does feature actual members of the Fletcher Street club within the cast and tackles some very real and ongoing struggles and ideals the club is facing today, such as battling gentrification and systemic racism, developing personal healing skills and a strong support network, and, most of all, simply reclaiming the natural right to be carefree and ride.

The club is a nonprofit with centuries of historical significance.

Sitting outside, surrounding a burning campfire in the middle of the Fletcher Street neighborhood, Rome (Byron Bowers) and Nessie (Lorraine Toussaint), both fictional characters, detail a very real reality. Rome’s words above aren’t too far off. A significant portion of cowboys that existed during the postwar era were Black men. In fact, according to the Smithsonian and African-American history author, William Loren, “Right after the Civil War, being a cowboy was one of the few jobs open to men of color who wanted to not serve as elevator operators or delivery boys or other similar occupations.” Yet, African-American cowboys still faced racism within the towns they passed through, many were banned from eating at certain restaurants or hotels, and still they were not depicted in classic American Western films, as opposed to their white counterparts. So they made their way up to Northern states (and cities like Philadelphia) for more opportunities; up north, being a cowboy was more profitable, because ranchers were selling their livestock at more than 10 times the value of those in cattle capital Texas.

The FSURC itself has become a pillar in the Philadelphia community, having been around in some form for more than 100 years. Ferrell began renting horses in Fairmount Park in the late 1940s, realizing then how powerful riding is and its innate ability to change a young person’s life forever. His dream came true in 2004 when he founded the newer version of what we now know as the Fletcher Street Urban Riding Club.

The Club’s real-life cultural context and community impact are invaluable.

There are many ways a horse can change someone’s life, and a million more ways horses can change a community. One of the several goals of the FSURC is to allow Black boys and girls to feel a sense of personal freedom and confidence that society often tries to strip away from them, as well as give opportunities to communities that have so often been systemically robbed of them. Concrete Cowboy features real-life members of the riding club, who echo these same sentiments. One of those riders is Ivannah-Mercedes, who plays Esha and states in the film, “I live in Philadelphia, and there are people who say to me all the time, ‘What do you mean you ride horses? There are no horses in Philadelphia.’ And I’m like, ‘There are horses all over Philadelphia. In North Philly, we have horses, we take care of horses.’ I think more people should know and know how important the stable is for young people who don’t have places to go.” 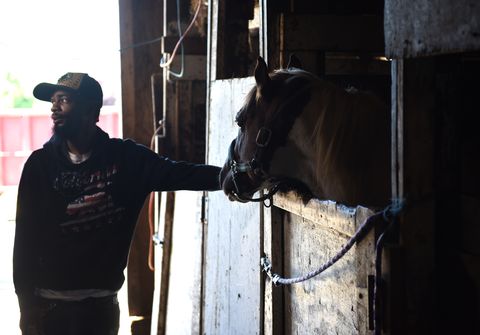 In fact, many have praised the program as a means of physical therapy that can help heal the cycle of generational trauma that has been brought about by systemic racism. Albert C. Lynch Jr., another real-life rider, says in the film that teaching the children is just as beneficial to him as it is to them. “I think I get more joy out of watching the kids that I actually teach, watching them absorb it, then adapt, then make changes. Not just in the stable but in everyday life.”

That crossover application between everyday life and life on the saddle is something Ferrell worked hard to establish early on. “Horse riding is not only therapeutic and instills discipline,” Ferrell shares on the FSURC website, “but it enables a sense of empowerment to the disenfranchised and those living in communities of hopelessness.”

The website goes on to explain, “On weekends there would be groups of them trotting off to equine camp grounds where children were responsible for maintaining and caring for the horses while building character, confidence and self-esteem in the process.”

The stables don’t help just their participants though; they also heavily give back to the community, protect and rescue horses who are abused, and provide homes to those who are in danger of being put down. Further, during a community day last year, FSURC organized a ride out to get the community out to vote in the 2020 presidential election. 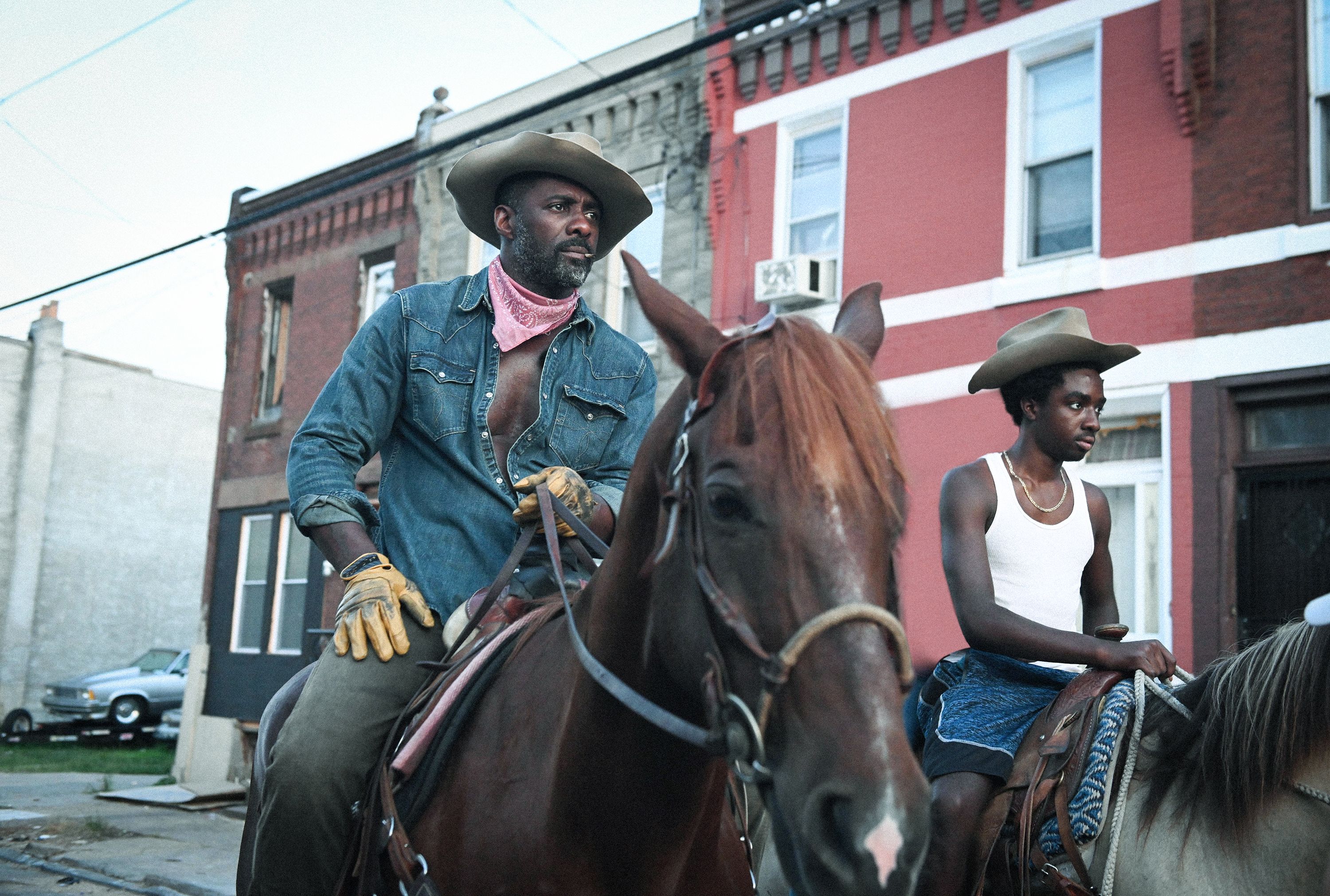 They face a real and looming threat.

Although FSURC continues to encourage academic excellence, provide mentorship, and foster real life-altering opportunities, the club has its adversaries, correctly depicted in Concrete Cowboy: Targeted institutional mandates and gentrification are its biggest threats. At the end of the film, we find out that “the city of Philadelphia is currently developing on Fletcher Street Urban Riding Club’s land. Like generations of cowboys before them, they ride on in search of a permanent stable to preserve their heritage.” Sadly, the targeted threat, coming from various organizations and city officials has followed them since the very beginning.

Just months into the club’s founding, its Brewerytown stables were seized through eminent domain. That’s when the club decided to create makeshift stables on the Fletcher Street lot. However, after an anonymous tip, the SPCA raided the club’s corrals and its petting zoo, which were then bulldozed by the city—a devastating blow to the youth in the community that essentially forced the team to start all over from ground zero again. 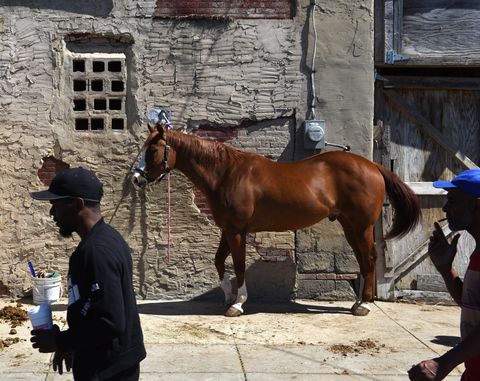 In 2014, the club obtained the space at 2607-11 W. Fletcher St. from the previous owner and spent the next few years building it up to where they once were. However, as the film states, the riders’ way of life is once again being threatened, as the city of Philadelphia has slated development of senior affordable housing at the lots, a move that puts the organization in jeopardy.

Not only does the organization face looming seizure threats from the city, but it also faces the risk of exploitation from outside entities. Despite being featured in the Louvre, and serving as the muse for countless international artists, photographers, and authors, Ferrell says that the FSURC hasn’t seen many donations when they need them most. In a November 29 interview with Billy Penn, Ferrell stated, “I’m known worldwide. I’ve had them from everywhere. Australia, Germany, France, the U.K., Korea, Japan. All of them have been here and did videos of me and they’ve gone back to their countries and won awards. I never got one dime.”

With the future of the FSURC at risk, the right to Black joy and Black self-expression is also at risk. With the rampant closings of YMCAs and youth centers, and now with FSURC at risk, the city continues to shut many Black youths out of the forms of escape, release, and leisure that their white counterparts are so often afforded. This form of gentrification, zoning, and targeting cannot continue to scrub away neighborhood culture. The club has been fighting the city for its right to preserve that joy and community essential for years, with Ferrell working hard to keep the club afloat through his own means and a GoFundMe campaign, to which you can support and donate here.

There are even more groups like the Fletcher Urban Riding Club across the country.

There are many other Black urban horsemanship programs that face the same challenges. Much like the Fletcher Street Urban Riding Club in Philadelphia, the Federation of Black Cowboys in Queens, New York; Detroit Horse Power in Michigan; and Horses in the Hood and Compton Cowboys in Los Angeles all continue to provide community, mentorship, and legacy for the next generation of youth to look forward to. 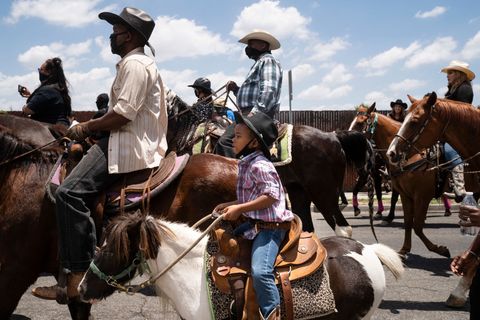