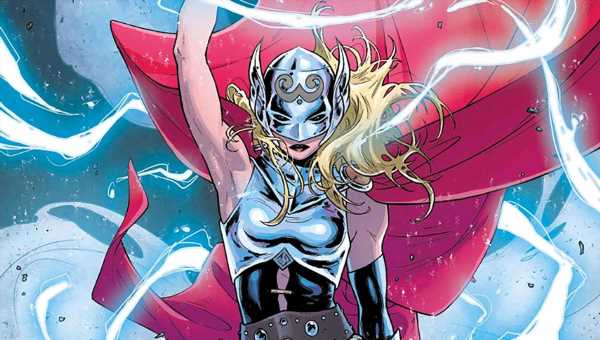 It turns out, that sort of out-of-place Natalie Portman cameo in Avengers: Endgame was a little more important than we might have guessed. Portman, who hasn’t played a major role in any MCU movie since 2013’s Thor: The Dark World, is making her return to the Marvel Cinematic Universe and reprising her role as Jane Foster in Thor: Love And Thunder. There’s one major caveat to go with her return, though: she’ll be wielding Thor’s hammer, Mjolnir.

Director Taika Waititi took the stage at San Diego Comic-Con during the massive Marvel Studios panel to surprise fans. Moderator Jessica Chobot prompted Waititi with a question about what comic book storylines had inspired him, which Waititi was quick to answer. “When we were shooting Ragnarok, I was reading Jason Aaron’s Mighty Thor, and it introduces female Thor [Jane Foster]. So, there’s only one person who can do that.”

Natalie Portman herself then took the stage to massive applause, before being handed her own replica Mjolnir to really drive Jane’s new MCU status quo home.

Jane’s turn as Thor came after Thor Odinson was rendered unworthy by a cosmically aware Nick Fury (don’t ask), who confirmed that a villain named Gor the God Butcher, who believed all gods in the universe were fundamentally horrible and wrong, was “right.” By whispering that simple phrase: “Gor was right,” Thor found himself experiencing such a crisis of confidence that he could no longer lift Mjolnir.

Thankfully, Mjolnir’s powers have some strings attached, if you remember its inscription–“Whosoever holds this hammer, if he be worthy, shall possess the power of Thor.” During Thor’s crisis, Jane, who had actually been battling fatal cancer, was able to lift the hammer and become imbued with the powers. As a deity, Jane’s cancer was also “cured,” but only while she was in her Thor form, creating a dangerous catch-22 when she would revert back to her mortal self.

It’s unclear what the set up for Jane’s transformation in the MCU will actually be, since as far as we know she has been in perfect health, but with Doctor Strange 2’s introduction of the multiverse, it seems like anything and everything is possible.

Thor: Love And Thunder will hit theaters on November 5, 2021.