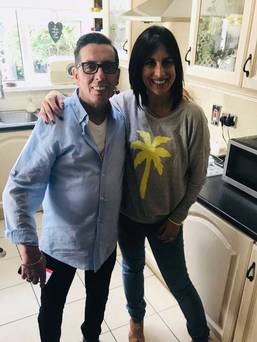 Christy Dignam has revealed that he contemplated suicide at the height of his heroin addiction.

The Aslan frontman, who is currently receiving another round of chemotherapy as he battles cancer, makes the revelation to Lucy Kennedy in the next episode of Living With Lucy.

Christy (57) has been off drugs for more than a decade but he reveals that he once stood at the top of the Ballymun towers and thought about ending it all.

“I remember being on Ballymun towers, [his wife of 33 years] Kathryn had thrown me out and I was on the sixth floor and I got the telly and I threw it over.

“Kathryn will mourn me for a month and then she’ll get the husband that she deserves.  I won’t be causing [daughter] Keira any more pain.

“It was like I was killing them by the death of a thousand cuts and I thought I’d be out of their hair.  I just hadn’t got the bottle… the balls to do it.”

Christy was diagnosed with cancer five years ago and has had several rounds of chemotherapy and brushes with death.  He has had a defibrillator fitted in his chest because, he says, “I flatlined in hospital” and he reveals that he has not slept more than two hours at a time since his diagnosis.

After he was diagnosed he patched up the long-running feud with Bono and U2 which was ignited just after Aslan were signed and Christy bad-mouthed U2 in the press.

When Christy became sick, he says Ali Hewson “sent us stuff” and Bono came to visit him at home.

“He came up and we were talking, next thing he came running in with his iPad and started playing songs off the new album and asking me what I thought of them.  I thought it was lovely,” he says.

Living with Lucy airs on Virgin Media One on Monday September 17 at 9pm.