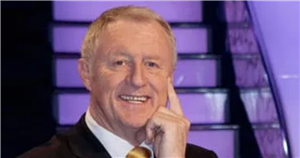 TV legend Chris Tarrant has described his presenting style as that of a “demented duck”, which he only noticed after seeing Michael Sheen mimic him.

The former Who Wants To Be A Millionaire? host spotted his “weird” mannerisms after watching Sheen as him on the hit drama show Quiz.

Sheen won plaudits for his portrayal of WWTBAM presenter Tarrant in the show about the Charles Ingram scandal.

And Tarrant spoke about being stunned seeing how awkward he often appeared on the hit ITV series.

Tarrant said of Sheen’s portrayal of his screen persona: “The voice was pretty close and he is not an impressionist, he is an actor.

“What he got was the body language – just these weird things that I do. like when I’m getting into the chair I do a sort of Fosbury Flop.

“And there is a bit when I am standing with my arm around a contestant when we are about to go on and I did something with my left arm and leg and it is like a demented duck.

“It is all sort of cringe making.

Tarrant, then a successful TV and Capital Radio show host, almost turned down Who Wants To Be A Millionaire.

He said: “This is one of those buffoon moments in your life. I nearly turned it down as I was too busy. It was pathetic.

“I did the pilot and I thought this is quite good, because the format is so perfect.

“We started a series in September for 10 nights and it just went through the roof and then 120 countries round the world. It is massive show. I loved it. I enjoyed it.”

The 75-year-old star recently issued a health warning after he suffered a “very scary” stroke claiming he thought he was suffering from cramp.

The legendary English broadcaster was on return from Bangkok after filming Chris Tarrant: Extreme Railways when he suffered from a stroke on the aeroplane.

Looking back on his ordeal, the presenter admitted that the experience motivated him to overhaul his lifestyle.

“In the first year after the stroke, my kids were terrified. They were thinking it was going to happen again,” he told The Mirror.

“They are wary because they love me to pieces and they don’t want me to go yet.

"I've changed my life a bit, my missus is very tough on food," he added.