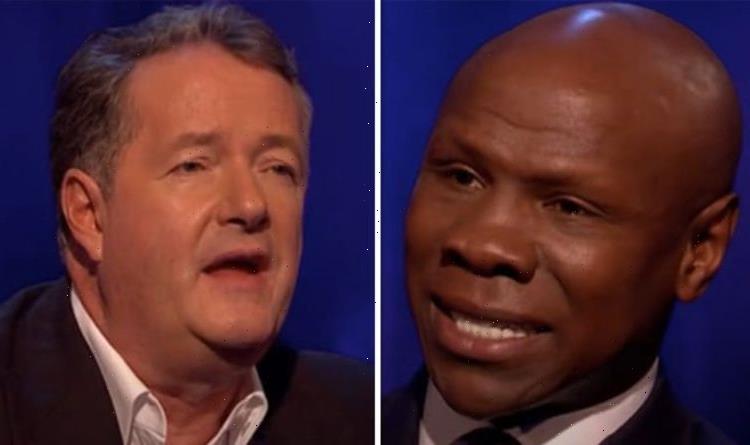 Chris Eubank will appear on Channel 4’s ‘Can I Improve My Memory?’ at 8pm this evening as he puts his mental ability to the test. Over the course of the series, five famous faces from the world of TV, entertainment and sport enter one of the trickiest competitions on TV designed to improve their memories. Mr Eubank and the other celebrities are coached by masters of memory, and are given a week to memorise facts and learn techniques. They are ultimately tested with an on-the-spot quiz.

Mr Eubank’s mental prowess was there for all to see during his illustrious boxing career, which he discussed with Piers Morgan on ITV’s ‘Life Stories’ in February.

During the interview, Mr Morgan asked Mr Eubank about his relationship with his father.

Mr Eubank said: “No, you know, my father taking his belt off is not – that is not violence. That is steering.”

Mr Morgan replied: “It is still violence”, as the former boxer waved his hands in protest.

Mr Eubank hit back: “That is what it is called today and I cannot speak of what is talked about today. I know you cannot talk about your discipline, but you know, these youngsters are going to become menaces to themselves, never mind society.”

At this point, the former Good Morning Britain host cut off his interviewee and said: “You went through a rough time at school. You were expelled multiple times.”

Mr Eubank responded: “Can I just ask you… did you purposely cut me off just now?”

Mr Morgan tried to defuse the situation, saying he “understood” where Mr Eubank was coming through.

Mr Eubank is well known for his unconventional and outspoken nature.

Even the Brexit debate wasn’t free of an intervention from the former WBO middleweight and super-middleweight title holder.

Ahead of the referendum on EU membership, Mr Eubank questioned whether London “should become an independent city or state”, as he argued the capital had a better chance of going it alone than Scotland.

He added that an independent London could have “a GDP at the same level as Sweden or Switzerland”, and may even have a national income “twice as large” as Singapore – a destination described as “the easiest place to do business”.

He also claimed former London Mayor Boris Johnson had suggested around one in five Londoners “would have voted for London to become separate and independent from the rest of the country”, adding: “How many would that number have increased to now?”

One of Mr Eubank’s most famous political interventions came in 2003, when he protested against the invasion into Iraq in 2003.

The former boxer was arrested after driving his huge American truck to Downing Street in a one-man protest against the military occupation.

After arriving for the first time near Number 10 at around 4.30pm he sounded the truck’s horns for a minute and told police: “You must arrest me”.

Before his arrest, Eubank said: “The military occupation [of Iraq] doesn’t work. All it does is cause more terror. If I come into your house with a gun, people will react against me. It’s called terrorism.”