Still grieving over Anna’s death, Voight resolved to make sure she didn’t die in vain by working to prevent any new gangs from springing up in Los Temidos’ place. Because of his fixation with that neighborhood, Intelligence took on another drug case, this time involving the death of a young boy who overdosed on a new drug.

The squad, which included newcomer Torres, eventually took down the parties responsible, but not without some tension. Noticing that Voight hasn’t been himself lately, Upton questioned his judgment throughout the case. Halstead also checked in on him, and Voight isn’t one to be babysat.

In a private conversation with both Upton and Halstead, Voight assured them that he is fine and that he didn’t blame Upton for Anna’s death. (Earlier in the episode, Upton noted that he could barely look at her since the incident.) He then stressed that they need to bury this weird tension that’s brewing between the three of them or they can no longer work together.

“It’s just more complicated and messy than he wants to believe,” showrunner Gwen Sigan tells TVLine. “There is still tension, and we see it come out in a few different episodes this season.”

And given everything that Halstead, Upton and Voight went through with the Roy investigation (including covering up a dead body and nearly going to jail), it’s hard to believe that they can all move on like nothing ever happened — especially Halstead, who challenged Voight to do things differently rather than resorting to lying.

Chicago P.D. Star Teases an ‘Exciting’ Move for #Burzek — Plus, Scoop on the 200th Episode and Voight’s Spiral 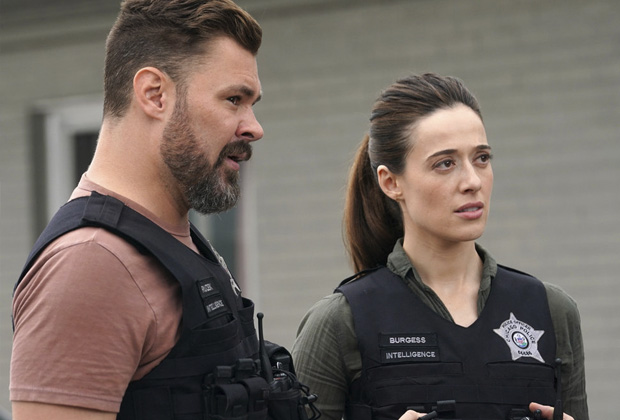 “Since Episode 4 of last season, we’ve seen this trio. We’ve seen the three of them and these relationships changing, and Halstead taking on this almost protector [role],” Sigan explains. “He’s kind of protecting Voight from himself, pushing Voight to be better. Voight, in turn, is also changing him. And then you have Upton, who is also involved in all of this, but dealing with it in very different ways.”

This conflict will continue in the coming weeks and eventually come to a head “with the different fractures that come from the three of them in this untenable situation.”

“This relationship is really built on sand in a lot of ways,” Sigan adds. “It can’t sustain forever. We’ll see more cracks in it, for sure.”

What did you think of Chicago P.D.‘s Season 10 premiere? Grade the episode below, and then let us know your thoughts in the comments.