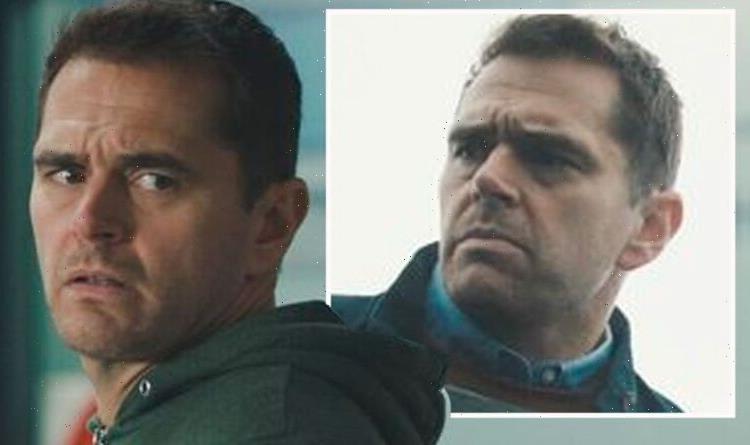 Iain (played by Michael Stevenson) and his partner Chrissie (Lauren Crace) finally decided a couple of weeks ago on Casualty to give their relationship a chance, after months of worrying they couldn’t commit to a romance. Ever since the pair have become one of the BBC medical drama’s strongest couples as they carry out their roles together as paramedics. However, in upcoming scenes on the television drama, they will have very different opinions on how to deal with a patient and this forces Iain to make promises he cannot keep.

The drama begins in Saturday night’s episode of the weekend serial drama as Iain and Chrissie take some time out of their jobs to enjoy some couple’s time.

They want to pursue wild swimming and as they inspect the river, to see whether it is safe enough to dip their toes into, they discover someone has thrown something big into the water.

As they get closer, they realise the item is actually a body and Iain dives into the water to try and save him as his paramedic instincts kick in.

Disrupting their plans, the pair end up taking the mystery man into the Emergency Department where their colleagues begin treating him.

At first, it seems the man has been beaten up but as they work on the patient, it seems something else is happening behind the scenes.

Also suffering from the impact of going into the water, Iain is treated for hypothermia before giving his statement to the police.

As he recalls what happened, it’s not long before he and the officer make the same conclusion, this is a victim of modern slavery.

Although Chrissie urges her partner to stay away from the case, he can’t help but become intrigued and he starts to speak with the man he saved.

As the pair begin talking, Iain discovers the man is from Eastern Europe and he has no documentation on him, making his entry into the UK illegal.

Desperate to stay in Britain, the man asks the paramedic if he can strike a deal with the police to stay if he offers up information.

Iain does his best to try and help the man but as things take a deadly turn, a knife is pulled on the paramedic as he gets too close to the truth.

Injured, Iain is once again defrayed back to Holby where the team treat his wound as fortunately, it is not too deep.

Unfortunately, this has a detrimental impact on Chrissie as the reason their relationship didn’t work before was because she was worried he was going to get hurt.

But the paramedic tells his partner he needs to get to the bottom of what has happened as this is a human’s life on the line.

However, Chrissie can’t hold back and she tells Iain he is too emotionally involved with the case to remain objective.

Chrissie begs for her partner to trust the police and let them do their thing, so he can stay safe and not get hurt.

She tells him it is not his battle to fight and he has to keep safe so they can continue to have a strong relationship.

The paramedic promises his partner he is going to leave the case be and will put all of his efforts into their romance.

Unfortunately, this was a lie as Iain is soon drawn back to the river where he saved the patient’s life but what does this mean?

As well as having to keep his investigation a secret, Iain could also have a connection to the modern slavery ring seeing as he is so persistent to get to the bottom of the matter.

However, when Chrissie discovers Iain’s secret and what he has been up to behind her back, she is going to be less than impressed.

This could be a deal breaker as to whether their relationship continues or not as she wouldn’t be able to trust him in the future.

The pair have so much promise to become a great couple on the show and they could go all the distance.

But when it comes to relationships, Iain’s track record isn’t great and once again, this could be heading for disaster.

As Chrissie gets involved at the wrong time, she could end up being a victim of the dangerous situation her boyfriend has got himself involved in.

Will Iain be left feeling an immense sense of guilt as Chrissie dies as a result of him pursuing this case on his own?

This storyline was hinted at in the show’s official Spring trailer, teasing some of the most dramatic moments of the new few months,

It is shown this modern slavery storyline will have a huge impact on the paramedic’s relationship and Iain will put himself in harm’s way.

Could it be Iain is the one who ends up dead as his mission to be a hero ends in tragedy for him?

Casualty continues tonight at 8:35pm on BBC One.