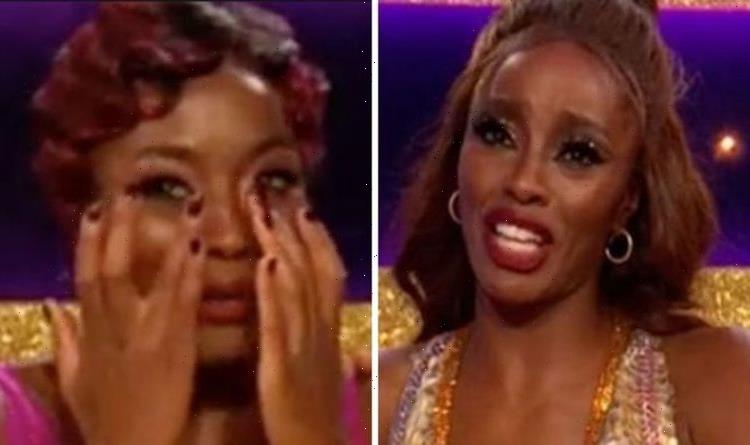 Speaking to Express.co.uk and other media on Wednesday, the TV presenter explained she may not be able to take part in the final if her injury hasn’t improved. AJ Odudu made it through to the final of Strictly Come Dancing alongside part Kai Widdrington last week, but she now faces the possibility of being unable to perform on the last episode of the 2021 series.

AJ and Kai have been among the favourites on the BBC competition from the start, and have impressed both the public and the judges enough to have earned their place in Saturday’s final.

Speaking to media ahead of the big night though, the 33-year-old explained why she might not be able to dance.

“There’s a bit of ligament damage going on there,” she explained, referring to her bandaged foot.

She added: “Which is what I want before the final.”

The presenter continued: “Basically, I hurt the ligament in my foot and I can’t put any weight on my foot at all.

“We have not been training because I can’t stand up, and I’m doing everything I can to try and be there on Saturday night.”

She admitted she was “frustrated and upset” over the incident and that she hoped she could get by on little training if she is able to take part in the live show.

“It’s really frustrating because the two dances that we are repeating from the series, we’ve not performed them for weeks and weeks,” she commented.

“And without giving too much away, they’re energetic dances.

“So on Monday, we were like, ‘you know what, the steps are still there, we’ve just got to build up the stamina for Saturday night’.

“And then, for the show dance – the beautiful, epic snow dance – it’s one of those things that you need to practice in order to give it everything.”

She added: “So at this moment in time I’m very frustrated and upset.”

AJ and Kai, along with the other finalists Rose Ayling-Ellis and Giovanni Pernice, and John Whaite and Johannes Radebe, are set to be performing three dances on Saturday.

One will be picked by the judges, one by the couple themselves and the final will be a show dance.

AJ and Kai have experienced a full Strictly journey, with some weeks seeing them at the top of the leaderboard and one week seeing them facing the dreaded dance-off.

After their dedication and hard work though, it seems their final show dream may be over if AJ’s foot doesn’t heal in time.

The determined contestant stated she would try everything she could to dance on Saturday, even if she hasn’t managed to rehearse.

Either way, one couple this weekend will be crowned winners, raising the Glitterball Trophy in place of current champions Bill Bailey and Oti Mabuse.

Strictly Come Dancing continues on Saturday at 7pm on BBC One.