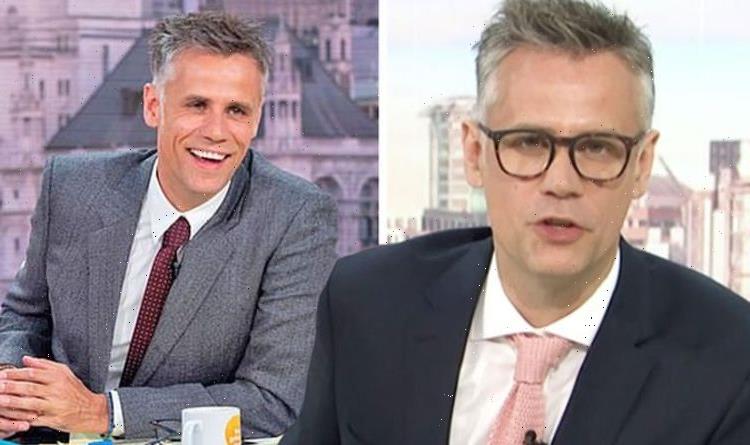 Good Morning Britain invited Richard Bacon back onto the show to present alongside Charlotte Hawkins. It has been two years since the television presenter fronted the news and chat show and those watching at home were thrilled to have him back – so much so, they called for him to become a permanent host on the ITV’s rota.

Richard said: “Good morning, it has just gone half past six, welcome to the programme.”

“Welcome to you!” Charlotte remarked. “Great to have you here.”

“Thank you Charlotte,” Richard continued. “Richard Arnold just said ‘Welcome home’ in the corridor and I was quite touched, it was quite sweet.

“It’s very exciting – you know that voiceover at the beginning which says ‘Live from Television Centre.’”

“The excitement building?” Charlotte wondered and he added: “It certainly does, it feels big doesn’t it?””

“You’re on live television right now!” She commented as the voiceover was played again.

Richard laughed: “There that! It feels a bit less big the second time.

“For me, I haven’t done this for a couple of years and I live in America now where I have a slightly silly job, basically presenting gameshows, introducing gameshows – which is a strange thing to do in the world – but to actually come back and do this, my first love is news and current affairs so to come back and talk about things that matter.”

“You’ve joined us on quite a week, there’s a lot going on at the moment!” Charlotte said.

“There’s so much going on in the world and stuff that is heartbreaking and in some ways, suffocating to witness,” Richard commented. “To be here and talk about to people we have on the show – the Home Secretary is coming up later.

“So to be in on a day like this, this is a fascinating thing.”

Charlotte mentioned: “It’s great to have you back, a few things have changed, post-Covid, we’re further away at the moment, so you get used to how things work. We are on the biggest desk in the world probably in a newsroom.”

“Do we shout at our guests?” Richard asked. “Kevin [Maguire], technically is quite a long way from me now.”

“You could use hand gestures,” Kevin said and Richard added: “Thankfully I can lip read, so I think i’ll be okay.”

One said: “So brilliant he is so good on this show please can he be full time good to see him back.”

“Yay love Richard Bacon. Can we have him full time please?” Someone else asked.

“Have to say I thought Richard Bacon was impressive in his questioning and manner,” one tweet read.

While another commented: “Hoorah, at last a presenter that challenges politicians from both parties, well done Richard.”