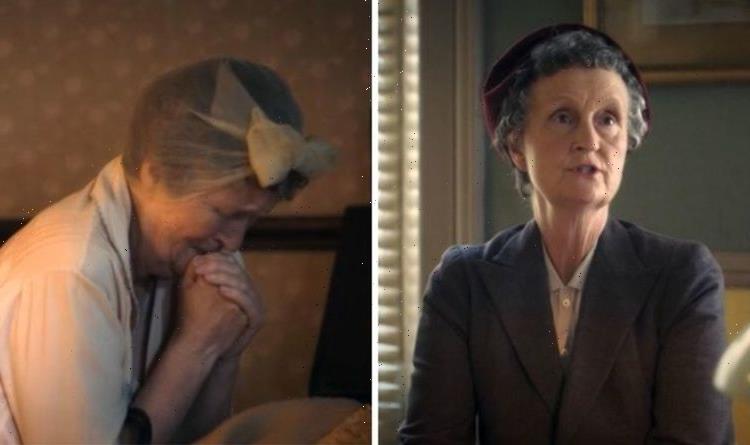 Call The Midwife stalwart Miss Higgins (played by Georgie Glen) could be heading into a very dark place in wake of a terrifying domestic ordeal. She was burgled and the crime has knocked her confidence, leaving her reliant on the Sisters and nuns at Nonnatus House. During the second episode of season 11, which aired on BBC One on Sunday night, fans witnessed the stoic character’s vulnerability for the first time in heartbreaking scenes. Will she manage to find a way to move on from the raid, or will she struggle to get back on her feet if she clings onto the memory for too long?

When Miss Higgins took a seat at her desk in the most recent episode of the drama she was asked by Sister Frances (Ella Bruccoleri) if everything was OK, however, she replied: “I think it’s perfectly clear that everything is in fact not all right.”

She then took a deep breath and told Doctor Turner (Stephen McGann): “I was burgled last night and I’ve just got back from the police station.

“I came downstairs this morning to find the living room ransacked, ornaments smashed to smithereens, great big muddy footprints smeared across my cashmere rug and there was a hole in my kitchen window.”

The concerned doctor told a distressed Miss Higgins: “Now you mustn’t even think about working today, you need to go home.”

However, she replied: “I will do no such thing – I don’t believe I can ever set foot in that building again.”

Sister Julienne warmly reminded her to make herself at home and explained she was welcome to stay for as long as she liked.

Later on in the episode, the nurses made up a bed in a spare room for Miss Higgins to reside in, however, she admitted to nurse Trixie Franklin (Helen George) that she was struggling.

“I’m sure you’ll feel better in the morning,” Trixie said to Miss Higgins as she made her way up to her bedroom.

But the night wasn’t any easier for Miss Higgins who was finding it impossible to drift off to sleep as she could not get the thought of the burglary out of her mind.

She lied on the bed clutching her handbag and a candlestick as a weapon in case she was attacked.

Nurse Phyllis Crane, who was sleeping in the bed next to Mrs Higgins, then woke up and asked if she was OK following the break-in but the usually-fearless character started sobbing.

DON’T MISS…
Jenny Agutter, 69, stuns in never seen before pics [MUST SEE]
Call the Midwife’s Dr Turner teases shock twist ‘It’s a departure’ [INSIGHT]
Give the gift of a lifeline to those in need [LATEST]

Miss Higgins said: “It’s not the loss of my belongings that upsets me, only small items were taken in the burglary and a little loose cash.

“All these years I have worked so hard to make a home for myself, to embrace my independence and it feels like a violation that intruders entered my house at night while I was sleeping.

“How will I ever feel safe again?”

Nurse Phyllis offered to lock the bedroom door in a bid to make a traumatised Miss Higgins feel better, but it looks as though the burglary will have a long-lasting effect on the character.

Call The Midwife fans took to Twitter sharing their concerns about how vulnerable Miss Higgins appeared, with Susan Seddon saying: “Sad to see Miss Higgins is not being herself in this episode.”

Another viewer added: “Poor Miss Higgins! I can totally sympathise, our house was broken into while we were asleep upstairs several years ago and any unusual noise would set me off for months.”

Chloe Stothers said: “Aww I’m so gutted for Miss Higgins being burgled really knocks you for six. I hope Nurse Crane looks after her, I love their friendship.”

Call The Midwife continues on Sundays at 8pm on BBC One and episodes can be watched on BBC iPlayer.