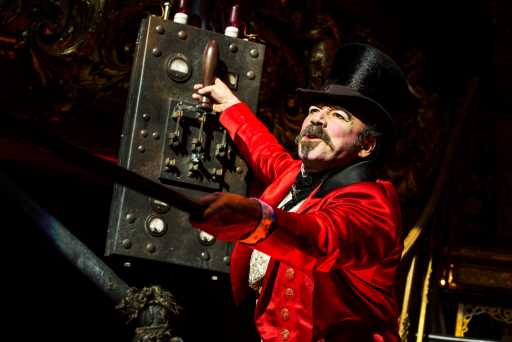 With the plug pulled on its Saturday night, Broadway got zinged with a 10% tumble at the box office last week. While other factors entered the equation – there were three fewer shows on the boards than the previous week – the cancellation of 26 individual performances due to the Manhattan blackout no doubt took a hefty toll.

Helping keep the slide less steep was Dave Chappelle, whose stand-up comedy show at the Lunt-Fontanne Theatre added $1,431,451 to the tally. Chappelle performed four shows of his two-week, 10-show stint (the cancelled fifth was rescheduled for Sunday, July 21), and though attendance was at 98%, the $1.4M gross was only 68% of potential (average ticket price was a weighty $244, with premium seats of $748 far exceeding all but the mighty Hamilton‘s $849).

In its final week, Burn This, starring Adam Driver and Keri Russell, played a full eight performances (the Hudson Theatre was one of four Broadway venues that stayed lit Saturday), grossing $897,621, a big $238G over the previous week. The Lanford Wilson revival was at 98% of capacity in its final week.

Joining Burn This on the week’s roster of sold-out productions (or nearly so, at 98% of capacity or more) for Week 7 were Ain’t Too Proud, Aladdin, Come From Away, Dave Chappelle, Dear Evan Hansen, Hadestown, Hamilton, Harry Potter and the Cursed Child, Mean Girls, Moulin Rouge!, The Book of Mormon, To Kill a Mockingbird and Wicked.

All figures courtesy of the trade group Broadway League.