The second season of “Bridgerton” is upon us and the Netflix series has made some changes. This time around, fans follow eldest Bridgerton son Anthony (Jonathan Bailey) as he tries to find a bride. He meets the beautiful Edwina Sharma (Charithra Chandran), but her protective older sister Kate (Simone Ashley) stands in the way. Plenty of the story is similar to the first season, but there is one big person missing: S1 breakout Rege-Jean Page — and his smoldering charisma.

Audiences have gotten used to losing their favorite characters off hit shows: Dan Stevens left his prominent role on “Downton Abbey” after Season 3. Doctors regularly rotate out of “Grey’s Anatomy,” and every few years there’s a new Doctor Who to look forward to on the BBC. But still, when Page announced he was not returning for Season 2, there was a collective gasp of disappointment.

For those that hadn’t read the books, the move was a surprise. The popular Regency romance series penned by Julia Quinn are all standalone tales, with characters from previous books only popping in if they foster the story. But if you’ve already consumed Season 2 of the Netflix series then you probably noticed how often Season 1 star Daphne Bridgerton (Phoebe Dynevor), who married Page’s Simon Bassett at the end of last season, popped into the narrative, leading to fan speculation that Page was originally going to be a far more prominent character going forward, despite what Netflix said at the time.

And it’s certainly easy to see why people wanted more. As an actor Page brought such sparkle and nuance to his performance. He wasn’t a rake in the typical sense, but a man so motivated by revenge to his family lineage that he refused to conform to the standards of the era. Because of that, the sexual component of his relationship with Daphne took on added significance. Maybe because the narrative felt fresh and new, and Page just had that X-factor, his absence is keenly missed and hangs like a storm cloud over what feels like a very basic Season 2, more heavily adhering to the world of PBS and Jane Austen then a steamy bodice-ripping romance novel.

Reviews for this installment of “Bridgerton” have been far more mixed than its premiere so let’s look at a few ways the series could reignite its spark for an already-renewed Season 3.

“Bridgerton” has always had trouble making the Bridgerton men interesting. If you followed social media when Season 1 debuted several jokes were about how Anthony, Benedict (Luke Thompson), and Colin Bridgerton (Luke Newton) all looked alike. The series has certainly tried to differentiate the trio with somewhat compelling storylines, from Anthony taking center stage in Season 2 to woo Kate Sharma to Colin’s cluelessness over being pined for by Penelope Featherington (Nicola Coughlin). But Benedict has always had a more difficult time standing out, mainly because both seasons of the show have been about him finding some type of interest. Of all the characters on the show he feels the most neglected, as if the screenwriters themselves aren’t all that interested.

In Season 1, Benedict spent time engaging in the bohemian lifestyle of being a painter, which generally saw him having sex with different people. This season continued that thread, albeit with Benedict just going to a snazzy painter’s school. Not the most compelling way to set up the star of your third season. Yes, Season 3 is focused on Benedict. Based on the novel, “An Offer From a Gentlemen,” we see Benedict try his hand at finding a bride…we’ll see if anything involving his painting will pay off here. The writers need to humanize Benedict outside of being a basic Bridgerton boy — give him some compelling traits that fans may want to, you know, discuss. 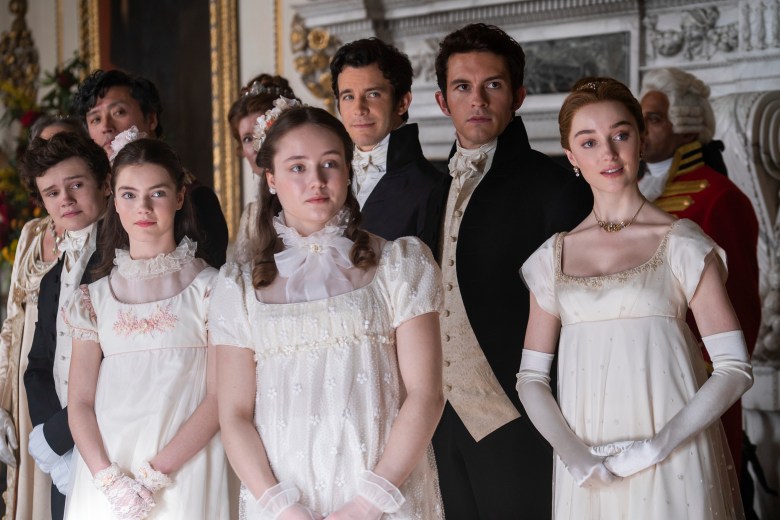 If they follow the third book, the third season is a Cinderella story complete with evil stepmothers and an extended two-year search as Benedict struggles to find a masked woman who’s captured his heart. We’ve seen this story 1,000 times and it’ll be a big enough challenge to make that story feel new. That being said, if Sophie Beckett — described as sassy, headstrong, and possessing an instant chemistry with Benedict — is cast right she could become the next breakout a la Rege-Jean Page. Part of why his relationship with Daphne worked so well in Season 1 is because Daphne was a blank slate looking for something to make her feel human. The same can be done with Benedict if Sophie is presented as a woman who challenges what he knows about women, relationships, and, probably, sex!

This season saw the Bridgerton clan just as unified and present as they were in Season 1. However, Daphne’s chronic presence in Season 2 also reminded us about Page’s absence. It also led to wondering if moments between Daphne and Anthony, as well as the return of Will Mondrich (Martins Imhangbe) — a boxing friend of Page’s Simon — were ways to cover up or insert Page prior to his exit. Either way, it drew audiences back to comparing this to Season 1 as opposed to trusting this season to stand on its own legs.

The best course of action would be to limit subsequent seasons to characters only in their standalone books. So if Daphne Bridgerton isn’t in Book 3, she shouldn’t be in Season 3. If the past is truly past on this show, make it so and stick with it. Thankfully, no one from this season’s cast has announced they’re leaving so this might not be a problem next time, but it might still be best to limit the Bridgerton clan. It would also cut down on the need to make sure the various storylines are all being serviced.

This could be more Netflix fatigue than anything else because last season also boasted eight episodes. But Season 1’s episodes never clocked in longer than an hour, with the exception of the finale which ran 72 minutes. With Season 1, only four of the eight episodes are under an hour. If the season were to focus purely on Benedict and the events in the third book the runtimes might not feel so padded. If the show wants to stick with eight episodes, please, stick with the under-60 minute runtimes of Season 1.

Those runtimes could have also felt longer because this season went for a more old-fashioned view of romance than we saw in the premiere season. When “Bridgerton” debuted there were more than a few anecdotal claims on social media that older family members were surprised by how often Simon and Daphne were romping without their clothes on. On top of that, add Anthony and Benedict’s storylines and there was a lot of sex happening for several episodes.

Season 2 decided to go for a more Austen-esque view of romance, featuring slow-burn lingering looks and finger grazes. It wasn’t until the penultimate episode that a sex scene even took place. The shift certainly felt noticeable — and not in a great way. Let’s be clear: Bring back hookups in Season 3. This show needs steams.