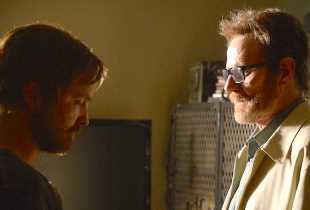 Series — and movie — star Aaron Paul revealed the news in a New York Times interview Saturday. The movie will be called El Camino: A Breaking Bad Story. Per the report, the movie’s logline states that “In the wake of his dramatic escape from captivity, Jesse must come to terms with his past in order to forge some kind of future.”

As previously reported, the feature-length sequel will first debut on Netflix (which holds the streaming rights to the original five seasons, as well as prequel series Better Call Saul), then get a later window on AMC.

It was previously reported that Paul was set to reprise his role as Walter White protégé Jesse Pinkman in a follow-up to the Emmy-winning drama. As BB fans will recall, Jesse’s journey ended after he broke free from Jack’s compound in the September 2013 series finale. In addition to writing and directing the movie, series creator Vince Gilligan is producing alongside fellow series vets Mark Johnson and Melissa Bernstein.

The film went into production in Albuquerque in last November. At the time, Bryan Cranston confirmed the existence of a Breaking Bad movie on The Dan Patrick Show, but said it was unclear whether the late Walter White would appear in the film.

In the Times interview, Paul would not say whether Cranston’s Walter will appear in the film. “All I can say,” he said, “I think people will be really happy with what they see.”