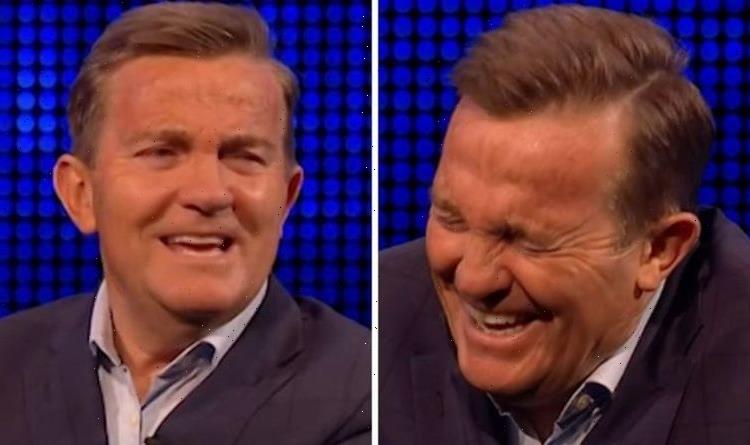 The Chase: Bradley Walsh cracks up during devil question

The Chase presenter burst into laughter and derailed the programme for several moments when he started to read out the options for the bizarre question. Thursday evening’s Chaser Paul Sinha was also tickled by the question, causing the ITV quiz show to briefly descend into madness.

Walsh asked contender Patrick to complete the phrase ‘He who sups with the devil should have a long… what?’

The idiom was originally intended as a warning for those who find themselves in the company of bad people, advising them to keep their distance.

However, the first option for the multiple-choice round took the host by surprise.

He began “A. Tongue”, and promptly let out a huge, gasping laugh.

His response drew laughter from the audience and Paul and Patrick couldn’t help but crack a smile.

Walsh quickly tried again but struggled to manage through a fit of giggles.

He shook his head and exclaimed: “That’s ludicrous.”

The presenter read out the first option once more and again let out a huge laugh before managing to proceed onwards.

He laughed through the second option, “B. Spoon”, and concluded “C. Think”.

Surprisingly, it was the third choice that made Chaser Sinha break his poker face and let out an appreciative chuckle.

Walsh and the audience then descended into even more laughter as Patrick considered his answer.

Patrick eventually went for option B, prompting the bemused host to inquire: “Really?”

The contender explained a spoon would make more sense than the other choices when dining with the devil.

His answer proved correct, and Walsh congratulated the player, saying: “That was incredible.”

Sinha provided a helpful explanation, saying the old phrase is an allegory for keeping one’s distance in the company of bad men.

For Thursday’s edition of the show, Patrick was joined by fellow contestants Afreena, Linda and Brian.

Sadly, Afreena was knocked out of the running after a challenging round with the Sinnerman.

However, the remaining players banded together and beat the Chaser, going home with an impressive £15,000 prize.

Walsh will be back one last time this week on Friday with four more players taking on a different quiz master for the chance of taking home thousands of pounds.