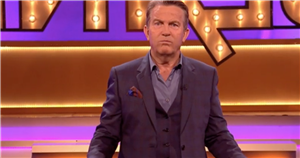 Presenter Bradley Walsh seems to be the man of the hour, as TV viewers noticed that he was on ITV and BBC One at the same time on Saturday night.

The popular host appeared on BBC's Blankety Blank but at the same time, he was also on rival channel ITV presenting Beat The Chasers.

One fan penned: "Bradley Walsh is presenting 2 quiz shows which are at the same time. Blankety Blank & Beat the Chasers."

While a third wrote: "Bradley Walsh is taking over the world… on BBC1 and ITV at the same time."

But this isn't the only surprising thing concerning the presenter.

Due to the fact that Bradley is currently starring in ITV's The Larkins on Sunday night and is also presenting daytime quiz show The Chase during weekdays, Bradley will be on TV everyday this week on two terrestrial channels.

Speaking about his career in a recent interview with Phillip Schofield and Holly Willoughby on This Morning the Dr Who star spoke openly about what he will do next once The Larkins comes to an end.

Phil asked: "So after [The Larkins] you’re off filming more Breaking Dad?"

Bradley replied: "Actually, I am, you’re right Phil. I’m off to Scandinavia."

He continued: "We’re off to Scandinavia and that’s been fantastic.

"I got a phone call this morning in the car from a couple of companies for me to go New Zealand, saying 'Can we please bring Breaking Dad to New Zealand?'"

"They’re desperate for it, it’s a big hit in New Zealand," he shared.

Bradley stars alongside his son Barney Walsh for the much-loved series Breaking Dad.

The series showcases the comedian and his son's loveable bond as they embark on a road trip across several countries.

Since it began 2019, all three series have aired- all of which were narrated by Pointless presenter Alexander Armstrong.

ITV have not yet confirmed the date of when the new series will be released.