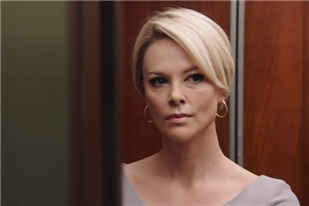 The Fox News movie about the downfall of Roger Ailes has a first look teaser and a new title, officially called “Bombshell.”

Charlize Theron, Nicole Kidman and Margot Robbie star in the film as Megyn Kelly, Gretchen Carlson and Kayla Pospisil (a fictional news producer) in the film directed by Jay Roach and written by “The Big Short” writer Charles Randolph.

The film will tell the story of the Fox News sexual harassment scandal from the point of view of the women who took on the toxic male culture of Fox News, ultimately leading to Ailes’ downfall.

Ailes resigned from Fox News in 2016 after Carlson filed a sexual harassment lawsuit that resulted in multiple women coming forward with similar claims. At the time, Ailes was considered the mastermind behind the success of Fox News and one of the most powerful men in both media and American politics.

Take a look at the first teaser above, which features the three stars quietly and anxiously riding an elevator down to the second floor of the Fox News Channel as they’re about to drop their bombshell accusation.

Donald Trump’s favorite network, Fox News, isn’t always rosy on what he says and does, especially when he backs Russia over the U.S. intelligence community

It’s been known for a long time that Donald Trump is a fan of Fox News. And, in turn, the conservative network is a fan of his, often running positive stories about the administration that Trump then uses to fuel his Twitter feed. But Fox News isn’t always on board the Trump Train. Here are 17 times Fox News gave Trump the business.